The participants, which include ham-maker Parmacotto and supermarket operator Auchon, tracked tagged cases of food as they moved from production to sales floor.

Oct 27, 2008A large-scale Italian pilot project organized by the University of Parma's RFID Lab has quantified the benefits of using RFID tags to identify and track 12,000 cases and 800 pallets of sliced ham, sandwiches and other fresh food as the goods moved from production to the retail sales floor between May and September. 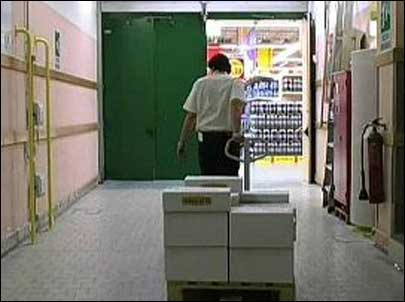 To monitor the shelf replenishment process, an RFID reader was installed in the hall connecting the store's back room with the shop floor.

The group began planning the pilot in 2007 (see Parma's RFID Lab Plans Pork Pilot). The results of that pilot were announced at a conference in Italy in early October by Antonio Rizzi, a full professor of industrial logistics and supply chain management at the University of Parma. Rizzi is also the founder and head of the RFID Lab, and the pilot's director.

Rizzi separated the pilot results into two categories: technological and managerial. As goods moved from Parmacotto's logistics base to Auchan's distribution center (DC) and two of its stores, the case and pallet tags were read at various points. At Parmacotto's warehouse, UPM Raflatac and Avery Dennison RFID tags were encoded with 96-bit Electronic Product Codes (EPCs) incorporating serialized global trade item numbers (SGTINs) and attached to cases of goods. The cases were then loaded onto a pallet that was fitted with a tag encoded with a 96-bit EPC containing a serial shipping container code (SSCC), and the case and pallet tags were read. The second read point was at the shipping door, when the pallet and cases passed through the RFID portal and were loaded onto a truck. At that point, the order was checked for accuracy, using the RFID data to compare the actual goods on the pallet with the information on the bill of lading.


At the retailer's DC, tags were read at three points. The first read occurred when a pallet was received through the fixed RFID portal at the receiving door. The DC downloaded tag data collected previously by Parmacotto's RFID system using an application complying with the EPC Information Services (EPCIS) standard, then compared that information with the tag IDs read at the receiving door, thereby verifying that all goods were accounted for. New Discovery Services, Rizzi says, have been implemented to make it possible for the receiving party to automatically find and retrieve data stored in a supplier's EPCIS application.

After the cases were cross-docked and new pallets were created for delivery to the two stores, the case tags were read with handheld RFID interrogators, and aggregated to pallet-level SSCCs. The final read point was a fixed RFID portal through which the outbound pallet moved as it was being loaded onto a truck. Once again, the pallet's contents were checked for accuracy. 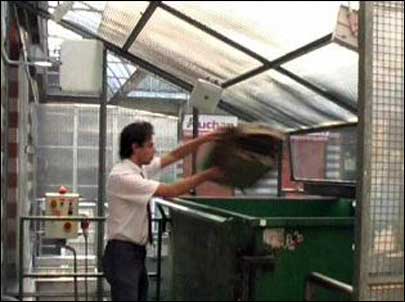 An RFID interrogator mounted above the trash compactor read the tags of empty cardboard cases.

At the store, the case and pallet tags were interrogated at three points. The first read was performed during the receiving process, as the pallets passed a portal reader at the dock door. The second was conducted during the shelf-replenishment process, using a fixed interrogator installed in the hall that connects the store's back room with the sales floor. The system employed photoelectric cells to determine whether the tagged goods were moving on or off the retail floor. "We experienced some issue in the replenishment process," Rizzi says, adding, "The high traffic of pallets during stocking in the early morning sometimes made it difficult to understand the real movement of goods at the store, so we decided we needed a further read point."

The project's partners then added a final read point at the trash compactor. When empty cardboard cases were discarded, an interrogator mounted above the compactor read their tags, signifying that the goods were on the store shelves. "This point has proved to be a very reliable solution with almost 100 percent read accuracy," Rizzi states, "when comparing data about cases read at the trash compactor against data on cases delivered to the store."

At Auchan's DC, 100 percent of the pallet SSCC tags and 96 percent of the case SGTIN tags were read successfully by a fixed-position RFID portal. The read rate of the case tags increased to 99.4 percent by using handheld interrogators and manually checking for missing reads. The pilot showed that approximately 86 percent of pallets received were read with 100 percent accuracy—that is, all cases expected to be on each pallet were automatically read by RFID portals. Only 14 percent of the pallets shipped or received required a manual check for missing case tags.

The handheld reader displays a message informing the operator which EPCs have not been read, helping him to locate the cases on the pallet. Consequently, by utilizing handheld interrogators in conjunction with portal readers, the participants could read 100 percent of the case tags.


Almost the same case-level accuracy performance applies to the receiving portals of the two stores, with 94 percent and 91 percent accuracy at case level, respectively. As far as the replenishment process is concerned, performance was not accurate enough to estimate reliable sale data. At the store in Curno, for instance, 75 percent of cases received were seen in transit from the back room to the store floor. Conversely, the trash compactor read point showed nearly perfect accuracy, with 99.5 percent reads of expected cases.

The use of RFID led to a 68 percent reduction in the time required to check the quantity and mix of goods shipped, as well as an 80 percent reduction in the time necessary to receive them. The results were calculated by comparing the time needed for the RFID-based processes with that required for the usual receiving processes, such as manually counting and identifying boxes on pallets.

The results were based on the 578 pallets shipped when the process worked properly, and omitted situations in which pallets were shipped when the software was experiencing a glitch, or when the work process was temporarily changed. Rizzi and his team then took the pilot results and applied them to the business case. "We wanted to know what the results would mean for the manufacturer, for the retailer and for the supply chain as a whole," he says.

From a managerial perspective, the pilot showed, through various calculations, that by employing RFID, a food manufacturer like Parmacotto could reduce the cost of order selection processes and save approximately €52,000 ($65,000) on an annual basis. That figure is based on roughly €65,000 ($81,000) in savings, offset by €13,000 ($16,000) in additional costs. Savings took into account a reduction in the time needed for such processes as bar-code readings during the picking process, and the manual counting of pallets. Savings from a reduced number of shipping mistakes and lower out-of-stock periods were also calculated into the benefits. Added costs resulted from the time required to utilize a handheld reader to scan the tags manually in order to improve the 86 percent accuracy of pallet reads from RFID portals.

By automating receiving, a retailer could save €141,000 ($175,000) by reducing the time necessary to receive products at the dock door, and by eliminating the need to manually input data for bill of ladings at its DC, since that information was available online. This value was determined through a similar calculation, as described above. What's more, actual receiving time was reduced from 9.5 minutes to two minutes per pallet. "The benefits of RFID look like an iceberg," Rizzi says. "The biggest benefits are not visible." These include reduced safety stocks, the automation of administrative processes and improved customer service.

One hidden benefit would be a 30 percent reduction in the amount of safety stock a company must hold in reserve to meet changing demand. The savings come from real-time visibility of stock levels provided by RFID at the store. This visibility reduces the so-called bullwhip effect the manufacturer faces, by meeting demand based on order forecasts, rather than on actual sales. Rizzi calculated that safety stocks could be reduced by almost 30 percent, by forecasting demand through RFID-derived sales data instead of orders placed every two days. This reduction, he says, could save a manufacturer like Parmacotto roughly €52,000 ($65,000) each year.


According to Rizzi, the pilot proved radio frequency identification can add value not only to logistics and supply chain processes, but also to other business processes. For instance, he says, the technology proved to be a viable tool for automating invoicing through RFID proof of delivery. "We statistically demonstrated from the field that sooner or later, a case shipped from the supplier to the retailer will be read at a retailer's read point. Data collected at that reading could thus be used to initiate an automated invoicing process, avoiding all administrative costs of managing invoicing manually and rectifying discrepancies," Rizzi says. "This could save a retailer like Auchan about €135,000 [$168,000] a year, and a manufacturer like Parmacotto about €65,000 [$81,000] a year."

As far as the customer service issue is concerned, RFID provides information that is currently otherwise unavailable, such as product availability and freshness. "As an example," Rizzi explains, "through store read points, we were able to punctually assess the residual shelf life of each case taken to the shelf. For a product expiring in 30 days, it is important to grant the customer the longest possible residual shelf life. During our tests, we were able to determine that goods were on the shelves an average of 25 days."

Based on a variety of similar calculations, Rizzi determined a return on investment for each type of company involved. "A manufacturer such as Parmacotto could actually realize a negative ROI by tagging all cases produced," he says. "The manufacturer is, in fact, burdened by relevant tagging costs. These costs cannot be balanced by internal efficiency improvements. These figures could be completely different if the potential benefits from visibility and out-of-stock reductions were high enough."

In addition, Rizzi calculated that the ROI could be as high as 75 percent during a five-year period, based on Parmacotto's annual sales of €150 million ($186 million). A DC could achieve 155 percent return on investment, and a retail store may get as much as 60 percent ROI.

Project participants are interested in continuing the work in 2009, with a pilot involving different manufacturers and a wider variety of products. Such a pilot, Rizzi notes, may employ RFID in conjunction with sensors to track temperature and humidity levels.