The project's purpose is to determine if facial-recognition software can be used to pick out known criminals from a crowd moving through a train station.

Oct 30, 2006Germany's Bundeskriminalamt (BKA), or Federal Criminal Investigation Office, is using RFID as part of a test of facial-recognition software. The trial began this month and will last until January.

The country's Federal Ministry of the Interior authorized the test in mid-February, which is being held in the main railway station in Mainz, a city not far from Frankfurt. The project gained new relevance in August when police foiled a plot to blow up regional trains in Germany. Video monitoring of passengers in train stations played a key role in identifying the attempted terrorists. 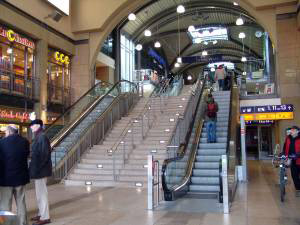 The facial-recognition system will try to identify the participants in the test by measuring their jawbone and other facial features.

The BKA says the purpose of the test is to find out if biometric facial-recognition software can be used to pick out known criminals from a crowd of moving people—without mistaking innocent citizens for the guilty parties.

Working with three commercial technology vendors (which the BKA declined to identify), the organization set up six cameras to monitor an escalator and part of a stairway in the station. The system will save photos of passersby and 200 volunteers carrying RFID-enabled smart cards on their daily commutes. The system interrogates the cards' embedded RFID tags each time participants pass through the test zone. The BKA will not reveal any additional technical details about the RFID system, such as whether tags are UHF or HF, passive or active. Anke Schwalbach, a BKA spokeswoman, says releasing such information might harm the project because it could help vandals interfere with it.

The facial-recognition system will try to identify the participants in the test by measuring the jawbone and other facial features in images taken by the six cameras, then comparing the results with those based on photos previously taken of the volunteers and stored in a database. Facial-recognition software is still considered unreliable, so the test is intended to determine the accuracy of the software. Its ability to accurately identify volunteer participants passing through the station will be compared with RFID data collected by the interrogators reading the participants' RFID tags.

Joachim Koehler, department head of the NetMedia research division at the Fraunhofer-Institut IAIS, says the accuracy of facial-recognition software declines as the number of photographed people rises. If 50 photos in a database are matched, for example, the accuracy rate is usually about 90 percent. However, when this number increases to 500, the success rate declines to 50 percent, according to an article published in the German daily newspaper Sueddeutsche Zeitung. RFID accuracy rates, on the other hand, can be higher than 99 percent.

Data privacy and personal privacy are highly prized in Germany. Therefore, the BKA has designed the test so those who do not wish to be photographed can circumvent the test zone. Citizens can view the test zone in a photo on the BKA's Web site.

"The only data saved on the RFID tag is the ID number of the participant," says Schwalbach. Furthermore, photos of passersby not participating in the test will be deleted after 48 hours, and data collected will be seen only by BKA employees working on the test. Test participants will receive a small gift upon completion of the trial.