Feb 04, 2013Scientists at GE Global Research are working with the U.S. Department of Veteran's Affairs (VA) to develop an automated system for sorting, cleaning, sterilizing and transporting surgical tools at VA hospitals. The solution is expected to include several forms of robotics designed to move tools through the sterilization process, as well as to and from operating rooms, along with radio frequency identification technology to enable some of the functions, by identifying the locations of individual tools or kits filled with tools.

In 2011, the VA launched an initiative to reduce the incidence of errors in sterilizing surgical tools, in order to better protect patients from infection. The agency issued a request for proposals, and in September 2012, GE Global Research—the technology development division of General Electric Co.—won the $2.5 million contract with its plans to develop a system using what it calls a mash-up of technology that will be tested at a VA hospital in two years. 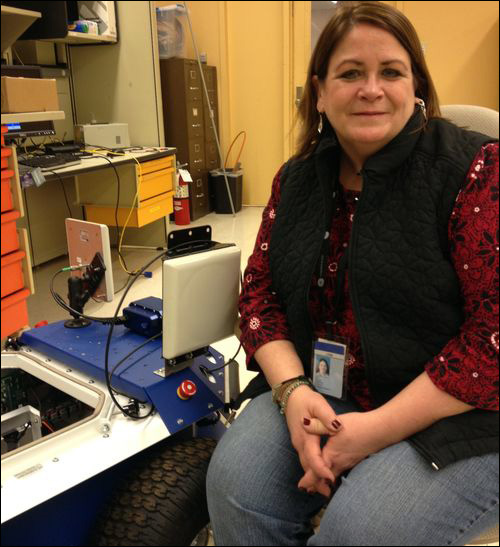 Lynn DeRose and a blue robotic vehicle that she and the team have named Tesla, and are considering using for kit delivery to the operating room

RFID is expected to be used to ensure that the proper tools are in the correct kits at various points throughout the sterilization processes, as well as to create a record of the processes completed on those tools.

GE Global Research's challenge is to replicate the hospitals' business processes, according to Lynn DeRose, the company's principal investigator on the project, which will take place at the firm's facility's in Niskayuna, N.Y. The solution will aim to automate the cleaning and sterilization procedures for surgical tools, without interfering with the OR staff's work processes. To this end, GE Global Research's scientists are initially working with research teams at the VA to determine what these exact processes are at a variety of facilities.

"Part of our effort is to develop sophisticated modules for improvement" of existing practices, says John Lizzi, the manager of GE Global Research's Distributed Intelligent Systems Laboratory, where the work will be conducted.

The solution will not only employ robotics to automate the cleaning and sterilization processes and to transport the tools, but it will also, in conjunction with automatic-identification technologies and computer vision, identify the specific tools undergoing the processes. Bar codes would not sustain sterilization, DeRose says, or be easily read when the tools are dirty and not in direct line of sight with a scanner; what's more, the system would require that tools be identified in a kit, even after that kit is sanitized and sealed.

Decisions regarding the specific technology to be used, and at what point in the process this will occur, will be part of the two-year development stage, DeRose explains. But in general, the system will allow for the automated collection of tools and their delivery to the sterile processing center following surgery, sorting, cleaning, sanitization, kit building and sterilization, followed by storage and then delivery of the sterile tool kits to doctors as needed again within the OR. There are likely to be humans working along with the automated solution, she adds. RFID could help ensure that the correct tools are in the proper kit when undergoing specific processes, and could also be used to help guide a robotic delivery service as it transports the tools between storage and the operating room, or between the OR and the sterile processing center.

A robotic device on wheels could first pick up a kit filled with soiled tools post-surgery, and later return the kit and tools to the dirty side of the sterile processing center. GE plans to test a variety of scenarios, including a robot using RFID for path planning with a built-in reader and tags deployed around a facility to help guide its movements. In a YouTube video posted by GE Global Research, DeRose demonstrates a robot fitted with a Trimble ThingMagic reader and RFID antennas as an example of the sort of technology that could be utilized. Although several robots have been built for research purposes, DeRose notes, they are likely to look very different once completed. 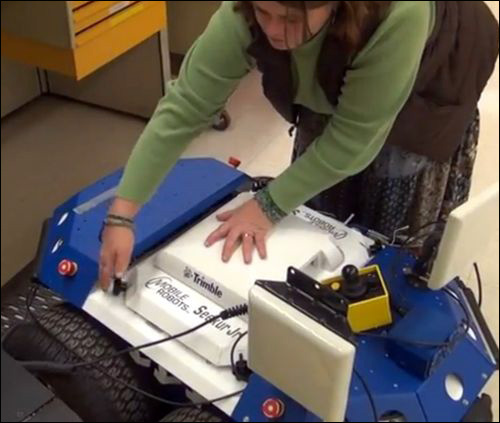 In a YouTube video, DeRose shows a robot fitted with a Trimble ThingMagic reader and RFID antennas as an example of the sort of technology that could be used for the VA project.

Typically, multiple kits of tools are used for a particular procedure, and the tools leaving an operating room are thus not necessarily sorted into the proper kits at that time.

A stationary robotic arm could remove the soiled tools from the kits and—based on the type of instrument and the kind of cleaning process to thus receive—place each item on a conveyor. To identify the tool type, the system could employ a reader to capture the unique ID number encoded on a passive RFID tag affixed to that object. All tools undergo a wash, rinse and sanitization process, which could be accomplished via a robotic arm and specialized fixture. The ID number, stored in software developed by GE Global Research, could be linked to details about each item. The tools can then be directed on a conveyor to the required sanitation cycle, according to each tool's ID number. Once the tools are sanitized and dried, they would be moved to the clean side of the sterile processing center, for incorporation into kits. Based on the kit requirements indicated in the software, the robotic arms will then reconstruct the kits using the tool IDs to ensure that each kit is complete as required.

During the kits' reconstruction, DeRose envisions that an RFID tag attached to each kit will be linked in the software with the RFID numbers of tags on the specific tools within the kit. Using that data in the software, the system would then utilize personnel or robots to replace the proper instruments in the kits, after which the kits would be closed and sealed using a robotic arm and fixture. The sealed kits would then be sterilized in autoclaves, using steam at high temperature and pressure. (Sanitation removes proteins that might remain after washing, while sterilization kills any germs or microbes that may be inadvertently introduced as the kits are built.)

Following sterilization, the kits would be placed into inventory until required. Software could then store data about each process step completed for each tool, based on the tag reads during cleaning, sanitization, sterilization and inventory.

When a kit was needed for surgery, a mobile robot could place it on a stainless steel cart with an active RFID tag attached to it. The kit's tag ID would be associated with the cart ID in the software. A real-time location system (RTLS) could employ readers installed within the hospital's corridors or operating rooms, to capture the ID number of the cart's tag and determine that cart's location in real time. Passive tags could alternatively be used, with passive RFID portals installed to track the cart's passage from the storage area to an OR.

If the cart were a self-guided, robotic device on wheels, DeRose says, active RFID tags could be used for path planning and locating. Alternatively, her team will also look into other technology, such as computer vision to map out the device's expected route, and to ensure that it remains on that path.

DeRose expects there to be four validation points at which RFID tags on kits and their contents would be read using an RFID interrogator to ensure that the correct kit and tools were at the right location. Those validation points, she says, could include a location just prior to delivery to the OR, in the surgical room (to record the kit's contents upon arrival, as well as after surgery when leaving the OR, and finally at the cleaning area (to confirm which tools and kit have arrived for cleaning).

All details are still open for consideration, however, DeRose says. Because GE Healthcare and GE Global Research have a range of RFID readers and tags already on hand, the researchers plan to test a variety of hardware options prior to building a prototype, and they may also opt to test hardware not previously used by GE. Once the prototype is completed in 2014, it will be demonstrated at a VA hospital for three months, in order to obtain feedback from a variety of VA hospitals and personnel. The commercialization, business plans and return on investment (ROI), she adds, will all be developed during the course of the project.

While the solution is intended to reduce infection rates, DeRose says, many more benefits have been identified, including an improvement in the efficiency of surgery and scheduling, since kit accuracy is higher and instrument-counting time is lower. Moreover, the system could reduce setup and room turnaround times, as well as optimize inventory accuracy.