For Fleye, Capturing Action Videos Is No Obstacle

The company is using RFID to manage the recording process during the Spartan Races series of extreme foot races, and to allow participates to view and share their moves.

May 17, 2013Approximately 18 months ago, snowboarder Cam Miner founded Fleye, a company that combines video and radio frequency identification technologies to allow active-sports enthusiasts like him to capture, view and share their moves online. While there are several businesses offering RFID solutions linking an individual equipped with a tag to still photo images at events and ski resorts, Miner envisioned a system that would go one step further, enabling users to view and share videos of themselves launching off a jump at a terrain park, climbing over an obstacle at a race or riding a roller coaster at an amusement park. The solution could also be used to show participation at a concert or sporting event.

Fleye has piloted a fixed version of the solution at ski resorts in Massachusetts, New Hampshire and Colorado, as well as at New Hampshire's Rye Airfield indoor skate park, and is now providing a mobile version of the system to a total of 40 Spartan Race extreme foot races held throughout the United States. To date, the system has been used at 12 such events, which range in length from three to 12 or more miles, and are strewn with multiple obstacles. 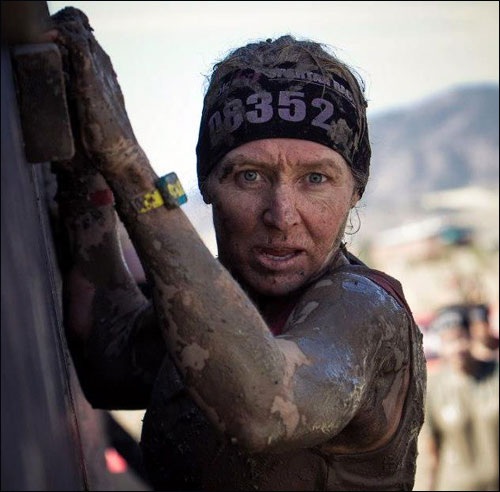 For the Spartan Race series, Fleye provides wristbands featuring an active RFID tag that can be read despite the presence of mud and an environment crowded with participants.

Miner's professional background is in developing advanced camera systems for surveillance. With the advent of Fleye, he has ventured into a recreational use of the same technology. In this case, however, he wanted to link each video to the appropriate individual, and enable that person to share the video with others via social networking. To make that happen, he turned to RFID technology.

Versions of the solution were tested at two ski resorts during the 2011-2012 winter season, and the technology has more recently been trialed at a New Hampshire skate park. The system consists of a dozen or so cameras installed at high-action locations throughout the resorts or park. The high-definition cameras come with motion sensors to identify when to begin shooting, and then send video data back to a server, via a Wi-Fi or Ethernet connection, where Fleye software determines how to distribute that video. Fleye tried several RFID systems to find the right match for each deployment. At the ski resorts, the firm installed custom RF Digital ultrahigh-frequency (UHF) active readers at a choke point at which users congregate prior to entering the area being recorded. After finding that the read range with active UHF tags was too great, Fleye trialed EPC Gen 2 passive UHF tags from Zebra Technologies and a Nano UHF reader module from TagSense. At the skate park, where read range needs to be short, Fleye provides users with a wristband containing a 125 kHz low-frequency (LF) RFID inlay, which is read using a customized LF reader. In each case, upon entering the park and receiving their wristbands, users provided their own e-mail address at which they wanted to view the video. That data was then input and synchronized with the wristband tag's unique ID number, stored in Fleye's software.

When a user is about to enter an action section in which recording takes place (such as a jump or halfpipe), he or she taps the wristband against the reader, which transmits that ID to the Fleye server via a Wi-Fi Internet connection. The camera's built-in motion sensor triggers the recording, and that video is then sent via Wi-Fi to the back-end system, and is linked to that visitor's wristband ID, which had been read immediately prior to the recording.

The user then proceeds to a viewing station installed at the park with a large-screen monitor. The station includes another RFID reader that interrogates the wristband's ID number and forwards that information to the software on the Fleye server, which then delivers the video footage to the station's screen. To view the video at home or on his or her smartphone, a user could then visit Fleye's Web site and input the ID number also printed on the wristband.

While users could be asked to pay to view the videos, access is available for the pilots at no cost to users until it expires. At that point, the videos are removed from the site, typically after 30 days.

For the Spartan Races, held throughout this year, Fleye devised a mobile solution that can be quickly installed and then be taken down after a few days. In such a scenario, Miner says, a Wi-Fi Internet connection is not always an option, and data in some cases must thus be stored locally and uploaded to Fleye's server at the end of each day. At the Spartan Races, instead of capturing individuals sweeping past on skis, snowboards or skateboards, the Fleye cameras are recording individuals as they do such things as climb through mud, crawl under barbed wire or jump over fire. The company is using a multifrequency (304.2, 309.9 and 314.26 MHz) J-Chip active RFID tag from Micro Talk Systems to enable a precise pinpointing of each individual passing the camera. In the case of the Spartan events, he explains, multiple people can be within range of the reader simultaneously, and the J-chip tag can be read despite the presence of mud and a crowded environment of many tags. Fleye can then provide video footage to everyone located within camera range at that time.

This year, Fleye has also been providing the video to users' e-mail addresses or social-network accounts. In this way, once the video is uploaded, a URL link for that video is immediately forwarded to an e-mail address or posted on a user's selected accounts, such as Twitter or Facebook.

Since Fleye began providing its technology at Spartan Races, the company's server has been visited by 250,000 people, with 418,000 video views, and each visit averaging two minutes and 37 seconds. Each video clip is typically 15 to 20 seconds in length, though Fleye expects its Web site to deliver advertising content or videos, which could defray part of the service cost, making it less expensive for parks, resorts or other venues, as well as for users who might otherwise be charged for the videos.

Additionally, the company is attempting to develop relationships with potential content sponsors, such as energy drink and automotive companies, camera equipment providers or other firms whose brand could be advertised using the video solution.

Fleye is currently in discussions with several theme parks and water parks, as well as a professional football team, to provide a solution allowing spectators to acquire the wristband upon arriving at the game, and to then have videos of their experiences at the game captured and displayed on a large screen, or shared with friends via social networks.