RFID technology providers are starting to develop lower-cost solutions that their customers can use to start down the adoption path.

Dec 01, 2006For a large retailer with, say, 25 distribution centers and 1,500 stores in North America, it could cost upward of a quarter of a billion dollars to put interrogators at every dock door in all its DCs, every receiving bay at the stores, and every door between the back of the stores and the retail floor. To put RFID interrogators on every shelf and every checkout counter would cost an astronomical amount. Retailers simply don't have that kind of money to invest and that appears to be delaying RFID adoption.

Some RFID hardware vendors that were expecting to get large orders of fixed interrogators as retailers rolled out the technology to their DCs and stores now realize that those orders aren't coming. The vendors are changing their strategy and starting to create solutions that are less expensive to deploy and can be used right away to deliver business benefits. 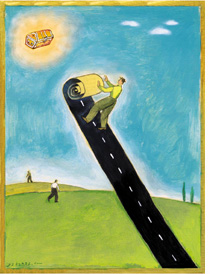 If end users can deploy an inexpensive system that delivers a return on investment, they can justify expanding the rollout.

These solutions won't deliver all of the benefits RFID could deliver if deployed at every door and on every shelf, but they aren't meant to. Instead, they are meant to be a sort of bridge between no adoption and the ubiquitous use of RFID. If end users can deploy an inexpensive system that delivers a return on investment, they can justify expanding the rollout. If the additional equipment deployed delivers an ROI, they can buy more interrogators and tags until, one day, RFID has permeated their operations.

Symbol Technologies has introduced a mobile interrogator that was originally designed for forklift trucks. Putting interrogators on forklifts is cheaper than putting interrogators on every dock door. But Symbol quickly realized that its forklift interrogator could be used on conveyors, carts and other devices, so it calls the device a mobile reader. End users who have tested or purchased it say they like it because it has a built-in antenna and can transmit data to a network wirelessly, both of which reduce cabling costs.

A few years ago, retailers thought handheld RFID interrogators weren't useful because the whole point of RFID is to automate data collection and take people out of the loop. But retailers now see handheld interrogators as an inexpensive way to take inventory on shelves. Vendors are responding by making handhelds easier to use and by embedding Wi-Fi capabilities into them so data can be uploaded as it is collected.

WJ Communications has shrunk the major analog components used in RFID interrogators into a set of microchips 8 millimeters square. This chipset can be used to reduce the size and cost of mobile interrogators, RFID modules for label printers and, eventually, fixed interrogators.

ADASA has developed a wearable device that can encode tags on the fly. It has a reusable cartridge that can hold up to 500 RFID labels measuring 1 by 4 inches. The unit, dubbed the PAD3500, encodes the preprinted labels with data using a battery-powered reader/encoder. This enables someone to pick a product and encode an RFID label for it at the shelf, without having to walk back to a label printer.

The PAD3500 is designed to be an interim solution. That is, it can be used today as a cost-effective way to tag a limited number of products for companies that aren't yet ready to encode, print and apply millions of RFID labels to products on a high-speed assembly line.

Other RFID hardware vendors will, no doubt, introduce new products aimed at helping end users leverage RFID without making a huge investment in the technology up front. End users can look forward to more solutions that meet most, if not all, of their needs and help them achieve a return on investment.