Impinj's new reader is installed in ceilings, where it can keep an eye on tagged assets and inventory in stores, hospitals and shipping facilities.

Jun 17, 2013Most retailers take inventory once or twice a year, often closing the store and marshaling an army of employees with bar-code scanners. But those that have adopted RFID now take inventory weekly, daily or every morning and evening, because a few employees equipped with handheld readers can do the job more efficiently. The result—improved inventory accuracy and reduced out-of-stocks—has been very beneficial, but the process still takes sales associates' time away from other tasks, and it's possible for a handheld, with its relatively short read range, to miss some items. So, some retailers began to wonder, what if we had an RFID system that could automatically monitor a wide area of the store in real time, 24/7?

Impinj worked with a retailer to develop and test such a solution, says Tracy Hillstrom, senior manager for the company's reader product line. It's called the xArray. Install the reader in a ceiling, plug it into a Power-over-Ethernet (PoE) connection, and you'll always know not only which items are on the sales floor but also on which shelf they sit and whether they have been moved. 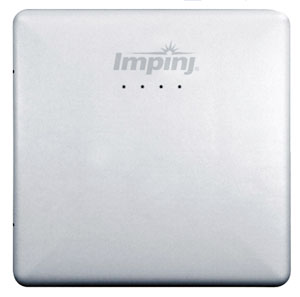 The xArray packs an Impinj Speedway Revolution 420 reader and an antenna array into a unit that measures 18 inches long and wide and 2.5 inches thick. When installed at a ceiling height of 15 feet, the device creates a circular read field 40 feet in diameter divided into eight sectors, with each sector subdivided into six read zones. Directly below the antenna is another read field comprising a circle 10 feet in diameter, divided into four overlapping oval-shaped read zones. The result: The xArray can read all the passive EPC Gen 2 tags within a 20-foot radius and discern in which of the 52 separate read zones each of those tags is located.

The retailer that worked with Impinj on this project installed one unit at the transition point between the store's back and front rooms, and mounted a second unit above the sales floor. "They said they could see better on-shelf availability and accuracy by using this product, rather than have someone use a handheld," Hillstrom says. "The store had what the customers were looking for, and you could see this uptick in revenue growth that in some cases could be 5 or 10 percent."

Since developing the system, Impinj says logistics companies have expressed interest in xArray's ability to monitor wide areas. "I talked with some of our customers that do a lot of LTL [less than truckload shipping]," Hillstrom says. "They want this kind of thing because at the end of the day, when a pallet moves from side A of their cross-dock facility to side B and makes it onto the wrong truck, it costs them a substantial amount of money to get that turned to the right place, and they've missed their commitments to their customer."

Currently, those logistics companies are using RFID portals. "They don't want antennas built around the door like you have today with traditional dock door systems," Hillstrom says. "That's based upon a confined read zone, and all of that is too hard for them to manage. The antennas have to face out, and they tend to get damaged in that kind of environment. So for them, it's not the right solution. They want an overhead solution. They want to be able to track their pallets, to see where they are and be able to confirm they went in the right dock door." In addition, she says, if they RFID-tag forklift trucks and personnel, logistics companies could use the xArray system to know which vehicles and drivers are moving the pallets.

"The other place we are seeing a strong play is in health care," Hillstrom says. Some hospitals are considering Wi-Fi-based real-time location systems to track infusers, wheelchairs and other assets, but they would need to install more access points to support such a system. What's more, she says, Wi-Fi RFID tags can be expensive, and they present battery-management issues. 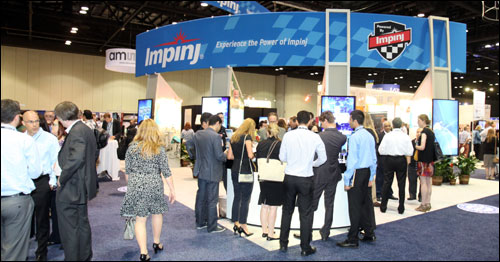 When discussing the xArray with hospital administrators, Hillstrom notes that a passive EPC Gen 2 tag costs just a few dollars. "That's when their brain explodes," she says. "First of all, they think, it gets all these tags off their Wi-Fi…. They've got to put in infrastructure anyway, so for them to put in an easy infrastructure drop-in with a PoE solution, it's not that big a deal. Then, they talk about tagging more—'What could I do if I could tag all that cath lab equipment that goes obsolete or gets recalled and I've got to dedicate a person to do nothing but check if one is obsolete? And how about if I could find that faster and easier? What would that mean for our business?'"

Impinj customers may have to wait a year before they find out. The company plans to launch xArray commercially some time in 2014. Meanwhile, a select group of authorized resellers and systems integrators participating in its early-access program will each receive two xArray units.

"Once they get the units, they'll start to do prototyping and demos with their customers," Hillstrom says. "We're signing them up now, and we'll learn from them. The reality is, we can start producing in two months, but if solutions are not wrapped around xArray, nobody is going to be ready to sell it. End customers are going to want the interfaces. It's not enough to just get the tag reads and some basic information about them. You've got to turn that data into dashboards that allow end customers to make business decisions, and that's what our solutions providers do."