Apr 17, 2012Bombardier Transportation, the rail equipment division of Bombardier Inc., will demonstrate an RFID-enabled rail-worker safety solution this year in Atlanta, in partnership with the Metropolitan Atlanta Rapid Transit Authority (MARTA). The system will be installed on MARTA's Green Line, between the Bankhead and Ashby stations, later this year, after the agency receives approval from the Federal Transit Administration (FTA), an agency of the U.S. Department of Transportation (DOT) that is funding the project. The FTA selected the system for trial, hoping to learn whether the technology could reduce the risk of accidents involving rail transit workers and trains. Bombardier's TrackSafe system, slated for demonstration by MARTA, was one of eight proposals that technology providers submitted to the FTA.

Bombardier has spent several years developing the RFID-based TrackSafe system, in order to protect rail workers on tracks, whether outdoors or in tunnels. The TrackSafe solution is designed to provide rail workers with advance warning (by means of flashing lights and audible horns) of an approaching train, and to similarly warn train operators if they are about to enter an area in which personnel are present. This is accomplished via passive high-frequency (HF) RFID tags embedded in wristbands worn by employees, readers installed along the tracks and motion sensors to detect oncoming trains. 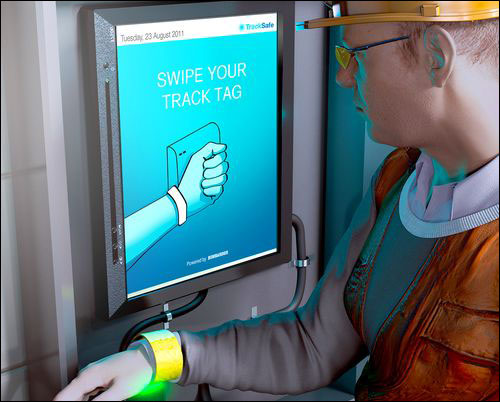 The TrackSafe system displays a green light to indicate that a worker's wristband tag has been read.

Tony Sutton, Bombardier Transportation's general manager of material solutions in North America, and Pankaj Sood, the founder of the McMaster RFID Applications Lab (MRAL)—which developed the system for Bombardier—described the solution at RFID Journal LIVE! 2012, held earlier this month in Orlando, Fla. MRAL has worked closely with Bombardier to develop this system, while the Ontario Centres of Excellence (a government program developed to help link industry with academic research) provided $600,000 in funding.

According to FTA statistics cited by Bombardier, 53 percent of rail transit worker fatalities reported between 2003 and 2008 occurred along a railroad's right-of-way. The firm has worked closely with its customers (rail operators) to determine the type of signaling that would help its staff—train operators, as well as employees on the tracks that might be in harm's way.

Initially, MRAL and Bombardier examined the risks facing track workers, and considered how technology could help to reduce those threats. According to Sood, many of the dangers result from human error, a failure to follow rules or the fact that rules do not always completely eliminate hazards. Curved tracks, bad lighting and tunnels can be the most problematic, he says.

What the group has developed and tested during the past two years is TrackSafe, whereby each worker wears a wristband containing an RFID tag complying with the ISO 14443 standard, though Sood says the system could utilize other types of tags as well. Before entering the tracks, a rail worker can proceed to an RFID reader station, which comes with a touch screen, as well as built-in RFID reader and antennas. The employee can place his or her wrist within a few inches of the interrogator, which will then read the unique ID number encoded to the tag of that individual's wristband.

Once the tag is read, that data is transmitted via a cabled connection to a server running the TrackSafe software, which links the tag ID to information regarding the worker, and then displays that person's name onscreen. The employee can then press prompts on the touch screen to confirm his or her identity, and to indicate where on the track he or she will be working, and for what purpose. That data is stored in the TrackSafe software, which provides real-time information indicating which personnel are on the tracks at any given time, and at which particular location, along with historical data. Thus, a transit operator can view the times and dates on which workers were located at specific sections of the tracks.

Along the tracks, the TrackSafe system consists of reader stations installed every 500 feet, each equipped with an audible horn and two warning lights—one positioned so that it can be to visible to train operators, and the other to get the attention of personnel on the track. While walking down the track, workers pass the readers. At each one, they place their TrackSafe wristband near the interrogator, which illuminates the blue light until it reads a tag, at which time the system temporarily displays a green indicator light, indicating that a tag has been read.

Motion sensors are placed along tracks on which workers are present. When a sensor detects that a train has entered such a zone, it forwards the information to the TrackSafe software, which prompts the flashing of the two warning lights mounted above the readers—one mounted higher than the other in order to catch the train operator's attention (the lower light is designed to warn track workers).

In the event that a train operator sees an unblinking warning light, he or she now knows that the train is within 1,000 feet of workers on the track. A flashing lights means the train is within 500 feet. An audible alert is sounded simultaneously, warning nearby personnel.

"Building the business case requires a lot of end-user discussion," Sutton says. "This is not a cheap thing to deploy. You need to wire tunnels, and they must be maintained." However, he says, the solution not only offers a reduction in risk for workers, but also improves processes. For example, without the system, flags or lights are sometimes temporarily installed within an area. In such a scenario, employees must walk along tracks, placing and later retrieving these flags or lights, which would be unnecessary with the RFID solution. What's more, insurance premiums could be lower with the safety system in place.

To test the TrackSafe system, Bombardier and MRAL employed several methods, including the installation of RFID readers along a piece of track that Bombardier has devoted to laboratory testing (see 'Sketch' the User Experience to Ensure an RFID Project's Success). Upon the tests' conclusion, Sood says, the researchers studied the results. "Did we actually reduce the likelihood of an incident happening? We had to deploy tools to quantify risk, and then figure out that reduction of risk," he reports. "The team took a theoretical approach, determining what risks were present in what circumstances, and in what way technology could reduce that risk. We took track-worker incidents, did interviews, simulations."