At Many Trade Shows, Use of NFC-enabled Phones Is Touch ‘N Go

Dec 06, 2010The availability of mobile phones supporting Near Field Communication (NFC) RFID technology could change the way conference attendees and exhibitors conduct business, thereby enabling attendees to use NFC applications to share contact details, download product information at booths, send pictures and pay for snacks and meals, all from their cell phone. ITN International, however, is already a part of that future, as a provider of NFC wireless conference-management systems that have been employed at numerous events throughout North America, Europe and Asia since 2005. The solution features NFC-enabled mobile phones that the firm rents to exhibitors, while conference attendees wear NFC-enabled badges (provided by ITN) to share information about themselves with exhibitors, or to initiate other functions.

Attendees can tap their BCard badge against the ITNPod’s embedded NFC-enabled phones, earning the chance to win prizes.

Prior to 1995, ITN International offered a solution involving a smart contact card that needed to be inserted into a reader in order to be interrogated. Exhibitors at booths, as well as event workers managing traffic into and out of the show floors and work session rooms, carried the readers to capture attendees' ID numbers, says Ivan Lazarev, ITN's president. In 2005, the firm expanded its offering with the addition of its contactless Touch 'N Go system, which features attendee ID badges containing NFC tags from NXP Semiconductors' 1-kilobyte Mifare RFID chips, Wireless Dynamics (WDI) 1010 NFC RFID readers plugged into the SD slots of Microsoft Windows-based mobile phones, and the BCard software application. In 2008, the company added Nokia 6212 NFC-enabled handsets, which it rents—along with the NFC-enabled Windows-based mobile phones—to conference organizers and exhibitors, for the purpose of reading badges. The phones do not operate as a voice phone, but a SIM card within each phone allows the transfer of information—for example, transmitting read data from the phone to ITN's back-end server.

Upon arriving at the conference, an attendee first picks up his plastic, credit-card-size BCard ID badge, which is printed and encoded by event employees with data regarding that individual, such as his phone number and e-mail address, the company he represents and the sessions to which he has access, as well as prepayment permission for those using the e-purse function. The badge can also be printed, and its embedded RFID inlay encoded on site, using an Evolis encoder and printer plugged into a computer with a USB connection. When an individual registers prior to attending the event, he receives a confirmation with a bar-coded number that can also be used at a registration station or kiosk provided by ITN. In this case, the bar-coded number could be presented to a bar-code scanner, and the BCard badge would be automatically printed and encoded, and then presented to the attendee.

When an attendee enters the show floor, workers utilize Nokia mobile phones to read the ID number encoded to the RFID tag embedded in that person's BCard badge, which links to data stored in the ITN-hosted server, to assure that person is authorized to access the floor. That information is stored in order to indicate who has entered the floor, and when. The attendee can then present his BCard badge to any booth that he chooses, and the exhibitor at that booth can tap the Nokia phone against the badge to capture all of the data on the badge's tag. The phone then transmits that information to the ITN back-end server, where it can be later accessed by the booth representative. The phone's NFC reader can also encode the badge with such details as whether that individual has picked up a gift package—for example, a promotional gift being offered by an exhibitor to every attendee—thereby ensuring he does not return and pick up another one.


If an exhibitor needs to print information that she has accumulated via the mobile phone's RFID reader, she can use the phone's Bluetooth pairing function (provided as part of the system). Previously stored on the phone is the pairing data, which includes the serial number of a printer intended for printing information from that phone. She can then take her phone to a Bluetooth printer, provided by ITN, located at her own booth. Attached to the printer is an NFC tag with a Mifare chip encoded with specific data about that device, including its serial number. When the mobile phone is tapped near the printer, the phone's NFC reader captures the details of that printer, including the pairing specifications, and she can then simply press a prompt to print either information or pictures stored on her phone.

At a meeting or break-out session, staff members at the door to the room in which that activity is being held can utilize an NFC-enabled mobile phone to read each attendee's ID, thereby capturing and storing information indicating who attended the session, while also encoding data to the individual's badge, recording that he had entered the session. Upon leaving, the individual again has his tag read, and the length of time he spent attending the session is thus saved on his badge. If he has remained in the room for a predetermined amount of time, he may qualify, for instance, for a continuing education credit from his employer. For the event organizers, the system provides a record of the number of individuals attending each session, as well as their identities. "Then," Lazarev says, "they have a very accurate picture of what is going on at the event." In fact, management could see, in real time, which visitors are at which particular sessions. What's more, he says, the organizers can then use that data to send surveys about the session to those who attended. 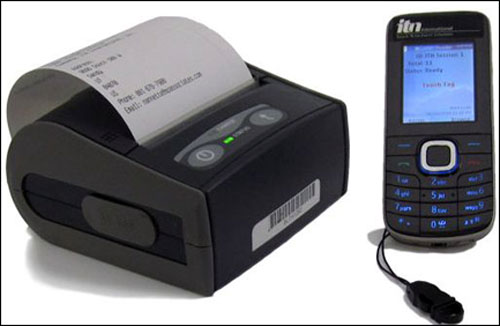 To print information accumulated via the phone's RFID reader, an exhibitor can send a command via Bluetooth to an ITN-provided printer.

The BCard badge also has a purse functionality enabling it to store a prepaid balance, thereby allowing attendees to purchase food or beverages from food vendors, who can use one of ITN's RFID-enabled phones to read the purchaser's badge and deduct the cost from the prepaid balance stored on its RFID inlay.

The system will soon be available on Apple iPhones fitted with iCarte NFC readers, Nokia C7 touch-screen phones with integrated NFC functionality, and other NFC-enabled devices that run on the Android and Java platforms. "2011 is promising to be a very exciting year for NFC," Lazarev states, "and ITN is uniquely positioned to take advantage of the increased use of NFC handsets by business professionals."


ITN provided BCard badges embedded with dual NFC and Alien Technology Squiggle ultrahigh-frequency (UHF) Gen 2 RFID tags at the EMC World conference, held in Boston in May 2010. The company installed Alien interrogators to read those tags, which were used in cases in which event managers wanted to have a record of the number of attendees passing through areas in which reading each badge with an NFC reader would have been unrealistic (such as in a very crowded location). With the UHF solution, the managers can store data indicating which visitors came and went from the show, the number of times they did so, and the number of individuals who might have filled a specific area, thereby providing data to assist with future traffic-flow planning.

ITN International has also recently begun offering what it calls the ITNPod—an adjustable-height column, standing at least three feet tall, with four affixed NFC phones. An ITNPod can be placed at exhibit-hall entrances, or in less-frequented locations on a show floor, for the purpose of capturing data regarding attendees' movements. Individuals who tap their badge against one of the phones on the ITNPod can accrue opportunities to win prizes, allowing managers to maintain a record of the number of visitors entering and exiting a site, while also attracting more traffic to specific areas.

The company reports that it has seen its business increase by 20 percent annually over the past two years, and that it has serviced more than 500 events to date with the BCard NFC-based solution. ITN can distribute as many as 3,000 phones (1,800 from Nokia, the remainder constituting a variety of Windows mobile devices), each equipped with an NFC reader. The solution was deployed in September 2010, at the IBC 2010 conference in Amsterdam, and in October, at the CTIA Enterprise & Applications trade show in San Francisco.

Over the next few years, conference-goers will be able to forego using NFC-enabled badges, and will simply bring in their own NFC-enabled mobile phones to do everything from providing access control and registering to exchanging business cards and accruing education points. In this scenario, the phone would serve both as an NFC reader and as a tag. Data such as session access and contact information, for example, could be stored on the mobile phone itself, and attendees could share that data with others by tapping their phone against another person's phone, or they could tap their phone to capture information from another phone or smart poster. (A smart poster has an RFID tag that attendees could tap with their NFC phone in order to obtain additional information about whatever is being described on it—for example, see NFC Research Lab Rolls Out Smart Posters.)