Retailers, hospitals and other companies are testing the firm's Senseon Secure Access system to restrict cabinet access to authorized parties.

Sep 21, 2016Accuride International has released an RFID-enabled access-control solution to allow its customers to protect the contents of cabinets and drawers without the need for keys. The Senseon Secure Access system consists of low-frequency (LF) 125 kHz readers connected to electronic locks integrated with the drawers' sliding hardware, so that the solution remains invisible to users. Individuals can tap a badge or fob containing an embedded LF RFID tag in order to open a locked cabinet or drawer.

Accuride is a 50-year-old manufacturer of slides—hardware commonly used to affix a drawer to a cabinet, and consisting of rails on which the drawer rides. Slides can also be utilized in pullout shelving and drawers for desks and other furniture, as well as in appliances (such as refrigerators) and motor vehicles. During the past few years, Accuride has been investigating the use of access-control technology to provide security for cabinets. The company designed a patented locking system that could be built into the slides, and be used to prevent unauthorized individuals from accessing a drawer or cabinet. However, notes Greg Rewers, Accuride's solutions marketing director, traditional access control in furniture requires keys, and managing those keys and who is using them can still pose a challenge. In additional, keyholes can mar the aesthetics of some furniture. 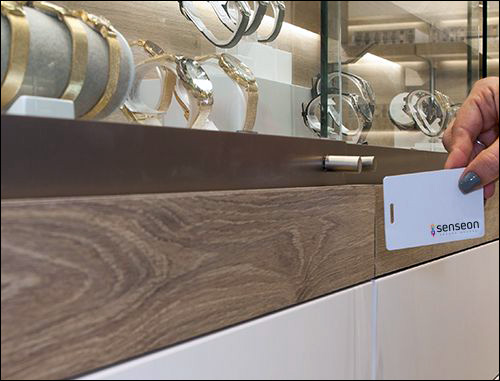 To unlock a cabinet, a user places a Senseon RFID card in the vicinity of that cabinet's reader.

Therefore, Accuride devised an electronic system that would allow users to control who had access to locked drawers, and to make that access available via RFID badges or fobs rather than keys.

The RFID reader, which measures 3.8 inches by 1.8 inches by 0.77 inch (96 millimeters by 45 millimeters by 20 millimeters), can be installed directly inside a cabinet, or can be attached to its exterior (for example, in situations when a drawer is made of metal). To manage the electronic lock, a user initially taps an "administrator card" against the reader. If the reader's built-in controller recognizes the card's ID number, the user can then authorize other cards or remove them from the system, based on the number of times he or she taps the administrator card. For instance, a single tap equates to adding cards to the system, while three taps indicates that the following card should be removed. The reader is powered by a DC converter that plugs into an AC outlet.

An Accuride side-mount slide with an integrated electronic lock

The cabinet's controller stores the authorized RFID tag numbers after they have been entered. When the appropriate tag is used, the controller simply releases the locking mechanism to which it is connected, allowing any affected doors or drawers to be opened. The system is flexible in its design, Rewers says, and can control up to 15 connected locks.

Several cabinet companies have begun ordering the Senseon technology, Rewers reports, and are building it into the furniture they make for customers. Some of those customers, he adds, are already using the technology in a variety of commercial and residential environments.

Those currently testing the Senseon system include companies in the health-care, retail and residential markets, and the technology is also being tested in kitchens on railcars. Rewers describes a few common use cases, noting that in the health-care market, for example, locking drawers are used to prevent unauthorized parties from accessing narcotics or other medicines. In such a case, health-care workers with the badges could access the cabinets when they needed to. In retail, the system could be utilized in showcases displaying high-value products, and the cabinet itself would be aesthetically pleasing, without any visible keyholes or handles.

An automotive dealership is employing the technology in cabinets that store new vehicle keys, in order to ensure that they are closely managed, and that only authorized sales managers can access them. In a bank, the technology will be used to secure customer records stored in locked cabinets. 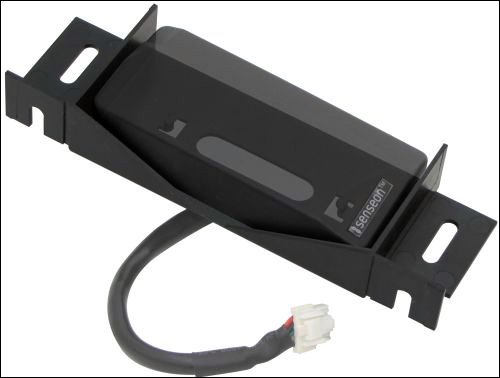 The Senseon RFID reader can be mounted to a cabinet's interior or exterior surface.

The company is currently taking orders, Rewers says, and is working to customize the system for each customer. "They can submit drawings to us," he adds, that can then be used to formulate the best solution for a particular piece of furniture. The readers are manufactured by Accuride, which obtains the badges and fobs from third-party suppliers.

"The system is designed to be easy to install, easy to program and easy to use," Rewers states. The reader and locking mechanism have been tested for up to 50,000 locking cycles, so the RFID-enabled locking device is expected to have the same lifespan as the furniture.

The RFID-enabled access-control system can be used with integrated under-mount and side-mount slides, and can be ordered with several built-in functionalities: electronic touch release (which opens a cabinet or drawer at the touch of a hand), soft close (which shuts without being manually pushed closed), auto open (which opens instantly when an RFID badge is read) and standard operation (in which a user would need to pull the drawer or cabinet door open).