2011 RFID Journal Award Winner: Best Use of RFID to Enhance a Product or Service—RFID Delivers a Royal Payback

Jun 01, 2011One of Royal Caribbean International cruise line's most popular—and profitable—food and beverage offerings is a soft drink refill package. For a flat fee, passengers on its 22 ships who are lounging by the pool can have as many cups of Coca-Cola and other sodas as they like, without having to handle money. But guests complained they had to stand in line and wait for a bartender to pour the prepaid drinks.

Three years ago, ValidFill, a Sarasota, Fla.-based manufacturer that provides the cruise line's refill mugs, told Royal Caribbean it had a potential solution: a self-service drink dispenser that would use radio frequency identification to control access to the soda. Special plastic cups with RFID tags embedded in the bottom would activate the drink dispenser, allowing qualified guests to help themselves and eliminating long waits at the bar.

Although Royal Caribbean was not using RFID elsewhere in its operations, the idea sounded promising to Bob Midyette, the company's director of fleet beverage operations. "We did not know how to accomplish the self-service objective," he says. "When RFID and its capabilities were presented to us as an early, trailblazing option, we thought it was perfect, although not perfected." (Royal Caribbean has since launched a real-time location system that uses Apple iPhones and Wi-Fi-based RFID tags in wristbands or badges to let guests find members of their party on board a ship.)

ValidFill had a prototype of the RFID-enabled drink dispenser, but no experience designing equipment for marine environments or navigating the regulatory thicket facing the cruise line, which is based in Miami and regulated by the U.S. Centers for Disease Control (CDC). Still, with a potential solution in hand, the two companies decided to move forward: ValidFill would fund development of the system, and Royal Caribbean would provide the regulatory and environmental expertise, as well as a ship where they could test the equipment.

The design of the drink-dispensing system had to meet a number of unique requirements. To withstand exposure to the elements, for instance, the dispensers—which are located on the open pool decks and exposed to salt air, high seas and nightly power washing—had to be constructed of a higher-grade stainless steel than typical machines. In addition, all the materials and components—right down to the types of screws—used in the drink dispensers were subject to strict CDC rules.


To get the project started, the cruise line brought together a cross-functional team with members from food and beverage operations, facilities, information technology, health and safety, marketing and finance, as well as Coca-Cola, ValidFill and other outside partners. As a first step, ValidFill tested an RFID-enabled drink dispenser in a Florida high- school cafeteria, proving the concept could work. But building a dispenser that would function with 100 percent reliability on a cruise ship involved months of custom design and testing.

"We had multiple challenges developing this solution," says Jeremy Wade, product development and operations manager at ValidFill, which has created RFID-enabled soft drink dispensers for amusement parks, schools and sports stadiums. "Our biggest challenge was to find a tag that would work well with liquids, but only function within a few inches of the designated antenna," to avoid interference from other tags. The machine accommodates up to four cups at once, placed within inches of each other.

During the design process, all components were reviewed by the CDC's U.S. Public Health Service, which provided guidance on meeting sanitation standards. As a result of that input, the antennas had to be significantly redesigned. ValidFill produces the antennas, which are sealed inside the soda dispenser's drip tray. Alien Technology's ALR 9900+ RFID readers are housed in waterproof cabinets that sit below the dispensers. Alien's Gen 2, passive ultrahigh-frequency small-item tags are embedded in the bottom of the plastic cups.

After 11 months of designing and engineering, the system was ready for its trial run aboard the Majesty of the Seas, a 2,767-passenger vessel that sails from the Port of Miami. First, the crew was trained on how to use, explain and sell the refill packages, as well as basic care and maintenance of the machines. "The employees went bonkers," Midyette says. "They thought it was the best thing because of the convenience factor."

Then, the new refill package was introduced to guests on a three-day cruise. On the day the ship set sail, the cruise line placed a pyramid of cups on a table and a sales register next to the drink dispenser. Once guests saw how the system worked, they were eager to try it, Midyette says.


When guests buy a refill package, which costs approximately $6 per day, they get an RFID-enabled souvenir cup. ValidFill programs the cups' RFID tags to include information, such as how much liquid to pour and an expiration date, which deactivates the tag once the cruise ends. Each drink dispenser's software houses the calendar for the ship's itinerary, so the first time the cup is placed on the machine, the tag is activated for that sailing only. The dispensers, which are welded to the ship's deck for stability and look like standard soda fountains, are available to guests around the clock.

To get a drink, guests place their cups on the machine's drain tray under the type of soda they want and press a button. The interrogator reads the tag, and if a valid tag read is registered, the dispenser releases the authorized amount of soda (up to 20 ounces for the refill package cups) and then turns off automatically, preventing unauthorized users from filling up. The machines have a screen that displays simple graphic prompts, to guide customers. 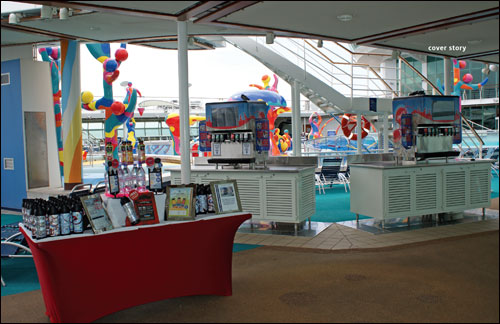 The RFID-enabled drink dispensers, located on the open pool decks, had to be designed for marine environments and meet strict U.S. Centers for Disease Control requirements.

Data from the RFID tag—including a unique identification number, time of transaction, and type and quantity of soda dispensed—is captured and avail able to the cruise line through a Web interface. The information is used to track sales of the refill package, the amount of soda syrup consumed and usage patterns among guests. It is not linked to any other information about the guests, or to the ship's point-of-sale or inventory systems.

The ship's crew is charged with cleaning and refilling the soda dispensers, but ValidFill supports the RFID technology over the Internet, Midyette says. ValidFill has the unique IP address of each machine and can monitor and troubleshoot remotely from a Web browser.


Guests aboard the Majesty of the Seas flocked to the new refill package, drawn to the convenience and ease of use, and that drove sales up, Midyette says. "We were able to dramatically improve the profitability of our existing offering through explosive growth," he says. The sales of the refill package jumped 107 percent on the initial test ship, which represented an increase of more than $435,000 in profit in soda fountain sales. Payback was speedy—the company achieved a return on its initial investment in less than 30 days, he says.

In addition to the bump in sales, Royal Caribbean was able to transform the source of a common customer complaint into a popular amenity. And while the machines fill thousands of cups on each cruise, they free up bartenders to service other customers. 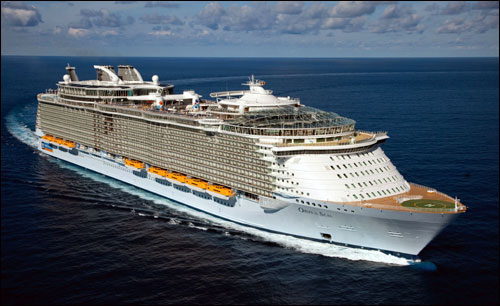 The number of drink dispensers installed on each ship will vary, depending on vessel size. Sales growth of the soda refill package will also vary, based on market demographics.

Based on the strong results from the system's deployment on the Majesty of the Seas, Royal Caribbean decided to roll out the drink dispensers to its entire fleet of 22 ships, a process the company plans to complete this year. The number of drink dispensers installed on each ship will vary, depending on vessel size. Once that work is completed, the project will be evaluated and Royal Caribbean will decide if it makes sense to expand the self-service drink dispensers to other parts of the ships, such as buffet areas and restaurants.

Dramatic growth in sales of the soda refill package is not expected on every ship, because demand for soda varies with market demographics, Midyette says. Still, Royal Caribbean considers the introduction of the self-service drink system an unqualified success. "We will literally drive millions of dollars of incremental profit to our bottom line," he says, "making it one of the most exciting profit initiatives."

To learn about this year's other winners, see 2011 RFID Journal Awards: Excellence in RFID.