Here's a plain-English explanation of what radio frequency identification is and why it's suddenly become an important technology.

Jan 16, 2005Radio frequency identification (RFID) is a generic term that is used to describe a system that transmits the identity (in the form of a unique serial number) of an object or person wirelessly, using radio waves. It's grouped under the broad category of automatic identification technologies.

Some auto-ID technologies, such as bar code systems, often require a person to manually scan a label or tag to capture the data. RFID is designed to enable readers to capture data on tags and transmit it to a computer system—without needing a person to be involved.

Antennas read passive tags on cases stacked on a pallet

A typical RFID tag consists of a microchip attached to a radio antenna mounted on a substrate. (For more detail and for information about tags that don’t use silicon chips, read “The Basics of RFID Technology.”) The chip can store as much as 2 kilobytes of data. For example, information about a product or shipment—date of manufacture, destination and sell-by date—can be written to a tag.

To retrieve the data stored on an RFID tag, you need a reader. A typical reader is a device that has one or more antennas that emit radio waves and receive signals back from the tag. The reader then passes the information in digital form to a computer system.

Until recently, the cost of RFID has limited its use. For many applications, such as tracking parts for just-in-time manufacturing, companies could justify the cost of tags—a dollar or more per tag—by the savings an RFID system could generate. And when RFID was used to track assets or reusable containers within a company’s own four walls, the tags could be reused.

But for tracking goods in open supply chains, where RFID tags are put on cases and pallets of products by one company and read by another, cost has been a major obstacle to adoption. Tags must, in effect, be disposable because the company putting them on cannot recycle them. They get thrown out with the box. (Tags built into pallets could be reused, and some companies are looking to develop ways to recycle tags on corrugated cases.)


In 1999, the Uniform Code Council and EAN International teamed with Gillette and Procter & Gamble to fund the Auto-ID Center at the Massachusetts Institute of Technology. The center changed the equation by working with private industry to develop an RFID tag that would be very low cost (the goal was five cents) when manufactured in high volumes. That way, companies could put tags on everything they own and then connect them to the Internet through a secure network. The center eventual gained the backing of the U.S. Department of Defense and some 100 global companies, including Kimberly-Clark, Metro, Target, Tesco, Unilever, Wal-Mart. These companies were attracted to RFID because it held out the potential of offering perfect supply chain visibility—the ability to know the precise location of any product anywhere in the supply chain at any time.

The 5-cent tag is still several years away. Today tags cost from 20 to 40 cents, depending on their features and packaging. (For more on this, see RFID Costs and Components). The Auto-ID Center's contribution went beyond trying to create an inexpensive tag. It developed the Electronic Product Code (EPC), a numbering scheme that makes it possible to put a unique serial number on every item manufactured. It developed a way for tags and readers to communicate (the air interface protocol) and designed a network infrastructure that stores information in a secure Internet database. A virtually unlimited amount of data associated with a tag’s serial number can be stored online, and anyone with access privileges can retrieve it.


The Auto-ID Center handed off its technology to a non-profit organization called EPCglobal, which has created a second-generation air interface protocol and is developing the network infrastructure —now called the EPCglobal Network—to enable companies to share data in real time. Here's how it will work. When Company A ships a pallet full of soft drink, the tags on the cases and pallet are scanned as the shipment leaves, and software is used to automatically let Company B know the shipment has left the warehouse. Company B can look up data associated with the serial numbers on the shipment and learn what's coming, when it will arrive and so on. When Company B receives the shipment, it scans the tags automatically, and a message can be immediately sent to Company A to let it know the shipment arrived.

The potential efficiencies created by this visibility are enormous. Companies would be able to reduce inventories while ensuring product is always in the right place at the right time. And because no humans would have to scan the tags, labor costs and errors would also be greatly reduced. 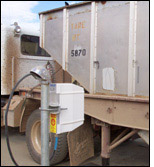 It's not clear if this vision can ever be fully achieved. The biggest obstacle is the cost of the tags. The Auto-ID Center did research suggesting the price of tags could fall to 5 cents when 30 billion tags are consumed annually. But 30 billion tags will never be consumed if the tags cost 25 cents or more. So the industry faces a chicken-and-egg problem—tags won't get cheap until a lot of people use them, but a lot of people won't use them until they get cheap.

Wal-Mart was the first retailer to require suppliers to put tags on cases and pallets of goods. In June 2003, it told its top 100 suppliers that they would need to begin putting tags on shipments in January 2005. One reason Wal-Mart chose this approach was to solve the chicken-and-egg problem. If the giant retailer's top suppliers began buying tags, that would begin to drive the price down. Lower prices would enable more companies to use the technology. Then volumes would increase and prices would fall further.

Why RFID Is Hot


Wal-Mart's push to use RFID in the open supply chain is a big reason why the technology is hot today. But it's not the only reason. Several important factors have come together around the same time. One is the advances in ultra-high frequency RFID systems. UHF systems are able to deliver the read range needed for supply chain applications, such as scanning tags on products as pallets are moved through a dock door or scanning cases on a high shelf in a warehouse.

Another factor was the efforts by the Auto-ID Center to develop a system that is low cost and based on open standards. These are prerequisites for the use of RFID in open supply chains, where a company puts a tag on a product, and it's read by other companies in the supply chain.

And finally the ubiquity of the Internet is an important (and often overlooked factor). The Auto-ID Center realized that the Internet could be used to enable companies to share information about the location of products within the supply chain. Before the Auto-ID Center proposed the EPCglobal Network, there was no way (other than manually phoning, faxing or e-mailing) for Company A to let Company B know that it has shipped something, and there was no way for Company B to let Company A know that the product has arrived.

With the network, companies can not only identify products in the supply chain, they can share information about the location of goods. Company A, for instance, could let Company B see—in real time—what is in Company A's warehouse. Or Company A could let Company B know automatically that goods were scanned leaving the warehouse and will arrive at Company B's facility the next day. It is this ability to share information about the location of products anywhere in the supply chain that makes RFID a potentially powerful technology.