The car manufacturer is tracking which components are installed in its prototype vehicles, and is monitoring the cars' locations to reduce their chances of being seen by unauthorized parties.

Feb 11, 2015German high-performance car manufacturer Porsche has launched a radio frequency identification solution to better manage the development and movement of its prototypes as the new vehicles and their components are tested in the lab and on the road prior to being released to the market. The RFID system, provided by noFilis, enables the car maker to identify and confirm exactly which components are installed in its prototypes during each of numerous tests, while also tracking the locations and testing of its engines, as well as the parking and movements of the prototype cars onto and off the lot, at the company's development center. What's more, the firm is using a sensor-based system to track the newly engineered vehicles anywhere they go, in order to better manage the prototypes.

"Porsche needed innovative software solutions in order to improve production and application-management processes," says Thomas Grabscheit, an RFID specialist and senior project manager at MHP, a Porsche subsidiary that provides process and IT consulting services to the automotive and manufacturing sectors. 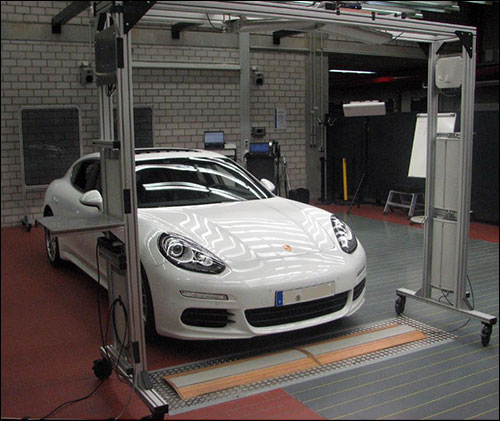 When testing is completed, a prototype vehicle is driven through a portal consisting of Kathrein RFID readers and antennas, to identify the vehicle's components by means of RFID tags.

Porsche's engineers work on its future cars at the company's development center in Weissach, Germany. There, once a prototype has been built using components made specific for that new car, the vehicle proceeds through a series of tests to ensure that it meets the company's requirements for speed, performance and other functionality. Some tests are conducted within a laboratory setting, while others require a driver to drive the prototype on roads, either inside or outside the facility.

The development and testing of any new car is a highly complex process, nowhere more so, Grabscheit says, than at the Porsche facility, where new cars are expected to provide the latest and best performance in what the company refers to as "the premium segment" of the automobile market. Each new car, he explains, is tested with multiple combinations of hundreds of components made by Porsche and third-party providers, according to engineers' specifications. During each test, components are installed in the vehicle, its performance is measured, and the parts are then swapped out for others, all in an effort to gain the best-performing product. Tracking which components are in the car for each test requires the writing of serial numbers and other details on paper or manually entering them into a database along with test results. Sometimes, if testing personnel are unsure which components are in the car, they may need to dismantle parts of the vehicle following a test in order to view the ID number written on each component.

Porsche approached noFilis seeking an automated system to accomplish the tracking of components via this testing process, with no potential for error, after noFilis built a similar solution for Porsche's parent company, Volkswagen, according to Patrick Hartmann, noFilis' global sales director. The system, known as "Gläserner Prototyp" (the German words for Transparent Prototype), consists of EPC ultrahigh-frequency (UHF) RFID tags on as many as 200 components, each with a unique ID linked to details about that part. The tagged items are installed in the car, and once testing is completed, the vehicle is driven through an RFID reader portal to identify all of its components. The portal is made with a Kathrein RRU4-ELC-E6 readers and Wide Range antennas, and noFilis' CrossTalk Agent software, residing on the reader, captures the tag data and forwards it to CrossTalk software running on Porsche's back-end server. With CrossTalk Agent operating on the reader, Hartmann says, the system continues to operate even if the local area network (LAN) becomes temporarily unavailable.

The company can also use a Nordic ID Merlin Cross Dipole handheld reader to confirm the tag IDs, in case not all were interrogated by the fixed reader.

Due to the wide variety of tagged components—such as intake pipes, air filters, airbags and catalytic converters—and their various form factors, the company employed multiple makes and models of RFID tags. Those included tags from Confidex and Smartrac.

The system is also being used to track the prototypes themselves. When a prototype car leaves the facility, it is critical that the company verify the vehicle's removal is authorized, and to know how long it is gone. In this way, Porsche hopes to reduce the chances that others outside the firm would be able to view the prototype. The company had required drivers go through a process of filling out paperwork and speaking with employees at the gate in order to obtain permission to leave the facility and drive on public roads, but with the noFilis RFID solution, the system is now automated. Each vehicle has a tag containing a unique ID number on its windshield. As the car approaches the gate, a Kathrein reader installed at that location captures the tag's ID number. The CrossTalk software, residing on Porsche's back-end server, forwards that data to the car company's own management software. If the vehicle is authorized to leave, CrossTalk stores the time of departure. When the vehicle returns, the same process takes place, thereby permitting the driver to re-enter the facility, while creating a record of how long the car remained outside the premises.

Security is necessary not only outside the facility, but also within its internal, open driving area. Therefore, the company needs to know when vehicles leave covered parking areas and are outside in the yard or on test drives. A Kathrein reader mounted at each parking area's entrance and exit captures the prototype's windshield tag ID, and CrossTalk stores data indicating how long the vehicle remains outside the covered area.

Engines must also be carefully guarded as they are put through the testing process, and Porsche has, therefore, been using RFID in an area known as the Test Bench. The car maker installed RFID tags in the pallets on which prototype engines are mounted, and also installed a Kathrein reader beneath each of its 20 test bench stations. In addition, the firm attaches a variety of tags to components installed in the engines. Tagging catalytic converters poses a special challenge, Grabscheit adds, due to the extreme high temperatures they can reach. To address that problem, the company places a small metal shield between the tag and the converter itself, in order to protect the tag from the heat.

The station then puts the engine through a series of tests, the results of which are stored in the company's software. The CrossTalk software links the pallet's tag ID and the multiple tagged components to a specific engine prototype, and when the station reader interrogates the tag IDs, it links them with the testing underway. Moreover, the tagged pallets ensure that workers know a specific engine's exact location at any given time, such as in the warehouse before being tested.

The next phase of the prototype management system rollout will involve the use of a variety of sensors to link a prototype's performance with that vehicle's ID and location. In this case, the system will integrate an onboard unit that includes GPS and GPRS technologies. The unit captures sensor information, such as engine temperature, ignition or window status, tire pressure or the vehicle's speed, and forwards that information, along with the GPS-based location data, to the CrossTalk software via the GPRS network.