The History of RFID Technology

Radio frequency identification has been around for decades. Learn how it evolved from its roots in World War II radar systems to today's hottest supply chain technology.

It’s generally said that the roots of radio frequency identification technology can be traced back to World War II. The Germans, Japanese, Americans and British were all using radar—which had been discovered in 1935 by Scottish physicist Sir Robert Alexander Watson-Watt—to warn of approaching planes while they were still miles away. The problem was there was no way to identify which planes belonged to the enemy and which were a country’s own pilots returning from a mission.

The Germans discovered that if pilots rolled their planes as they returned to base, it would change the radio signal reflected back. This crude method alerted the radar crew on the ground that these were German planes and not Allied aircraft (this is, essentially, the first passive RFID system).

Under Watson-Watt, who headed a secret project, the British developed the first active identify friend or foe (IFF) system. They put a transmitter on each British plane. When it received signals from radar stations on the ground, it began broadcasting a signal back that identified the aircraft as friendly. RFID works on this same basic concept. A signal is sent to a transponder, which wakes up and either reflects back a signal (passive system) or broadcasts a signal (active system). 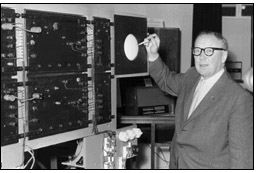 Watson-Watt with the first radar apparatus

Advances in radar and RF communications systems continued through the 1950s and 1960s. Scientists and academics in the United States, Europe and Japan did research and presented papers explaining how RF energy could be used to identify objects remotely. Companies began commercializing anti-theft systems that used radio waves to determine whether an item had been paid for or not. Electronic article surveillance tags, which are still used in packaging today, have a 1-bit tag. The bit is either on or off. If someone pays for the item, the bit is turned off, and a person can leave the store. But if the person doesn't pay and tries to walk out of the store, readers at the door detect the tag and sound an alarm.


Mario W. Cardullo claims to have received the first U.S. patent for an active RFID tag with rewritable memory on January 23, 1973. That same year, Charles Walton, a California entrepreneur, received a patent for a passive transponder used to unlock a door without a key. A card with an embedded transponder communicated a signal to a reader near the door. When the reader detected a valid identity number stored within the RFID tag, the reader unlocked the door. Walton licensed the technology to Schlage, a lock maker, and other companies.

The U.S. government was also working on RFID systems. In the 1970s, Los Alamos National Laboratory was asked by the Energy Department to develop a system for tracking nuclear materials. A group of scientists came up with the concept of putting a transponder in a truck and readers at the gates of secure facilities. The gate antenna would wake up the transponder in the truck, which would respond with an ID and potentially other data, such as the driver's ID. This system was commercialized in the mid-1980s when the Los Alamos scientists who worked on the project left to form a company to develop automated toll payment systems. These systems have become widely used on roads, bridges and tunnels around the world.

At the request of the Agricultural Department, Los Alamos also developed a passive RFID tag to track cows. The problem was that cows were being given hormones and medicines when they were ill. But it was hard to make sure each cow got the right dosage and wasn't given two doses accidentally. Los Alamos came up with a passive RFID system that used UHF radio waves. The device drew energy from the reader and simply reflected back a modulated signal to the reader using a technique known as backscatter.

Later, comanies developed a low-frequency (125 kHz) system, featuring smaller transponders. A transponder encapsulated in glass could be injected under the cows skin. This system is still used in cows around the world today. Low-frequency transponders were also put in cards and used to control the access to buildings.


Over time, companies commercialized 125 kHz systems and then moved up the radio spectrum to high frequency (13.56 MHz), which was unregulated and unused in most parts of the world. High frequency offered greater range and faster data transfer rates. Companies, particularly those in Europe, began using it to track reusable containers and other assets. Today, 13.56 MHz RFID systems are used for access control, payment systems (Mobile Speedpass) and contactless smart cards. They’re also used as an anti-theft device in cars. A reader in the steering column reads the passive RFID tag in the plastic housing around the key. If it doesn’t get the ID number it is programmed to look for, the car won't start.

In the early 1990s, IBM engineers developed and patented an ultra-high frequency (UHF) RFID system. UHF offered longer read range (up to 20 feet under good conditions) and faster data transfer. IBM did some early pilots with Wal-Mart, but never commercialized this technology. When it ran into financial trouble in the mid-1990s, IBM sold its patents to Intermec, a bar code systems provider. Intermec RFID systems have been installed in numerous different applications, from warehouse tracking to farming. But the technology was expensive at the time due to the low volume of sales and the lack of open, international standards. 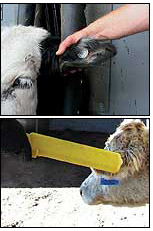 UHF RFID got a boost in 1999, when the Uniform Code Council, EAN International, Procter & Gamble and Gillette put up funding to establish the Auto-ID Center at the Massachusetts Institute of Technology. Two professors there, David Brock and Sanjay Sarma, had been doing some research into the possibility of putting low-cost RFID tags on all products made to track them through the supply chain. Their idea was to put only a serial number on the tag to keep the price down (a simple microchip that stored very little information would be less expensive to produce than a more complex chip with more memory). Data associated with the serial number on the tag would be stored in a database that would be accessible over the Internet.

Sarma and Brock essentially changed the way people thought about RFID in the supply chain. Previously, tags were a mobile database that carried information about the product or container they were on with them as they traveled. Sarma and Brock turned RFID into a networking technology by linking objects to the Internet through the tag. For businesses, this was an important change, because now a manufacturer could automatically let a business partner know when a shipment was leaving the dock at a manufacturing facility or warehouse, and a retailer could automatically let the manufacturer know when the goods arrived.

Between 1999 and 2003, the Auto-ID Center gained the support of more than 100 large end-user companies, plus the U.S. Department of Defense and many key RFID vendors. It opened research labs in Australia, the United Kingdom, Switzerland, Japan and China. It developed two air interface protocols (Class 1 and Class 0), the Electronic Product Code (EPC) numbering scheme, and a network architecture for looking up data associated on an RFID tag on the Internet. The technology was licensed to the Uniform Code Council in 2003, and the Uniform Code Council created EPCglobal, as a joint venture with EAN International, to commercialize EPC technology. The Auto-ID Center closed its doors in October 2003, and its research responsibilities were passed on to Auto-ID Labs.

Some of the biggest retailers in the world—Albertsons, Metro, Target, Tesco, Wal-Mart—and the U.S. Department of Defense have said they plan to use EPC technology to track goods in their supply chain. The pharmaceutical, tire, defense and other industries are also moving to adopt the technology. EPCglobal ratified a second-generation standard in December 2004, paving the way for broad adoption.