Renesas SoC to Bring New Features to the Internet of Things

Consumer products, appliances and healthcare devices may soon be released with IoT functionality based on the company's system-on-chip, which includes a voice activity detector, a graphics processing unit and BLE connectivity.

Sep 06, 2022Consumer device manufacturers have begun deploying a new Internet of Things (IoT)-based system with their products, thanks to the release of Renesas Electronics' latest Bluetooth Low Energy (BLE)-enabled system-on-chip (SoC), which the technology company says is designed to enable fast and easy integration. The SmartBond DA1470x SoC comes with multiple components in a single chip that provides new functionality to IoT solutions, Renesas reports, including an integrated power-management unit, a voice activity detector (VAD) and a graphics processing unit (GPU), plus BLE connectivity.

The result, according to the company, is a seamless way to integrate IoT functionality into devices with sensor and graphical capabilities, as well as audio processing. Renesas says several companies that make smart watches, fitness trackers and other wearables, as well as those that produce electronic bicycles, are testing or adopting the new chip. The system is designed for use in glucose-monitoring readers and other consumer medical and healthcare devices. The SoC works with home appliances that come with displays, as well as with industrial automation and security systems, and it can be used for gaming equipment. 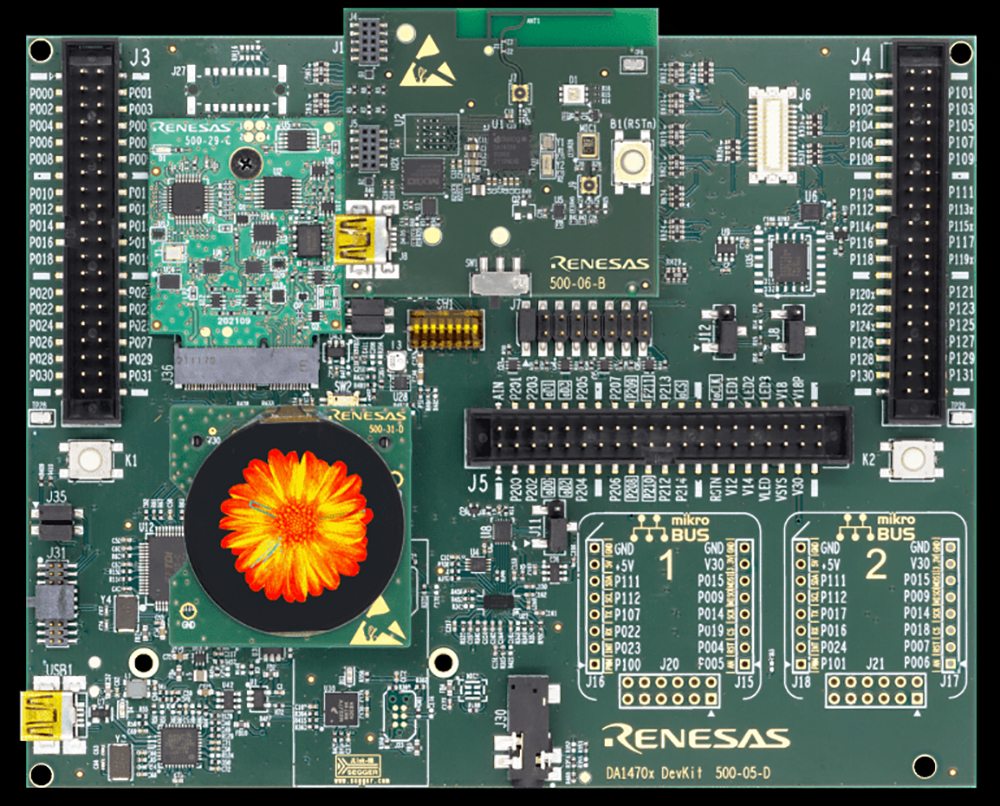 With all of this technology built into a single package, Renesas explains, companies can achieve cost savings in terms of development, while reducing their total cost of goods sold. What's more, building multiple technologies into a single package frees up space within a device for additional components or larger batteries. That, says Rahul Todi, Renesas Electronics' product marketing manager, means greater system reliability.

The SoC, released in June 2022, consists of a multi-core system that includes an Arm Cortex-M33 processor as the main application core, with a Cortex-M0+ as the sensor node controller. It has an integrated 2D GPU and display controller, configurable MAC-supporting BLE 5.2, and proprietary 2.4 GHz radio protocols, along with an integrated USB charger and an ultra-low-power hardware VAD for audio processing.

Traditionally, Renesas offers its SmartBond products in two categories. The DA145xx family caters to simple BLE use cases, with a focus on minimal power consumption and size, as well as a low bill-of-materials cost and power consumption. When the first SmartBond product, the DA14580, was launched, it offered multiple years of battery life for products with coin-cell batteries or other low-capacity batteries or super capacitors. The subsequent DA14531 model continued the low-power trend, Todi says, while offering a low system cost "so that our customers can think of disposable applications like tracking tags, medical injectors" and other products.

The other Renesas product family is the DA146/7xx portfolio, which caters to more advanced BLE use cases with a focus on low-power scalable processing, expandable memory and interfaces, security and power management. These products, according to Todi, were developed to have the highest level of integration and features, enabling low-cost and secure form-factor applications like wearables. Among these, he adds, "The DA1470x is the most recent and advanced product in this category."

Target application areas for the SmartBond family line include sports and fitness (such as smartbands and watches), as well as connected health solutions with IoT functionality built into injectors and devices for monitoring glucose levels and blood pressure. Other applications for which products are using the SoC include the proximity detection of access-control and tracking tags. The products are also built for use in styluses and device keyboards, Todi says, among other applications.

Deploying the SoC for Wearables and More

The more recent SmartBond DA1470x product family is now commercially available, Renesas reports. Early adopters comprise companies that make wearable devices and smart vehicles, such as e-bikes. With regard to wearable activity trackers, the SoC can be integrated into a watch or wristband, thus providing BLE connectivity. It would then provide peripheral functions, such as charging and power management, as well as a processor for multiple sensors.

A smart watch or fitness tracker could use the SoC for LCD control on the device's face, managing over-the-air software updates. With the voice activity detector, it can enable users to speak to their requests without the device requiring a separate VAD module. BLE functionality could enable such a product to be used for wayfinding, by transmitting to BLE beacons installed in a public facility, such as a hospital or train station.

Another use case for the SoC involves the management of an instrument panel for light electric vehicles. For smart vehicles, the SoC offers BLE connectivity, a power-management unit, a graphical processing unit and a sensor block, so additional sensors can be attached and their data can be processed. In that way, companies can build not only e-bikes and e-scooters, but also connected wheelchairs. Other businesses that may deploy the SoC, Renesas reports, include those that make smart-home products, such as connected wireless thermostats, appliances with displays and medical readers.

"The DA1470x is the flagship device in our SmartBond Bluetooth LE product portfolio," Todi states. "It is the first family of devices that has integrated features like voice activity detector and GPU, along with the Bluetooth LE support, which is common with all other devices in the family."

Across all applications, the built-in features enable functionality that previously required separate modules. When it comes to product displays, Todi says, Advanced UI is becoming a key part in many IoT applications, and numerous devices come with small, colorful displays that make user interaction more engaging. At the same time, he notes, such end applications need to be cost-effective. That, Todi explains, was the main drive behind integrating a 2D GPU and display controller in the DA1470x platform.

The VAD offering adds voice-based intelligence to devices. According to Renesas, VAD compares short-term voice energy with background energy. When the VAD detects voice energy above the programmable threshold, it wakes the audio application so it can sample audio data, which can then be processed by the application as needed. This feature enables use cases such as keyword detection at the edge (think "Alexa" or "Hey Google") without compromising battery life. It also works with an analog mic, the company adds, to reduce costs compared to that of digital mic technology.

According to Todi, there are multiple applications for which wearables companies seek to use the new system-on-chip, beyond wristbands and fitness trackers. "We also see this platform being considered for use cases like medical devices, smart homes and AR glasses," he states, along with other applications.