Oct 10, 2014Electroplating company Jing Mei Industrial (JMI) has increased its workflow efficiency and reduced the incidence of errors, as well as creating a record for product historical analysis, thanks to a radio frequency identification system deployed at two of its assembly lines. 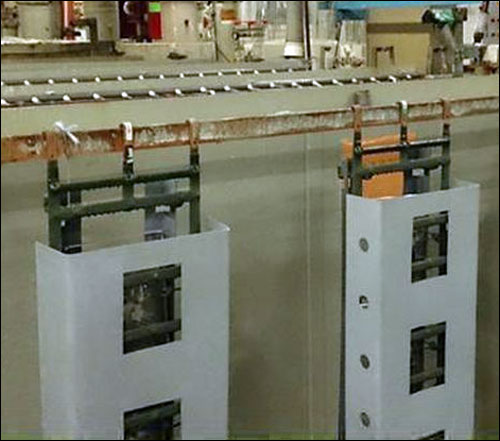 A passive EPC Gen 2 UHF RFID tag is attached to the carrier bar above each carrier rack used to convey products and components down the line.

The electroplating process for each item varies according to the size and material being coated, as each requires specific electric-current and temperature settings and a particular concentration of chemical solutions. Different production lines at Jing Mei's plant are dedicated to different processes, and the parameters of those processes—such as the amount of time spent in preprocessing, plating and post-processing—can also vary, according to the specific plating requirements. Before the system was implemented, workers and supervisors had to closely monitor the plating lines and manually record the items' time spent on each process.

The manual method left many details of what was happening on the production floor unknown, says Parry Chow, the Jing Mei Group of Companies' director of systems management. "In the past," she explains, "we could not know, in real time, how many products had been produced and how many were in the producing stage." This made it difficult to determine if orders were being processed according to schedule. Timely reporting of production output and quality issues were also difficult, Chow notes, because all manual data needed to be re-input into the enterprise resource planning (ERP) system.

The company attached a Confidex Ironside Micro RFID tag to a carrier bar located above each carrier rack used to convey products and components down the line (a total of 400 tags are in use at the two production lines). JMI selected this tag due to its chemical resistance and durability in the presence of extreme temperatures. Since the tag is applied to the carrier bar—and not to the product itself—it can automatically be reused once a new product is attached to that rack.

First, when an item is placed on the carrier rack, its serial number and description are input into the system, via either a PC or a handheld computer. At the same time, a Convergence Systems Ltd. (CSL) CS203 fixed reader with an integrated antenna, mounted above the production line, reads that rack's tag ID number. The tag and item data are then forwarded by the PCCW Solutions software residing on the company's server, via its local area network.

Next, the carrier bar automatically moves the rack to the electrolyte tank, into which the carrier rack and attached item are immersed. After the plating process is completed, the product is removed from the rack and a second CS203 reader, mounted above the production line, reads the tag ID once more, forwarding that data to software that records the time at which the process was finished. The product then proceeds to the quality-control area for inspection before the parts are moved into the warehouse.

With this system in place, management has real-time knowledge of what parts are on the production line, how long they remained on that line (and thus in the electrolyte tank) and when they left. As a result, Chow reports, the technology has eliminated the need to manually input data, which had the potential for causing errors. What's more, she adds, the system makes production output and quality issues more visible to line duty supervisors, as well as to management.

JMI uses the RFID system to provide information regarding any parts that fail the quality-control inspection, so that it can correct production issues in real time before they can grow worse. It also utilizes the data for the purpose of business analytics, to better understand the kinds of conditions that generally lead to improperly plated products, or when errors most often occur.

In the future, the company intends to install the RFID technology at more of its production lines, to report work-in-progress automatically and improve process monitoring at the point of production.