The burger franchise is installing battery-powered wireless sensors in all of its restaurants' coolers, prep rooms and milkshake machines to ensure the proper temperatures of its ingredients.

Apr 12, 2016Handcrafted-hamburger restaurant Five Guys Burgers and Fries is expanding its wireless temperature-sensor monitoring system this year, by installing the technology in its milkshake machines. The restaurant chain also intends to finish deploying the system this year across all of its 1,300 restaurants throughout North America. The ComplianceMate temperature-tracking solution, provided by CM Systems, uses active 900 MHz sensors from Point Six Wireless and helps to ensure that raw ingredients are stored at a safe temperature and are not served if they have exceeded their approved temperature threshold.

Five Guys is a Virginia-based national restaurant chain founded in 1986. As opposed to some fast-food chains, the company does not use frozen meat in its burgers—in fact, it reports, there are no freezers onsite. All food is cooked fresh, and the storage of ingredients within Five Guys' refrigerators must thus be carefully monitored. 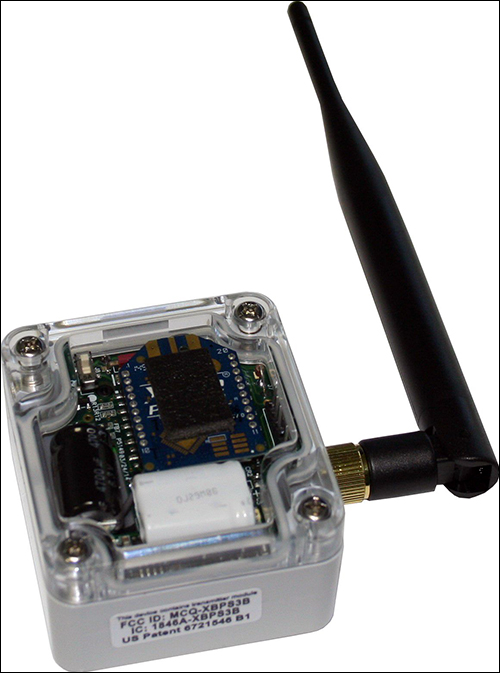 Five Guys is installing Point Six Wireless active 900 MHz wireless sensors at all of its restaurants.

In the past, says Jim Gibson, Five Guys' food safety and quality assurance VP, the company was experiencing problems with some of it coolers. Temperatures sometimes deviated from acceptable levels, but the restaurants' managers were not always aware that this was happening. The company set up a program with a third-party auditing team to visit the restaurants and test temperatures, while employees onsite had to fill out paper logs, manually checking temperature levels every two hours, all day, and writing down the results.

The problem with that system, Gibson says, is that paper documents can be fudged. Individuals could fill in numbers without actually taking the time to check the temperatures. In addition, human error was a concern—in some cases, workers might simply have misread the numbers on thermometers inside the coolers. Restaurants must comply with the U.S. Food and Drug Administration's Hazard Analysis Critical Control Point (HACCP) guidelines to ensure that food is safe for consumption.

Five years ago, the company approached CM Systems—known at the time as Orderite—seeking an automated, hassle-free solution consisting of wireless sensors that captured ambient temperatures, along with Bluetooth-enabled temperature probes to monitor the temperatures of meat and other raw ingredients, as well as cooked products.

Five Guys began installing the ComplianceMate system at its each of its new stores in 2011, and it plans to implement the technology this year at all existing restaurants that do not yet have such sensors in place. Each restaurant stores all raw ingredients within cold holding units (most locations have three of them), or in a walk-in cooler at night or when those products are not being used right away. A Point Six sensor is installed within each of these four coolers. Another sensor is installed in the food preparation area, in order to ensure that the room's temperature levels do not rise high enough to make the preparation of fresh food a concern.

The sensors capture temperature information and transmit it every five minutes to a Point Six gateway, which captures that data and forwards it to the cloud-based server hosted by CM Systems. How often the device transmits data to the server is configurable, says Thom Schmitt, CM Systems' COO. "They can identify how those parameters should be set."

ComplianceMate Food Safety Management Software captures, stores and reports that data, then displays it so that Five Guys can monitor temperatures in specific restaurants at particular times. The software also issues alerts in the event that temperatures are either too warm (for instance, if a cooler is not operating properly, or if a door is left ajar) or too cold (which could potentially freeze the food items).

In addition, CM Systems provides a Bluetooth-enabled temperature probe that staff members use with an Android tablet running a ComplianceMate app. The probe transmits data to the tablet, which forwards that information to the server, while the tablet can display an alert for users on its screen so that they can immediately take corrective action. The users then follow the app's prompts to indicate how they resolved the issue, such as discarding the affected product.

The solution is available for an initiation fee, Schmitt says, after which monthly fees are charged, using a software-as-a-service model.

The ComplianceMate system has reduced labor costs at each restaurant, Gibson reports, since personnel no longer need to manually log temperature results using pen and paper, and his company is thus assured that the numbers are accurate. The solution has also caught temperature problems as they occurred, before they could lead to the discarding of thousands of dollars' worth of raw ingredients. Most importantly, he adds, it helps ensure that the product is safe for customers. "It's a valuable tool to have," Gibson states. "I think of it as extra insurance."

The historical data from the system also allows Five Guys to track the health of its coolers, predict when one might fail (based on temperature readings taken over time) and replace that unit before a complete failure can occur.

Now, the restaurant chain is adding the wireless sensors to its milkshake machines. Several locations have added this equipment during the past year or so, and more are coming online as the milkshake offering expands across all of Five Guys' restaurants. A Point Six sensor installed in each machine's hopper, the company explains, is used to verify that the product remains at the proper temperature throughout the day.