The aircraft manufacturer is asking suppliers to tag all traceable items, and is increasing the RFID expertise of its staff to support the technology's deployment across the supply chain.

Feb 23, 2015Airbus has revealed that it has asked its supply base to tag all traceable items with passive RFID transponders. Traceable items are those that are serialized, repairable, replaceable, maintainable or life-limited. Suppliers can choose to put an RFID integrated nameplate on an item in order to replace a conventional non-RFID nameplate, or they can opt to add a separate RFID tag elsewhere. At the same time, Airbus is strengthening the RFID training of its own supply chain engineers based across the United States, Asia and Europe, in order to support the supply chain adoption of radio frequency identification.

The effort to deploy permanent RFID tags on items—part of a company-wide project to improve traceability—is being rolled out in several phases. At last year's RFID Journal LIVE! conference and exhibition, Carlo Nizam, Airbus Group's head of RFID and value chain visibility, announced that his firm would begin tagging all traceable items that it manufactures internally (see Airbus to RFID-Tag and Track All Parts Made In-House). Toward the end of 2014, the aircraft maker expanded its deployment further to include traceable items manufactured by its external supply base. This effort is split into two groups, with target dates slated for completion by the end of 2015 and 2016, respectively. 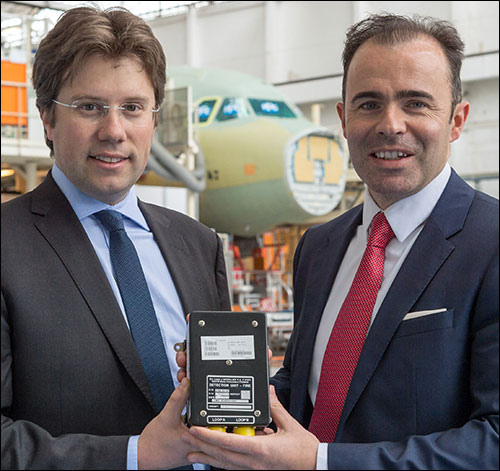 Paul-Antoine Calandreau, manager of Airbus' flyable RFID project, and Carlo Nizam (right) hold a part fitted with an RFID integrated nameplate, which combines the functions of a conventional nameplate and an RFID tag.

"Our deployment has entered a new phase," Nizam says. "Over the years, our focus has been to use the technology internally across the Airbus Group, to enable the digitalization of our industrial processes and demonstrate the benefits through leading by example. But it has always been an important part of our vision to take an approach that creates value for the whole industry, for all actors: our supply chain partners, airline customers and service players. The expansion to include permanent RFID on all traceable items will do just that and help enable value for everyone, both upstream and downstream."

In 2012, Airbus tracked just over 1.2 million items across its production aircraft. By 2018, the company estimates it will be tracing more than 2.6 million items—more than double that amount—which is one reason why it needs to use RFID to digitalize processes, Nizam says, since keeping track of so many parts manually via paper and pen is too onerous.

Nizam is aware of some issues that early adopters in retail have faced in getting their supply base to adopt RFID. His goal, therefore, is to provide flexibility and support to his company's supply chain. Suppliers can choose to use what is known as an RFID integrated nameplate (which has an embedded RFID transponder in it) to replace a conventional non-RFID nameplate, or they can utilize separate RFID tags in addition to existing nameplates. Airbus is also beefing up the RFID expertise of its supply chain engineering teams, he says, in order to help support supply chain adoption. In addition, the firm is openly sharing its lessons learned from its internal company deployments, to help supply chain partners take advantage of the technology capabilities for their own internal benefits.

Aircraft parts manufacturers, such as Rockwell Collins and EAM Worldwide, are employing RFID internally (see Rockwell Collins Explores Ways to Benefit From RFID). According to Nizam, one part manufacturer recently asked if it could tag an additional 600 components that it produces for each Airbus A350 aircraft (at present, only 2,200 parts are tagged per plane, so tagging 600 additional items is a significant expansion), because it wants to use RFID to support a ramp-up in its own internal production processes of those parts for the A350 aircraft program. That supplier is now working with engineers at Airbus to make this goal a reality.

It will take time for suppliers to tag parts, and for an Airbus facility to receive those tagged components and put them on an aircraft, so it will take a while for the new categories of tag parts to enter service for customer use. However, airlines are already beginning to take advantage of tags attached to seats and life vests installed on Airbus planes (see Airbus Expands RFID Part Marking Across All of Its Aircraft Families). Some of the more savvy carriers are realizing that RFID can be used not only to track parts, but also for physical logistics, tooling management, aircraft configuration and other processes. Airbus is providing both guidance and consulting services to help these companies develop a smart approach to using RFID.

"Our intention, from the very beginning, was to develop a holistic approach that maximizes benefits for everyone in the value chain," Nizam explains. "For us to succeed, our suppliers upstream need to succeed, and our customers downstream need to succeed. So we've been trying to help the industry move away from an analog- and paper-based supply chain to a more streamlined, automated and digitalized supply chain. RFID helps to create that digital state of connectedness to our parts and processes that many are now calling the Internet of Things."

Nizam, along with several supply chain partners, will be speaking at LIVE! 2015 to discuss the value that RFID is creating across the aerospace value chain.