Libelium has released a smart parking solution enabling cities to use Waspmotes to detect the presence of cars in parking spaces, and to transmit that status to a server that both commuters and the city can access.

Jun 09, 2011This month, Spanish wireless communications hardware firm Libelium released a smart-parking system that employs wireless sensors in parking spaces to transmit data indicating whether or not a particular space is occupied. The solution is designed to help cities or parking authorities manage parking and share information with commuters regarding which spaces are available at any given time.

The solution consists of a wireless mesh network of Waspmotes—Libelium's sensor device that detects the presence or absence of a vehicle, and then transmits that data accordingly—which can either be buried in a parking space or mounted on poles or lampposts, to serve as a repeater. This summer, the motes are being tested by the Spanish city of Santander as part of a €1 million ($1.5 million) wireless technology project. The project, known as SmartSantander, is being managed by a consortium of companies, universities and research institutes, in order to test Internet-based technologies on a citywide scale. 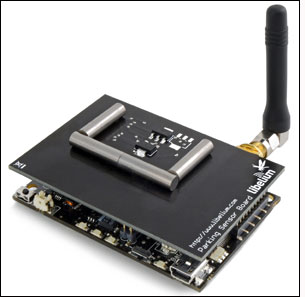 Libelium sells its sensor motes for detecting and transmitting sensory data for a variety of industries, including agriculture, health and logistics. Smart Parking is the latest addition to those solutions, and is part of Libelium's Smart Cities system. The Waspmotes, which consist of a magnetic sensor, a battery, a ZigBee 2.4 GHz 802.15.4 radio transmitter and an antenna, are enclosed in a PVC container buried at the surface level of the road at each parking space, according to Javier Solobera, Libelium's sales engineer. A plastic cover on top of the container is watertight, but allows access to the device in the event that it requires a battery replacement or repair.

The Waspmote wakes up at regular intervals (typically every few seconds). If a car has parked over the mote, the magnetic sensor detects a large quantity of metal, thereby indicating the presence of a motor vehicle. The mote then transmits its own unique ID number, as well as the new status—in this case, the vehicle's presence. The transmission can be received by repeaters installed on poles or other aboveground locations, or by other buried Waspmotes, via the ZigBee connection. A router then transmits the parking data over a GPRS connection to a server, which can be hosted by a city, a parking authority or a third party. The routers can also send data to a back-end server via Wi-Fi.

Commuters searching for a parking space can sign onto the server using a cell phone or some other Internet connection, and the server then displays a map of the area in which the commuter seeks to park, or offers lists of locations in which parking spaces are available.

The mote sensors can also detect when a car leaves a parking space, and forward that new status along with its unique identifier.


The Waspmotes come with a choice of seven different radios that provide a range of 300 meters to 40 kilometers (with the most powerful radio), though Solobera says the distances would not be that great in a city in which obstacles could block transmission. Although the parking motes employ a magnetic sensor, more than 50 different sensors can be used with the device, including temperature or radiation sensors for other applications.

For its SmartSantander project, the City of Santander initially installed a small quantity of Waspmotes in the city center in the spring of this year, in order to determine how effectively the system could detect the presence or absence of a car in each parking space, says Alicia Asín, Libelium's CEO and cofounder. The city is now utilizing hundreds of motes in its streets. The parking project is one of a variety of wireless sensor-based projects being conducted by the consortium of companies and academics, including the management of heating, lighting, irrigation controls at parks, traffic control and environmental management, such as pollution and noise measurements. All of the solutions would be managed on Internet-based servers.

The smart-parking solution was tested in a laboratory by the Network Planning and Mobile Communications Group, at the University of Cantabria, before being placed in town at parking spaces. The sensors were also mounted on lampposts to serve as repeaters, to send that fed data via GPRS to a Web-based server.

In Santander, each time a vehicle stops over a mote, or leaves the same space, an update is posted to the server. In this way, not only can commuters view data to determine where they should seek parking, but the city can utilize the collected data to learn, for example, when a vehicle has stopped too long in a loading zone.

Since the motes' commercial availability was announced last week, Solobera says, the system has no other end users at present. However, he adds, the company is currently in discussions with potential users throughout the world, primarily in Europe.

A similar solution is offered by Streetline Networks, a Palo Alto, Ca., provider of a hardware, software and data-management solution for cities to track parking occupancy. The Streetline system was used by the Port of San Francisco (see SF Uses Wireless Sensors to Help Manage Parking), and is currently installed in about 80 cities, says Kelly Schwager, Streetline's VP of global marketing and communications. In December 2010, the firm released a consumer application in which drivers in cities using the Streetline system can access information about the locations of parking spaces in their vicinity, via an iPhone or Android mobile phone, once they've downloaded the application.