The Finnish startup says its system has allowed tag research and design teams to reduce by half the time needed to bring new tags to market.

To help tag makers speed up the R&D process, a number of businesses have offered tools for testing RFID inlays. Once such company is Finnish startup firm Voyantic, which developed a product known as Tagformance. Voyantic's CEO, Jukka Voutilainen, says his firm's tool is unique in that it not only verifies that tags operate properly, but also qualifies how well they function. According to Voutilainen, the testing tools have enabled tag research and design teams to reduce the design time required to bring new tags to market by half. 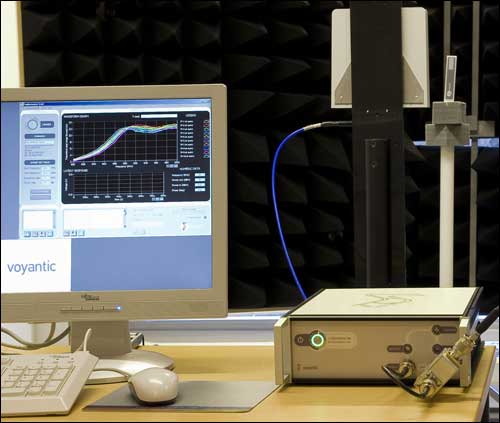 The Tagformance Lite device, shown here with an RFID tag positioned opposite a tag being tested, plugs into the USB port of a computer running Tagformance software.

Voyantic grew out of research that Voutilainen and his colleagues carried out in 2004 at the University of Helsinki. "We started offering some [UHF passive RFID] tag measurement services and consulting in 2006," he explains, "and then, in the spring of 2007 we launched the Tagformance product."

Tagformance—a product line with a shared software backbone that runs on the Tagformance Lite measurement device—is used with special extensions based on a particular user's needs. The measurement device is a specialized RFID reader with an input and output antenna port—one used to transmit a signal to the tag, the other to receive the tag's backscatter signal, which the software then analyzes. The device, roughly the size of a shoe box, can be easily transported and plugs into the USB port of a desktop or laptop computer, running the Tagformance software products that the user requires. There are four different Tagformance software products: the Tag Designer Suite, the Application Development Suite, the Protocol Testing Suite and the Tag Production Tester Suite.

Tag developers can employ the Tag Designer Suite to evaluate the performance of a prototype during the design-engineering process. The suite's software has specialized algorithms to determine and characterize a tag's radio frequency sensitivity and backscatter signal properties, in accordance with the EPC Class 1 Gen 2 standard, Atmel's proprietary Tagidu protocol or EM Microelectronic's EM4122 protocol.

"We use Voyantic's [Tag Designer] software to characterize RF performance of our [tag] products," says Andre Cote, Omni-ID's CTO. "The software allows you to plot the RF response curves [from various tags] against each other, so you can look at how one tag performs against another for various tag designs."


One possible use of Tag Designer is to run what is known as a frequency sweep on a prototype tag, to measure three key metrics: which frequency produces the best tag response, the amount of RF power required to excite the tag, and the number of successful reads at various distances for each frequency and power level. (Voyantic has posted a demonstration video here.) Companies using Tag Designer generally place the measurement device and prototype tags in an anechoic chamber to reduce ambient RF interference when testing tags.

The Application Development Suite is designed for systems integrators or similar service providers that need to test tag performance parameters while in the field, in order to determine which tag models would be the best performers for specific use cases. The software can test the responsiveness of a large population of tags as they move through read zones, while also determining the level of interference caused by nearby RFID interrogators. This enables users to optimize the RFID hardware layout.

The Protocol Testing Suite is designed to allow tag makers or IC designers to test their tags for conformance with the EPC Gen 2 standard or customized RFID protocols. Chris Segura,


Impinj's senior marketing manager, says the tester is similar to any off-the-shelf RFID reader, except that it enables a user to select a very wide range of settings when testing a tag—much wider than could be used on Impinj's Speedway interrogator, for instance. Impinj used the measurement device and Protocol Tester software, Segura says, to test and demonstrate special features of a new RFID tag that is still under wraps.

"This device shows that [UHF] RFID is growing up," Segura states, "because it puts a lot of what we do in our RF lab into a portable box. You basically push button A to test parameter 1, push button B to test parameter 2, etc.," in a manner similar to testers designed for other types of communication equipment.

According to Voutilainen, Voyantic's newest offering, the Tag Production Tester, allows tag makers to check samples of large batches of tags after they are produced, or to test each tag as an added step in the manufacturing process. "All tag makers test tags for functionality, but our software tests tag read range by looking at how much power is needed to activate a tag," he explains. "Within a batch of tags, very small things can have a large impact on tag performance. There might be variations [that result in] poor attachments of the chip to antenna. We monitor the performance in the process, looking for changes from one tag to another."

Voyantic reports that the production tester software can analyze tags either in small batches off the production line, or as part of a high-speed production line cranking out 50,000 tags per hour. The company is currently seeking partnership deals with businesses that produce RFID inlay manufacturing equipment, such as Datacon.