Dec 01, 2006The Technical University of Munich (TU Munich) has developed a prototype application using an industrial staple gun mounted on a single-grip harvester to attach RFID tags to felled logs. The system is designed to help forestry companies track the multistep process of cutting down trees and transporting them to a processing plant. This often involves four or five independent contractors. Thanks to the new application, those involved will have a better understanding of how much wood has been harvested, and of the location of the wood at each stage of the harvesting process.

The industrial staple gun is built onto the harvester head, a machine that grabs a tree, brings it to the ground and cuts off its limbs. Tags are automatically stapled to the side of each log's lower end. This automated process sets TU Munich’s application apart from other RFID forestry systems, such as those utilizing RFID tags shaped like nails that must be hammered into logs by hand after a lumberjack fells a tree (see RFID Chops Timber Costs). 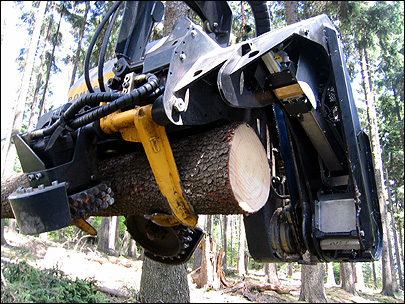 Earlier this year, the German Centre for Forest Work and Technology awarded TU Munich a prize for developing and demonstrating the concept of an RFID device for harvester heads—the first step in the university's prototype application. Funded by the German government, the project to develop the prototype began in September 2004 and ended in June 2006. TU Munich's Department of Forest Work Science and Applied Informatics, specialists in forestry processes, carried out the project in concert with the Department of Logistics / University of Dortmund), which provided RFID expertise.

In addition to developing the tagging device, the team attached an RFID interrogator to the harvester head to perform the first reading of the stapled tag. The system transfers the tag's unique identification number, the only information stored on the tag, to the harvester's onboard computer. The computer then links other information collected by the harvester, such as the log's length and diameter, to the tag's ID number.

The passive RFID tag, manufactured by X-ident Technology, is in the form of a flexible plastic card about the size of a credit card, containing a chip made by NXP Semiconductors. The chip functions on the 13.56 MHz frequency and conforms to the ISO 15693 standard. The tag has a read range of 3.28 to 4.9 feet. The staple goes through the middle of the tag without harming it, since the tag's antenna and chip are on the outer edges. Scemtec Transponder Technology supplied the interrogator.

The forwarder, a person who utilizes a crane to collect logs from the woods, puts the logs on a truck bed. The interrogator, encased in a clear plastic housing and attached between stakes extending upward from the side of the truck bed, takes a second reading of the tags. The forwarder then drives to a road in the forest and unloads the logs into a neat stack on the side of a road. These tasks can take place a few days after a tree has been felled, and the forwarder may, in fact, work for a different company. Adding RFID technology to the mix ensures that all involved parties who want to know the status of the logs have access to that information. It also gives the forwarder the data required to present a more accurate bill.

A second problem involved ensuring the tag could withstand the harsh weather and environmental conditions associated with logging, so that it could survive being moved across oil-splattered and debris-strewn areas in stormy weather. "The big challenge was getting such a sensitive technology like RFID to work in such a rough environment," says Sven Korten, a researcher for the forestry department at the university. Their solution was to use a flexible plastic tag.

In a test of about 500 tags in a forest near Munich, Korten says, none were damaged during the process of felling timber and stacking logs, though approximately 5 percent were lost somewhere between the woods and the processing plant. The project team calculated that the application would cost €4.50 ($6.00) per cubic meter of harvested wood, assuming a transponder price of 50 eurocents apiece, plus the costs of associated hardware and software.

Other participants in the project include Ponsse, a maker of harvesters, and the company's German representative, Wahler Forsttechnik.