The company's RFID-based ToterTrax system, which can automatically record when and where its workers deliver each waste bin, opens up a range of other possible uses.

Jun 29, 2016Waste and recycling bin company Toter is offering a new automated assembly and delivery (A&D) service, leveraging the passive EPC Gen 2 ultrahigh-frequency (UHF) RFID tags that it embeds in its containers as they are manufactured. The solution, known as ToterTrax, consists of delivering the bins to customers and then using RFID readers to collect and store data in the field. It also includes an app and an online portal that users can access to learn more about when and where each bin was delivered.

But the A&D service is just the first phase of the RFID-based offerings that Toter plans to make available, according to Nick DiFoggio, the company's assembly and delivery manager. In the future, the data could also be used to track a variety of actions related to a waste bin, such as swap-outs (the replacement of a damaged bin, for instance), maintenance and measuring the weight of recyclable materials within each bin. The company could also use the solution for analytics, by offering haulers and municipalities the information they need to improve route efficiency, reduce costs, enhance sustainability and ensure compliance. 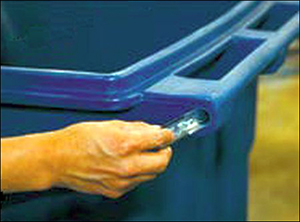 During the manufacturing process, Toter embeds an Alien Squiggle RFID tag into the handle of each cart.

Toter, a division of Wastequip since 2007, has sold its wheeled waste containers (known as carts) nationwide for the past three decades. Its customers are a mix of municipalities and private haulers, DiFoggio says. For several years, the firm has been embedding an Alien Technology Squiggle passive EPC Gen 2 RFID tag into each bin's handle for its own management purposes. By creating an electronic profile for every item, linked to the unique ID number encoded to the tag's memory, the company can automatically identify which customer (such as a private hauler or a municipality) received that bin, as well as when this occurred.

However, DiFoggio says, the company always had other use cases in mind that would benefit its customers. First of all, haulers and municipalities could employ the technology to automatically link each cart to a specific residence or place of business. Traditionally, this was accomplished by manually writing the ID number printed on the bin's front at the time of its delivery. More recently, with RFID tags embedded in the bins, crews could use a handheld reader to interrogate the tag's ID number, but they still had to write down the serial number printed on the bin, which was different than the tag ID. Workers at the office then needed to input that data.

Therefore, as the first of multiple phases aimed at automating bin management in the field for its customers, Toter is offering its own A&D system, by which it delivers new bins to residences or businesses, using a handheld RFID reader to create a record of every bin ID. "We developed the technology to collect data and present it back to the hauler," DiFoggio states.

With the new ToterTrax system, as the carts are manufactured, a Squiggle tag is embedded in each cart, and ToterTrax software enables an RFID reader to not only read the unique ID number encoded to that tag, but also write the cart's serial number into the tag's memory. The serial number and the Electronic Product Code (EPC) number are then stored together in the software.

Toter delivers bins to a customer—or, if requested, to the residences or places of business served by that municipality or private hauling service. Delivery workers load the carts onto the back of a truck, and carry a handheld UHF RFID reader that communicates, via a Bluetooth connection, with a rugged tablet that runs the ToterTrax proprietary app, listing all addresses where bins need to be dropped off.

The delivery workers stop at each location, open the app and select the appropriate address. They then use the handheld to capture the tag's ID number and the bin's serial number, also written to that tag. That information is forwarded to the cloud-based server via a cellular connection. Not only does the tablet send the RFID read data linked to the address, but the GPS coordinates are stored with that address as well, enabling Toter's customer to know the bin's exact location.

The customer's employees—managers of the hauling service for which the bins are being delivered, for instance—can then sign into the hosted server and view up-to-date information regarding which bin has been delivered to what address. According to DiFoggio, the company uses a variety of off-the-shelf RFID readers.

Workers can thus better manage how quickly bins are being delivered, as well as monitor where and when an address might have been missed. In addition, if a resident calls the hauler to inquire when their bin is being delivered, managers can access the software and view, in real time, where the bins are being dropped off, which addresses have already been completed, and thus how close drivers are to delivering the bin being requested by that individual.

The next phase of the ToterTrax system, expected to be rolled out later this year, will enable haulers and municipalities to create a work order for carts that require replacement or maintenance. A customer's employee could simply use that customer's own reader to interrogate each damaged bin's tag, and then utilize the Toter app to input data, such as a description of that damage. Alternatively, if a customer calls in a repair or replacement request, a Toter employee can enter that information into the ToterTrax software. In either scenario, Toter personnel could access the request from the app while in the field, removing or replacing the bin as needed.

"It allows whoever the end user may be to track the entire life cycle of the cart," DiFoggio explains. "This is just the beginning." He says Toter took its time to release ToterTrax for A&D services, which was made available last month—two years after the tags were put into use with bins. "We spent a lot of time talking to our customers about what their needs and wants are." To date, he notes, a private hauler and a municipality—both in Tennessee—have begun using ToterTrax for A&D services.

The primary gains for Toter, DiFoggio reports, are that the RFID technology enables its employees to deliver the bins faster and more easily, while also providing the company with accurate information that appears directly on its online portal. "We know ToterTrax is making our crews more efficient," he says.

For its customers, DiFoggio adds, the benefit is fast access to that same accurate information, which can come in handy if haulers receive a phone call from a resident awaiting bin delivery. "They don't need to make a call to us," he states. "They can tell Mrs. Smith, 'The truck is in your neighborhood.'"