The State of Omnichannel Retailing

The concept of buying via any channel is catching on, but challenges will expand as more shoppers buy items online and pick them up in-store, or buy those goods in-store and have them shipped to their home or another store location.

Jan 13, 2019A colleague sent me an article from Retail TouchPoints about how U.S. retailers are lagging those in Europe in terms of offering "buy online, pick up in-store" (BOPIS), which is known as "click and collect" in Europe. The article, titled "Study: Only 27.5% Of U.S. Retailers Offer BOPIS, Trailing UK, France, Germany," states:

"Buy online/pick up in-store (BOPIS) has been recognized as a key element driving seamless shopper journeys, but U.S. merchants remain a step or two behind their cross-border counterparts when it comes to deploying this service. While 37.6% of retailers across seven countries offered BOPIS services in 2018, only 27.5% offered BOPIS in the U.S., according to the OrderDynamics survey Omni-2000 Research: Global."

The study assesses the omnichannel customer buying journey of more than 2,000 international retailers. It reveals that 64 percent of retailers in the United Kingdom offer BOPIS to customers, followed by France (50 percent), Germany (43 percent), Australia (31 percent) and Canada (31 percent).

It’s not clear why the United States is behind. One reason might be that BOPIS is harder to do when you have much larger stores with more products. But one thing is clear: more and more shoppers want to buy online and pick up in stores. According to CNBC, BOPIS sales were up 47 percent in the United States this holiday season (see “There's never been this kind of surge in last-minute shoppers picking up online orders”). Target’s BOPIS sales tripled. Retailers that are not using RFID to track inventory are going to run into a growing number of issues as more consumers buy products online and pick them up in-store, and as they demand to buy and receive goods anywhere. Take a look at the image below, which we created for our Retail Digital Transformation white paper. 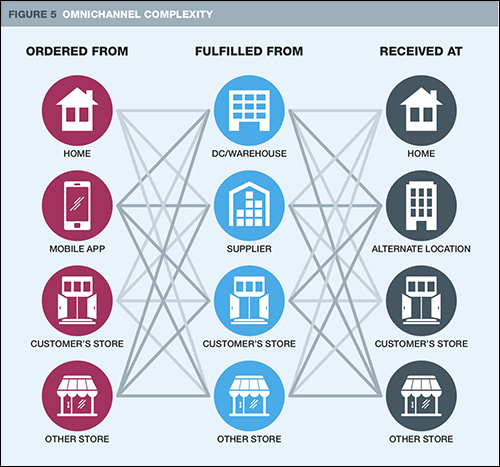 The chart shows where consumers might want to buy an item, where a retailer might fulfill an order from, and where the product might be delivered. There is an extraordinary amount of complexity in an omnichannel supply chain that just doesn't exist in the old brick-and-mortar model. How will retailers know where items are located and what is in inventory in every area of their business if they don't use RFID?

It's possible to get by without RFID, as companies can hold more safety stocks and hide inventory from customers. Many retailers that currently offer BOPIS will not show an online customer a product if only two or three units are left at that shopper's local store. That's because they know their inventory numbers are not accurate, and it's possible they might be out of stock. In their view, it's better to not sell an item than to sell it and have the customer arrive at the store only to find the product has sold out.

Not showing consumers items reduces sales, and holding larger safety stocks increases costs and ties up capital. The retailers that will win in a truly omnichannel world are those that use RFID and other technologies to gain an accurate view of their inventory in real time, and can thus make every product available to every customer, no matter how a shopper chooses to buy that item.

Target has been using RFID to execute its omnichannel strategy, and its BOPIS program has been an enormous success (see Learning from Target). It will be interesting to see whether other retailers figure this out before it's too late.

Mark Roberti is the founder and editor of RFID Journal.