The NFL RFID-Tags Its Footballs

The National Football League's Competition Committee is reviewing the results of a preseason pilot of Zebra UWB RFID tags embedded in balls, as an extension of an existing system that tracks players' movements during games.

Sep 06, 2016The National Football League's Competition Committee is reviewing the results of a pilot that involved embedding ultra-wideband (UWB) RFID tags in its footballs. The goal is to analyze how well the league gained visibility into the pigskins' locations and movements throughout this year's preseason games.

The project is the next step in the NFL's Next Gen Stats initiative, by which the football league aims to use technology to provide more game and player performance information to broadcasters and fans, according to Matt Swensson, the NFL's emerging products and technology VP. 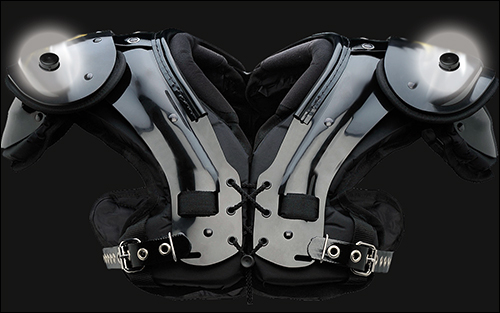 Since 2014, the NFL has been using Zebra's UWB RFID tags embedded between layers of plastic in players' shoulder pads.

Since 2014, the National Football League has been embedding Zebra's ultra-wideband (UWB) RFID tags between layers of plastic in players' shoulder pads (see story RFID Drafted to Track NFL Players' Every Move During Games and The NFL's Next Generation Statistics). The battery-powered tags are employed to provide fans and the media with statistics regarding athletes and their performance, information that previously had to be detected and recorded manually.

This data is already being provided to broadcasters so that they can present more information to the public about player and game statistics during plays. In addition, the information enables Xbox One users with Microsoft's NFL app to access a three-dimensional representation of the football field, along with where players are and have been located on that field. The NFL's Next Gen Stats website will also display more information based on the data this season, Swensson reports, adding, "We'll continue to grow out the content pieces online."

The NFL plans to use the UWB RFID-tagged balls for Thursday games throughout this season, Swensson says, though the ball-related data will not initially be made public. Instead, this data will be collected and integrated with the player-related data in order to enhance the information already being collected. "We wanted to take baby steps," he says, explaining the NFL's approach to using RFID-tagged balls. Eventually, he notes, the technology could be used to measure such variables as where and how often passes are thrown and caught on the field, how fast and far a ball is thrown, and the number of rotations that the ball makes during a pass.

All 2,500 NFL players wear the tags in their shoulder pads. Additionally, 20 to 25 Zebra UWB receivers have been installed around each of 31 U.S. stadiums, and at several international arenas where NFL teams play, to capture tag transmissions and forward t data to Zebra's MotionWorks software. The system utilizes triangulation to identify players' locations and movements, says Eric Petrosinelli, Zebra Sports' general manager.

This summer, Zebra and the NFL worked with ball provider Wilson Sporting Goods to embed a specially designed Zebra UWB tag into each ball. The tag is about the size of a quarter, Petrosinelli says, and was customized by Zebra for this project. While the shoulder-pad tags worn by players weigh about 8 grams (0.28 ounce) apiece, the ball tag weighs less than 4 grams (0.14 ounce), for instance. It is being embedded in the ball's material behind the lacing, he adds, and is invisible to players.

A football's UWB tag transmits a signal multiple times per second in the 6.35 GHz and 6.75 GHz frequency bands. Receivers installed throughout a stadium can read those signals from as far away as 325 feet. The battery built into each tag has a lifespan of at least the full season, according to the company.

"This is the third year of our relationship with NLF," Petrosinelli says, adding that it also marks the second season during which the Zebra receivers are being used at all NFL stadiums in the United States. Most of the devices are mounted under ribbon boards (LED displays specifically designed to show advertisements, animations, promotions, scores or statistics) or other, higher locations around the facilities, in order to capture tag transmissions.

In 2013, Petrosinelli says, when the NFL first began investigating technology to improve its visibility into player and team performance, the league sought a vendor and solution that would enable scalability beyond simply tracking players' movements. Tracking the ball, he explains, "has always been part of the innovation track."

Zebra's solutions provide operational visibility, Petrosinelli reports. While the NFL was already gaining visibility into players' movements, Petrosinelli notes that "the ball is the most important object in the game." The ball-tracking solution enables the league to put further context into that data by knowing the ball's location in relation to each player at any given time. For instance, if a player accelerates while the ball is in the air, the NFL has a greater understanding of what he is doing and why.

The NFL is also looking into the possibility of using the tags to determine ball movements during field-goal kicks, Swensson says. In this case, the league has been considering whether goal posts should be narrowed due to the high percentage of successful field goals that have been kicked during recent seasons.

Initially, however, the league's Competition Committee is reviewing how well the RFID-tagged footballs worked, whether they created any degradation in player or ball performance, and what kind of data they provided.