The company's new Corby center brings UHF RFID technology closer to the United Kingdom's retail market, which can use its simulated stores, warehouse and laboratory space for testing and designing RFID systems. 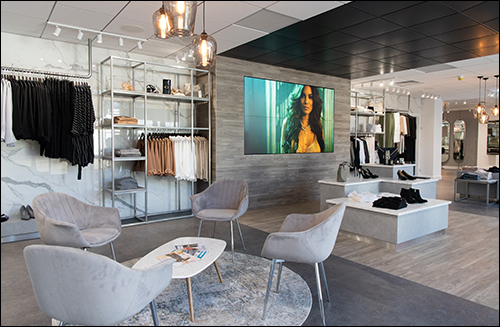 In 2016, the site was the scene of an industrial fire that destroyed the original structure; SML has since fully rebuilt its manufacturing facilities at this location, in addition to adding the RIS. The facility, which employs a staff of 70 employees, will serve a busy market, Frew explains, noting that the United Kingdom is among the top five apparel markets in Europe, representing 13 percent of all RFID sales in recent years. It was the third and final of three planned RIS openings aimed at helping customers understand the technology and better strategize deployments, the company reports.

The Plano RIS has been in use since June 2019, Frew says, by companies seeking to learn about RFID solutions, generate ideas and test the technology. "We've had dozens of customers come through," he recalls, "taking the opportunity to touch the technology and see its simplicity." Additionally, workshops and a customer advisory meeting have been held there this year. The Shanghai RIS opened in September, and the company expects to see similar activity there as more RFID business launches throughout Asia.

All three centers are similar, SML reports, but the Shanghai site is the only one that includes a convenience store as part of its demonstration areas. The Corby RIS, like the others, includes warehousing and a store sales floor, as well as a laboratory space for innovation. The lab includes multiple anechoic chambers for testing RFID tag read functionality, as well as a space for tag prototyping. The lab replaces a previous facility at SML's manufacturing site within the same space. SML also offers similar labs in North Carolina and in Dongguan, China.

The company envisions the 30,000-square foot Corby center as a collaboration space for retailers that are new or existing users of the technology. For instance, Frew says, a retailer might already have an RFID system in place that manages inventory for apparel or footwear, but might intend to expand its implementation to track inventory related to other products that might require a new tag form factor or some other modification.

For instance, a company could try to tag accessories and test out the appropriate form factor, make and model of tags to determine any customization that might be required. The space could also be used to test new deployments before they are taken live at a customer's actual store, and it could serve as a customer's first experience with RFID technology.

The grand opening, held on Nov. 14, included 14 customers and a total of 70 attendees, Frew says. "It was a big success for us," he states. "We've gotten great feedback." The Corby RIS center includes technology from SML's partners: Bluebird, Impinj, Microsoft, NXP Semiconductors and Zebra Technologies. 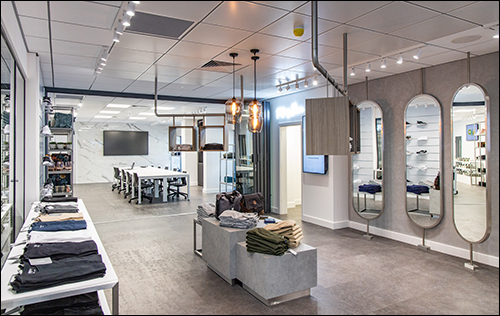 SML's technology is in use at 1,500 U.K.-based stores, Frew reports, including in grocery and general-merchandise retailers Marks and Spencer, Tesco and Matalan. Tesco uses SML's Clarity solution at its stores to boost inventory accuracy and on-shelf availability for its F&F clothing brand, enabling click-and-collect features for online shoppers since inventory visibility ensures products are available in a given shopper's geographic location.

Matalan deployed RFID technology in November 2018 across 220 stores (see U.K. Home Goods and Apparel Retailer Boosts Accuracy With RFID). "The U.K. market is probably the most mature of any single regional market in the world," Frew says. The goal for SML, he explains, is to continue to get RFID into the hands of those who will be using the technology at stores and warehouses, as well as in the supply chain. "We want to facilitate our customers to be able to touch the technology," he adds, and to "see how easy it is and how they can use it in real stores, early on in their investigation process."

Several companies have expressed misconceptions about the value the technology can offer, Frew says, including how quickly a return on investment might be realized. "We have a growing number of retailers that are seeing significant lifts in sales," he states, but they are doing so by keeping the initial deployment simple and leveraging RFID for inventory management first. Additional features can be added at a later date, Frew adds, such as self-checkout, fraudulent returns detection, markdowns, loss prevention, artificial intelligence (AI)-based shelf-capacity adjustments and interactive customer experiences.

"Everybody is migrating up that ROI [return on investment] pyramid," Frew says, starting with inventory management and working into more advanced processes. "The U.K. and Europe are no different. They are following that same model." Those that don't follow the simple to more complex features tend to struggle, he adds. "Just focus on getting your inventory accuracy up to 98 percent and let results come in before looking at other processes."