The global car rental company has deployed the technology at about 200 branches to identify the locations of car keys, thereby reducing customers' waiting times and automating the collection of data related to when the vehicles are returned.

Nov 10, 2014Sixt, based in Germany, is one of the world's largest car rental agencies. It operates 2,200 branches worldwide, with a total of 144,000 rental cars available, and has earned a 14 percent share of the European rental car market. One of the company's challenges has been keeping wait times down for those renting vehicles, as well as ensuring that customers can rent the cars of their choice. A source of frustration for customers and employees at some locations has been the amount of time required to locate keys for a specific vehicle.

"When a customer comes in to a big branch with 10 desks and says 'I want a BMW,' the agent has to look for that key," says Alexander Boone, Sixt's head of project and innovation management. 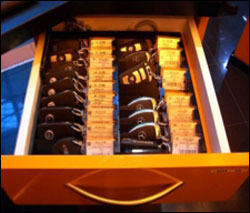 Every RFID-enabled rental station has two key drawers, each equipped with a reader antenna.

"The main target for us has been to reduce time delivery of each key," Boone explains. "We found out that if you have a big branch with 600 rentals a day or more, it can take up to three minutes to find the key that's needed." Thanks to the RFID system, he says, it now takes only 20 seconds.

The solution, provided by Vilant Systems, consists of key fobs with embedded passive ultrahigh-frequency (UHF) RFID inlays, as well as the installation of readers in sales counters, at the lock boxes in which customers can return car keys when sales offices are closed, and at the bins where the keys of cleaned vehicles are deposited. Sixt's own management software uses the RFID data to track where in the office the key is located for a particular car that will be rented, as well as, in some cases, when a vehicle was returned and when it is ready for its next rental. The RFID solution has been deployed at approximately 200 branches in 10 countries.

Prior to adopting RFID, Sixt had experimented with the technology. About eight years ago, the company first began testing a high-frequency (HF) 13.56 MHz RFID solution at five of its branches in Germany. A passive HF tag was attached to each car's key fob, and readers were installed in key-storage drawers located under the counters. Software managed the collected read data locally at each site. However, Boone says, the HF system did not perform reliably. Tags of keys placed in the RFID-enabled drawers were not always read, and staff members thus had to manually search through all the drawers in order to find the keys they needed. In addition, he reports, the technology was expensive, and the HF readers' poor read rate, as well as the lack of data filter, made it impossible for Sixt to receive and manage data from its centralized rental management IT system.

Due to such deficiencies, Boone says, the HF solution was not further deployed. Last year, however, the company began seeking an ultrahigh-frequency (UHF) RFID solution. The firm issued a request for proposal, and selected Vilant's solution, explains Antti Virkkunen, a Vilant cofounder who manages Central European operations from Vilant's Swiss office. Sixt found that UHF technology offers a more reliable and longer read range when tags are applied to key fobs, and is less expensive to implement. What's more, Vilant software on the readers could forward the collected read data to Sixt's own centralized car rental management software, which Sixt modified to include key location data based on information culled from the Vilant readers.

In late 2013, Sixt piloted the Vilant solution at its rental agencies at Switzerland's Zurich Airport and in downtown Zurich. Switzerland was selected because the vehicles rented within that country typically remain there, and it was faster to tag them for piloting than it would be in larger nations. Following two months of testing, Sixt decided to roll out the solution to its 200 largest rental facilities. The quantity of readers installed at each location varied according to the volume of cars rented there.

The 200-branch deployment took place throughout the course of six months. Each car's key fob was tagged with a Smartrac MiniWeb inlay, Virkkunen says. The sales counters employ ThingMagic M6 readers. Each worker's station contains two drawers for holding up to a total of 40 keys, and each drawer is equipped with an RFID reader antenna. Since the sales counters had already been designed to accommodate a future HF RFID system, no mechanical changes were necessary for the UHF installation.

For smaller branches Nordic ID Stix readers are used, connected to PCs via a USB cable, to read tags as keys are checked out or returned. This is controlled via local Vilant Engine software.

At some sites, lock boxes for returned keys have been equipped with ThingMagic Astra-EX readers. In this way, when customers return cars outside of normal business hours, they can deposit the keys in the box, and the reader will capture the tag's ID number and forward that information to Sixt's management software via a cabled local area network (LAN) connection—or, in more remote areas, via cellular transmission.

Finally, at some branches, RFID readers are installed in trays containing keys of newly cleaned cars. When workers or subcontractors finish washing a vehicle for the next rental, they place that car's key in a chute that sends it to the Sixt office, where it lands in a tray to be returned to a drawer at the sales counter. An M6 reader at that location interrogates the key fob's tag ID number, and Vilant software on the reader transmits the data to Sixt's car rental management software, thereby updating the vehicle's status as ready for renting, as well as indicating in which specific tray its key is located.

At the sales counter, if a customer requests a specific car, a representative can search for that vehicle in the rental management software. He or she can then view whether the car is available, as well as where the keys are located, based on the RFID data.

In some instances, customers lose key fobs. For that reason, Sixt has several Zebra Technologies ZD500R RFID printers—typically, one printer at each geographical region to provide additional tags.

In the future, Boone says, newly opened Sixt branches will be equipped with the RFID technology required for key tracking, while the company is also experimenting with the use of RFID tags on the vehicles themselves. "There's quite an interesting use case for parking management," he says, adding that RFID could be used to record the specific space in which each car has been parked. Such application, he notes, is still in an early testing phase.