Sep 11, 2019Event payment technology company Billfold POS has been providing an RFID-based payment solution to events around New York for several years. The firm is now expanding its reach across North America with a system consisting of an RFID-enabled wristband and payment terminals that capture a user's ID number and credit card access with each tap of the bracelet.

The system can reduce a typical credit card transaction from one minute to less than five seconds for individuals wearing the wristband, according to Stas Chijik, Billfold POS's co-founder and CEO. One of the company's customers, Avant Gardner, has been using the technology at its three venues in Brooklyn and has seen its per-person drink and food sales increase by about 40 percent as a result, says Martin Naughton, Avant Gardner's director of food and beverage. 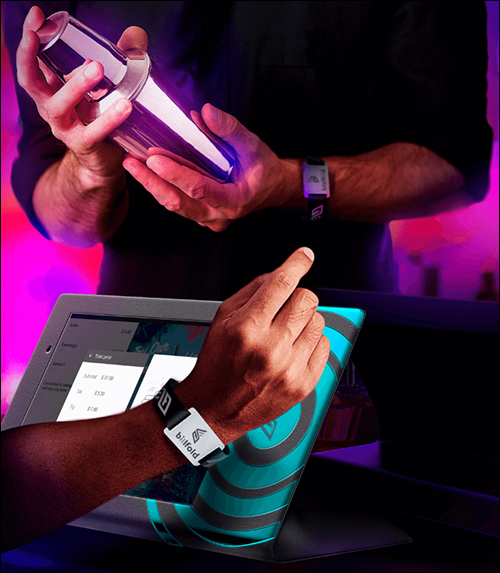 The solution consists of self-serve kiosks at which individuals can link their wristband directly to their bank or credit card, as well as customer- and vendor-facing screens at the point of sale (POS) so that transactions can be conducted quickly, without requiring cash or credit cards. The RFID tags built into the wristbands were provided by Australia's 4ID Solutions.

Billfold POS was launched by the owners of event catering business One Stop Beer Shop, which it used for food and beverage sales at large-scale events in New York. The company noticed that credit card payment transactions slowed down service, and that this was affecting revenue. If queues and resulting wait times became too large, sales were lost. The firm began looking for solutions and found that RFID could expedite the payment process. "A lot of time is lost not so much in payment processing," Chijik notes, "but in customers fumbling with their wallet, taking out cash or a credit card."

Once the company built an RFID solution that it deployed as part of its POS transaction system, the events experienced a 45.2 percent increase in per-person spending, Chijik reports. "That's when we knew it was not just beneficial for us," he says, "but for all event producers across the country." The firm's focus was on venues and events involving 5,000 to 10,000 people, and it developed a software-as-a-service (SaaS) subscription-based solution by which its kiosks and POS readers could be leased and the software managing the data could be provided in the cloud.

The first deployment was at Avant Gardner's Brooklyn Mirage, an outdoor space that operates during summer months. The company has since expanded the Billfold POS system across all three of its venues. Avant Gardner is a three-year-old venue. The company's founders initially operated with large-scale warehouse events, then expanded to a popup summer venue as a proof-of-concept in 2015, before the permanent venue opened in 2017, Naughton says. The firm was soon hosting 4,000-plus-attendee parties at a rate of two to three events weekly.

As a result, Avant Gardner now operates the three venues on a full city block in Brooklyn. As a popup party business, the company had offered cash-only and credit card payment models for its events. The transactions were slowed with the large volume of attendees, however, and it began investigating the Billfold POS solution. 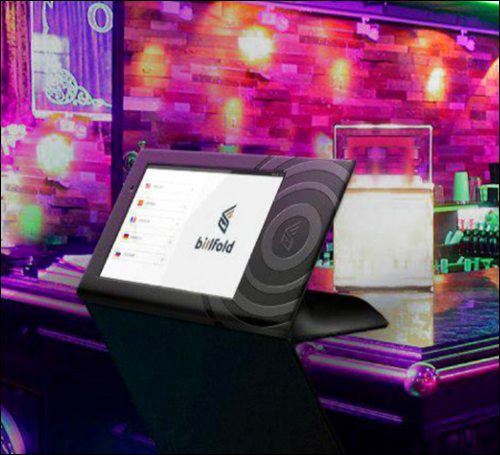 Many wristband payment solutions consist of a "top-up" system, by which individuals must set up a pre-purchased balance, such as $50 or $100, that they expect to spend onsite. If they go over that amount, they must top up the balance with a credit card, or if they under-spend, they must seek a refund. That process leads some attendees to be more careful about how they spend their money. Billfold POS, on the other hand, directly links a customer's wristband with his or her credit card. If the customer doesn't purchase anything, there is no effect on that credit card account, while if he or she is spending freely, spending will be limited only by the credit card account policy.

At Avant Gardner's sites, individuals can purchase a ticket to a concert online or at the door. In either case, they are then provided with a wristband containing a built-in 13.56 MHz HF RFID tag compliant with the ISO 15693 and 14443 standards. They can then enter and proceed to one of numerous kiosks installed at the door. The kiosks have built-in HF RFID readers which capture the wristband's ID when a guest holds it near the kiosk, and the user can swipe a credit card, provide an e-mail for receipts and create a four-digit PIN for authentication with each purchase.

When an attendee buys food, beverages or merchandise, he or she places an order and the terminal displays the sales details on the vendor- and customer-facing screens. A guest scans the wristband and provides the four-digit PIN while workers prepare the order, after which the transaction is complete.

The POS device reader captures the wristband ID, and Billfold POS's app links that ID with the credit card information and the individual linked to that card. The payment transaction is completed, then the funds are withdrawn from the credit card account and are received by the vendor in real time. A receipt can be e-mailed to the individual making the purchase.

This can all be accomplished before a person even receives his or her drink or food, thereby making the transaction process faster and reducing queues. In fact, Naughton says, "It's a five-second process now. By the time the bartender finishes the drink, it's already paid for." As soon as the system was deployed, he reports, "People found it fun." Guests didn't need to fumble with credit cards or cash, and they no longer had to worry about meeting or exceeding a pre-paid amount. 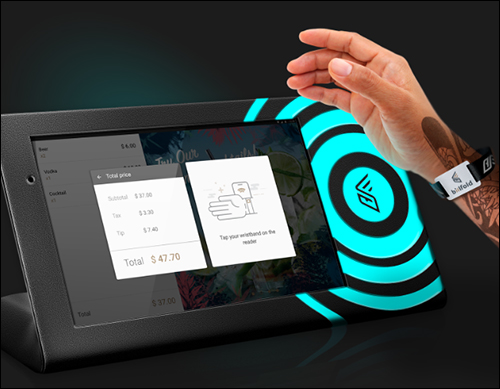 Immediately, Naughton says, the company found that food and beverage sales jumped from $28 to $32 per person up to $44 per person with the Billfold POS solution in place. By reducing queues and wait times for those ordering food and drinks, Brooklyn Mirage is able to free up space for the venue as well, and events can typically serve as many as 6,000 attendees with 25 bartenders, with few or no lines.

When Avant Garner deployed the Billfold POS system, Naughton says, it expected a sales boost of 20 to 25 percent, but it instead found that the increase was between 40 and 50 percent. In the future, the firm plans to expand the use case to enable access to backstage or other areas that could require VIP access. The system could include POS terminals at these sites, so that individuals could pay for VIP access onsite when they wish to access a secured area.

The technology also provides an advertising platform, Naughton notes. For one thing, the customer-facing screen has a dedicated space that consumes half of its face for advertising. That allows the company to display ads for brands, or to use the system to boost sales of products it needs to move more quickly. The Brooklyn Mirage venue is using 80 to 100 screens at the bar areas.

Data being captured also enables marketing, Naughton says. Since users link their ID number and e-mail address with the wristband, their sales history can be collected and targeted advertising could then be sent to them. For instance, if an individual were to purchase a specific brand of liquor on a regular basis, that person's location and habits could be provided to product brands looking to target him or her. The system also enables venues to view how specific employees are performing, since the software stores information about each sale, including who conducted the transaction, what was served, how much was sold and what tip percentages were.

Billfold POS has sold its solution at 400 events throughout the past three years, Chijik says. The company is working with some ticketing partners on an integrated solutions, by which ticket buyers could opt in to use a credit card for purchases as they buy their tickets. Billfold POS also offers a hybrid version of its system with a wristband using 4ID Solution's dual HF and UHF RFID tag, so that the HF function could be used for payments, while UHF could be utilized for access or location tracking with a longer read range.

The company is speaking with a resort in Utah, for instance, about using the hybrid system so it can track the movements of individuals throughout the resort, whether they access towels at the pool or gym, or simply open their locked door. Another application could be to track the stages around which concert-goers congregate, in order to determine who is attracted to certain bands or genres, such as hip hop or electronica, and then compare that data with fans' drink preferences. That information enables cross-promotion.

Billfold POS employs seven developers and releases software updates once a week. Working with smaller venues enables releases to be tested immediately, Chijik says. In that way, he adds, "We're able to ramp up and develop features a lot faster [than those serving stadium-sized venues]. We're not waiting for the next big festival. We have mini-festivals weekly."