Green Growth Brands has deployed a UHF RFID system from Yobi to automatically track plants through cultivation and harvesting, thereby reducing labor and human errors, with a dispensary solution planned next.

Mar 23, 2020The cannabis industry is tightly restricted. Based on state regulations, growers must record and share data about each plant as it is grown, cultivated and harvested or discarded. If information such as the number of plants or a product's weight is incorrectly recorded, that can mean penalties from the producer or the loss of a license.

Nevada Organic Remedies, owned by Green Growth Brands, has automated the management of its cannabis plants from seedling to packaged product, thanks to an RFID solution supplied by Yobi. The solution has enabled the Las Vegas company to collect data that can be shared with state regulators with less labor, as well as with the assurance that the information is error-fee. 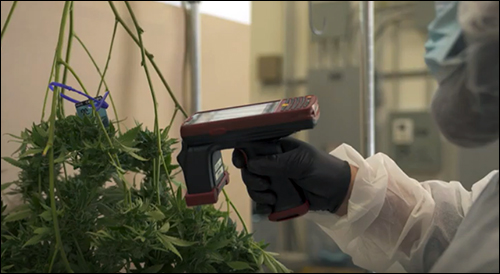 Yobi is a Nevada- and Colorado-based firm that offers a next-generation cannabis operations platform created to automate compliance, says Jeremy O'Keefe, the company's founder and chief executive officer. Its solution is designed to meet the unique needs of all sectors in the cannabis supply chain: cultivation, processing, manufacturing and retail. Yobi's founders were previously building frictionless automated shopping solutions for companies like Amazon. As such, it had experience with RFID.

The demand for RFID tracking in the cannabis industry led O'Keefe and his partners to launch a company that offered dispensary management. The firm recently completed a merger with Lodestone Data, which has focused on cannabis cultivation solutions. "Together, we are able to look at inventory across that entire supply chain and leverage RFID in ways that save time and money" for both cultivators and retailers, says Steve Mackey, Yobi's senior VP of sales and marketing.

Green Growth has rolled out the Yobi solution throughout the past year at two of its growing sites. The solution consists of passive UHF RFID tags attached to the bases of young plants, which track them during the growth, cultivation and harvesting cycles, as well as an RFID tag attached to packaged product. Handheld readers enable the capturing of tag ID numbers, while Yobi cloud-based software manages the collected read data. Integration with weight scales makes the capture of each plant's weight at harvest automatic as well.

In Nevada, companies are required to serialize each plant once it reaches a height of approximately 8 inches. That's the point at which Green Growth begins using its RFID-based tracking system. The firm utilizes the RFID technology at its two sites in Las Vegas and Pahrump. Traditionally, the management of the plant growth process was entirely manual, according to Ryan Laughlin, Green Growth's cultivation manager. Each plant was assigned a unique serial number, printed on a label, and details about which processes were provided for that plant were input manually, along with its weight. "It was a lot of tedious data entry," he says.

Much of the process is now automated, the company reports. Seeds or clones begin in batches, at which time they are not uniquely identified. Once they reach an 8-inch height, the viable plants are potted separately and must be independently tracked. A tag is attached at the base of each plant, with a built-in passive UHF RFID chip storing a unique ID. With the Yobi solution, workers employ an Alien Technology ALR 450 handheld reader to read each tag ID, then link that number with the plant's status and any other information.

Based on state requirements, audits of the plants take place on a regular basis. That process traditionally took a full day to complete for a single employee looking at each plant's serial number and recording its information. The work required the time of highly trained employees to ensure that no data was ever entered erroneously. Now, the audit is conducted via a handheld RFID reader within a matter of minutes.

Once the plants are ready for harvest, they are cut and hung from a scale wet. The Yobi app running on the handheld device can link to data on the weight scale via a Bluetooth dongle in the handheld reader. When a plant is hung on the scale, an operator can pull the handheld's trigger, causing the reader to capture the tag ID and also automatically prompting the capture of the plant's weight. That data is then integrated and stored in the Yobi cloud-based software.

Previously, Laughlin says, the weight capture was also accomplished manually. Operators had to stand on a stool to view the scale data, then manually record each plant's weight and serial number in order to create a permanent record that can then be shared with the state. 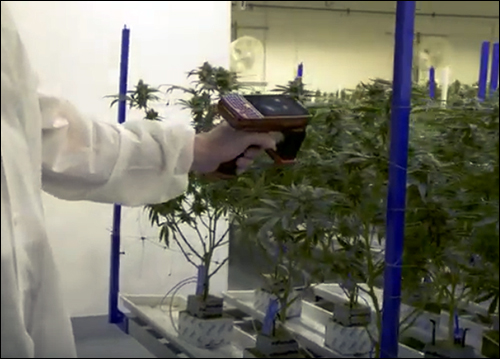 RFID captures the data automatically, which eliminates the manual step of recording during that harvest process. "That's where RFID is so valuable," Laughlin explains. The plants then all go into a harvest batch. The tags that were attached to those plants are stored along with the entire batch as it dries. By reading those tag IDs during the drying process, the company creates a record of what took place for every plant harvested in that batch.

After the plants are dried and trimmed, the resulting product is sent out for state-mandated testing. It is then packaged for retail sale, and a new RFID tag is applied and input into the system. The unique ID number on that tag is linked to that harvest batch and the tag ID number of every plant in that batch. The technology doesn't provide more information than the company had previously collected, Laughlin says, but it accomplishes the same task with a reduction in labor costs and a guarantee of accuracy.

Since the system was taken live in April 2019, Laughlin says, "We're saving a ton of money in labor," and it also offers a failsafe against human input error. That's important, he adds, since any error can lead to the state opening an investigation, which could be time-consuming and costly. Yobi provides an app that is downloaded onto the handheld, thereby displaying data about each plant as it is being read.

The company's next step will be to track the tags on the packaged goods as they move through distribution and to stores. One product type that may be tracked first is cartridges of THC oil, which the company can track via an RFID tag as they move from manufacture to dispensary.

Initially, the company will tag boxes of 100 cartridges, while in the long run, the system could track a tag attached to each cartridge. The use of RFID is expected to reduce labor at warehouses, O'Keefe says, by reducing the number of hours employees spend taking regular inventory counts in order to ensure the product (which can cost about $60 per cartridge) does not go missing. During the coming months, some companies are scheduled to test Yobi's RFID solution for use in automated dispensaries at retail sites.