Thanks to improved production and inventory-management processes, Brazil's R2A has optimized its entire end-to-end supply chain.

Jan 06, 2020By deploying a radio frequency identification system provided by iTag, Brazilian automotive parts manufacturer R2A reports that it has achieved high gains in its operations. Acting as a supplier of bumpers for various models and colors of cars manufactured in that country, the company says it achieved a 6 percent savings in raw materials due to better production planning.

Other benefits of the company's use of RFID include increased inventory visibility; better identification of production batches due to unique ID codes provided by RFID tags; greater speed in locating products in stock; 100 percent accuracy in order picking and truck shipping processes; a 95 percent reduction in delivery errors, providing a savings of 85,000 Brazilian real ($20,750) per year; and real-time inventory updates.

The project was born out of three needs that the company had in its production line. The first was to confirm that what was being manufactured actually underwent its entire manufacturing process. The second was to ensure that all products invoiced to an end customer had actually been shipped on the truck. And the third was to highlight the EAN13 numbers on invoices for large companies that buy its products. The company called on several technology providers to come up with ideas to address these challenges. After reviewing all of the proposals it received, R2A concluded that RFID tags could improve its processes and also generate supply chain savings by eliminating manual steps and ensuring a realistic view of its inventory.

The implementation was performed in two parts. In December 2018, all products in stock were tagged with iTag model 7×2 RFID tags, containing Impinj Monza R6 chips. The integration was done by file, bringing all ERP inventory data to iTag iPrint software, which completed the product conversion to GS1's EPC Gen2 standardization, with newly acquired GTIN registration.

In total, 200,000 items were tagged via this process, making the inventory for large companies ready to be checked and invoiced during the second stage of deployment. According to Bruno Izídio, R2A's quality manager, "While it is a huge job moving items to a tagging area and then storing again, we would rather think of a way to leverage this work by organizing our inventory. Thus, the impact of the operation in this first stage was absorbed by the organization's benefits."

The second stage of implementation began when the RFID label-printing process for the bumper production sector and the control of production order finalization via RFID counting were launched. "We had a very big evolution in control because we were able to pinpoint exactly what we had finished and what was pending production," Izídio explains. "As a result, we were able to generate savings of 6 percent [on raw materials], since we did not have to produce products that we already had in excess in the production and inventory areas."

Thanks to this process, the company has been able to amortize investments in labels and hardware. "We started the process with two people per machine, totaling eight in our production area," Izídio says. "After two months of the RFID-stabilized process, we have relocated and trained two people from this sector to other areas within the group. "

At this same stage, R2A evolved the project to divide the company's areas, placing grids so that no movement of goods occurs without those items passing through the RFID portal. "With this process," Izídio states, "we separate production from inventory, inventory from dispatch, and shipping from shipping, and we place an RFID portal in each area so that, with the pallet placed on each portal, the system will generate appropriate reports regarding product movements."

After the portals were installed, the company explains, it was time to deploy the iTag Alert 2.0 application, with customizations and integrations to the ERP software to enable the firm to have information about returns for the purpose of decision making. "We saw the opportunity to improve stock balance reporting in each industry in real time," Izídio recalls, "knowing what we had in stock (that was a big gain), what we had in the shipping industry being checked (which ensured that we didn't produce anything unplanned) and what was being shipped on the trucks (with a reduction of reverse shipments by almost 95 percent)."

There was also an unexpected improvement in the picking process, Izídio reports.
"When we tag the product and turn on the RFID data collector," he says, "a 'hot and cold' bar gets bigger the closer we get to the products we want, which speeds up searching and increases picking speed." The RFID technology also allowed fortnightly inventory counting—a process that brought positive results because inventory is now always up to date.

Sérgio Gambim, iTag's CEO, says that through innovative practices, the RFID solution deployed at R2A has raised teams' operational requirements and improved business control. "RFID has made it possible to streamline, track and simplify the entire logistics process," Gambim says, "from factory production to the checking of truckloads, inventories, transfers, exchanges and sales." At the factory, SGTIN RFID tags are printed according to production order, and then the production order is finalized via the RFID portal. At the distribution center, orders are scanned via the RFID portal, providing improved revenue and truck boarding verification.

R2A adopted the standardization of GTIN per iTag's recommendation, so that the EAN13 numbers would stand out on invoices. "We took advantage of this need," Izídio says, "and we have already evolved the project to use RFID." The EPC Gen 2 standard is employed by the iTag iPrint middleware, which checks the quantity of production order items and triggers the Zebra printer to produce labels that comply with the GS1 standard. Because the system is compatible with most ERP systems, Gambim notes, deployment has become less complex. 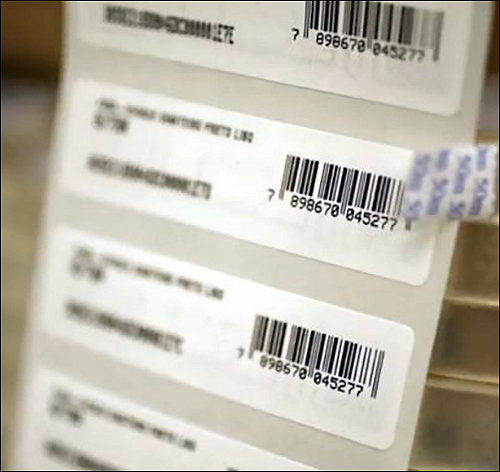 "Our next step," Izídio states, "is to tailor the project to use the SSCC label for logistics control of the pallets we move between our branches. We will make the most of this opportunity to standardize and evolve with the information we can give our customers." Among the learning points, R2A says that during a forthcoming bulk-tagging effort, it plans to better divide sectors and individuals for tagging purposes. "We are already working toward correction and continuous improvement," he adds.

The next steps include updating the label layout by adding a Datamatrix with a GTIN number and an RFID serial number, in order to offer customers the ability to use labels in their logistics processes. "We are validating an integration between APIs," Izídio says, "enabling customers to order the products that were shipped on the truck by invoice number, and thus validate the products and the RFID codes being forwarded." R2A is also engaged in the commercialization of bumpers for automakers and other customers whose vehicles are foreign or equipped with imported parts.