RFID Is as Important as Computers

Many companies have failed to grasp just how transformational the technology is.

May 26, 2019The radio frequency identification industry has not done a good job of communicating how important RFID technology is to the future of business. The reason, I believe, is that RFID can do many things, both large and small, and so companies focus on selling products and applications for specific industries (which is the right approach for growing their business). The press and technology analysts haven't grasped the technology's importance, so there is no one trying to communicate the larger vision. Let me take a shot at it.

RFID has the potential to be almost as transformational for companies as computers and the Internet. In fact, I look at RFID as the third leg of the stool that enables a firm to become fully digital and truly able to compete in the decades ahead.

That might sound like a bold statement, so I will explain. Computers digitized many of the manual tasks that office workers were doing with paper and pencil, typewriter and perhaps a calculator—or, before the latter existed, an adding machine. (Most readers are probably not old enough to remember adding machines, so I've posted an image of one very similar to the model my father used, which I played with as a kid.) 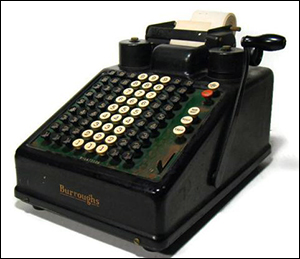 Instead of generating data, writing it on paper and passing it to someone else, who would then copy down the relevant information and enter it into a new spreadsheet or report, computers enabled companies to generate a lot of data, manipulate it easily and share it with colleagues. This led to dramatic increases in productivity since the data didn't need to be reentered time and time again, and because it could be manipulated and shared in ways never before possible.

The Internet connected most of the world's computers and enabled the vast amounts of information stored in them to be shared with anyone who had the proper authority to access it. This didn't lead to big gains in productivity—workers did not produce more within the same amount of time—but it was transformational in that it allowed anyone in the world to conduct business with anyone else. It spend up research that previously took a great deal of time to complete, and it allowed companies to share information with customers, supply chain partners and others outside their business.

But there remains one area of business largely untouched by computers and the Internet, and that is the physical aspects of a business. Factories and supply chains operate in much the same way they did 20 or 30 years ago. IBM's Watson can read 800 million pages of data per second, but Watson can't tell a company where a specific tool is located at a particular moment in time, or how many shirts are on a given shelf or where a finished item is in inventory.

I believe RFID is the foundation for true digital transformation because it provides a vast majority of data about what's happening in the real world (video analytics and powered sensors play a role as well). RFID allows a company to identify and locate virtually every physical asset it owns, from a file with new product designs to an aircraft engine. Once these items can be located and tracked, they can be managed far more effectively. It is the equivalent of evolving from accounting with pencil and paper to using a computer.

Mark Roberti is the founder and editor of RFID Journal.