Supplier City Solutions' system is designed to help workers easily identify which bins require replenishing, thereby ensuring that no parts run out when needed on the production floor.

Feb 24, 2016Tracking small parts used in aircraft manufacturing is a task that requires effort on the part of both suppliers and manufacturers to ensure that those items, such as fasteners or bolts, never run out when needed. At some factories, parts suppliers dispatch personnel to determine what is in stock, while some aircraft manufacturers have their own employees perform an inventory count. In either case, the process is typically carried out visually, sometimes in conjunction with bar-code scans, though that can be time-consuming and could potentially lead to errors.

Supplier City Solutions (SCS), a technology company based in Ft. Lauderdale, Fla., has developed an RFID-based alternative. The company has been providing supply chain software solutions to businesses in the aerospace industry—both manufacturers and suppliers—for the past 30 years, and some of its solutions involve using a bar-code scanner to monitor which small parts are used. That information not only ensures that parts do not run out, but also helps a company link an item's lot and batch numbers with the particular aircraft being built. Last year, SCS added RFID technology to its solutions to automate the process of collecting supply chain information. Since then, both aerospace companies and their suppliers have begun utilizing the technology to automate the collection of data regarding part use at factories. 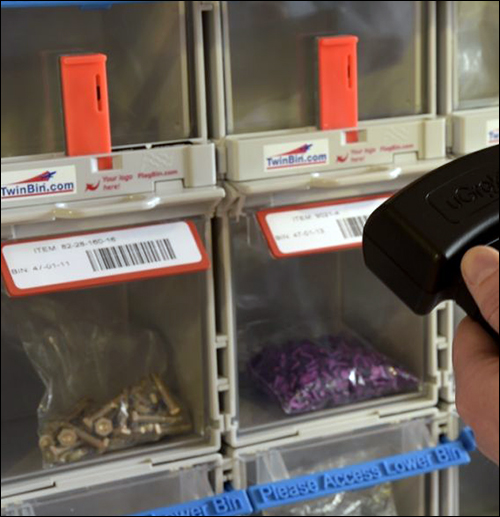 With the TwinBin system, when the bottom receptacle is emptied, a red flag indicator pops up and an RF-blocking shield is raised so that an individual assigned to conduct a parts inventory check can read the RFID tag.

SCS is also selling an RFID-based version of the system for tracking liquids stored in containers, such as liquid adhesives. By reading the containers' tags, users can not only verify what is located in a specific cabinet, but also ascertain whether those items are soon scheduled to reach their expiration dates. Supplier City Solutions focuses on offering a low-cost alternative to other RFID systems that might require a fixed infrastructure of readers and an investment in integrated software, says Jim Grason, the company's CEO and cofounder.

Once the receptacle on the bottom is empty, the top one opens automatically, dropping a second batch of parts into that bin. At the same time, a notification must be sent to identify that the top TwinBin dispenser is ready to be refilled. To accomplish this, each bin comes with two passive ultrahigh-frequency (UHF) EPC Gen 2 RFID tags. One is a shielded Alien Technology Squiggle tag incorporated into a visual replenishment flag indicator (the flag is designed to get the attention of individuals counting inventory). Once nothing remains in the bottom receptacle, the spring latch is released, causing a flag indicator to pop up and the shield to be raised, so that the tag can be read by an individual assigned to conduct a parts inventory check. The unique ID number encoded to that tag is linked to that receptacle, enabling users to know which part needs to be replenished, as well as its location.

Some potential end users have expressed reservations about using radio frequency identification, Grason reports. With a bar-code-based system, a worker must inspect and scan every bin's bar-code label before inputting data indicating whether the parts stored within that bin require replenishment. In this way, a factory manager knows that every bin has been inspected. However, end users had no way to determine whether a bin's tag had not been interrogated, either because the bin still had parts in it (and, thus, its tag remained shielded) or because the worker had skipped that bin (accidentally or deliberately) and did not try to read its tag.

"The problems with passive RFID tags are limited reading range and determining if all tags have been read," Grason states. "Our technology, in conjunction with our use of RFID-enabled visual indicators, including the Twinbin system, allows us to overcome [that issue]." SCS and Hurst Green Plastics have solved this problem, he says, by installing a second Squiggle tag approximately 3 inches from the shielded tag on the bin. That tag's ID is stored in SCS' software so that the system can expect a worker to read that tag every time a parts inventory check is performed, and will know for certain that a particular bin was properly checked, even if the reader fails to capture the shielded tag's ID number. 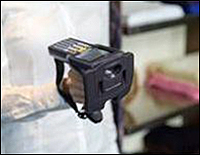 A worker uses a Zebra MC3190-Z handheld reader to identify which bins need to be replenished with parts.

To check the bins, an individual takes an MC3190-Z handheld and presses a prompt that causes the TracerPlus software running on the unit to synchronize with the SCS database The reader then loads the most recent production floor information via its Wi-Fi connection, in order to access data about the bins in that facility from the SCS software on its cloud-based server.

The user then walks past the bins, collecting tag ID numbers. The TracerPlus software receives that data and identifies if any bin was missed, in which case it displays an alert instructing the individual to circle back to capture the overlooked bin read. If the shielded tag is read, the software knows that the bin associated with that tag needs to have its items replenished. At the end of the day, TracerPlus software sends a notice to the manufacturer's or supplier's authorized parties, identifying what needs to be restocked.

SCS also offers an RFID-based solution for tracking containers filled with chemicals, adhesives or other liquids. In this case, a butterfly-shaped piece of plastic with an embedded Alien ALN-9629-FR Square RFID tag is applied to each container so that the tag is not affixed directly to the container's metal surface (attaching the tag directly to metal would detune the tag and diminish its read range). Individuals could then simply walk past cabinets in which the containers were stored, reading the tags, and thereby enabling the system to determine if any containers were missing.

The system can automatically identify which lot and batch numbers of small parts or liquids were used in the manufacture of an aircraft, since it knows when the bin or container was replenished. The user can then correlate that information with the aircraft or part being built.

With the systems, SCS sells the customer the handheld reader and RFID tags, charging a monthly access fee for software. If a customer wants the technology to be integrated with its own management software, Grason says, it can buy the software for use in house as well.

The companies currently using the RFID system have asked not to be named, Grason says. Most have been doing so for six months or less, he notes, but have thus far found that it reduced the amount of labor time workers previously spent manually checking parts levels in bins or bags. More important, however, is the prevention of any delays in manufacturing due to an out-of-stock problem with a part. Because the companies now have greater visibility into when bins need to be refilled, they have also been able to adjust the amount of parts and materials they store onsite as required for manufacturing.

In addition, the company is currently in discussions with potential customers in the health-care industry to use the RFID-enabled bins for tracking items used in patient care.