ElectroCore has developed an RFID-based method to control the dispensing of vagus nerve stimulation treatment to help those with cluster headaches or migraines relieve their pain.

Sep 19, 2018Neuromodulation technology company electroCore has released a non-invasive vagus nerve stimulator that employs radio frequency identification technology to prompt the operation of the device according to the needs of a specific patient. The portable device, known as gammaCore Sapphire, provides adult patients to treat acute pain from migraines or cluster headaches within their own home, without requiring medication. It comes with an RFID reader that interrogates passive RFID tags built into prescribed refill cards.

Passive HF RFID enables a user to receive a prescription for stimulation treatments, which is transmitted to the device itself so that it can provide the prescribed number of uses. The New Jersey company designed gammaCore Sapphire to deliver gentle stimulation when placed on a patient's neck, stimulating the vagus nerve without requiring surgical procedures. It can be prescribed to allow treatments—up to 24 stimulations each day—for up to a month. 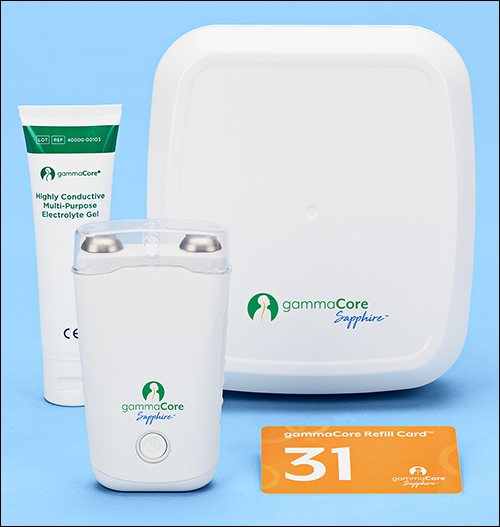 GammaCore Sapphire allows adult patients to treat headache pain at home without the need for medication.

ElectroCore was launched in 2005 to provide neuromodulation therapy for patients suffering from a variety of conditions. The first proof-of-concept, carried out in 2006, found that nerve stimulation could benefit patients in multiple ways, the company reports, such as treating asthma or epilepsy. In 2011, the firm gained approval to market its product for headache treatment in Europe. ElectroCore conducted a controlled randomized clinical trial for cluster headache treatment in 2014, then received FDA clearance to provide the device for treating episodic cluster headaches in the United States. The FDA greenlighted the device for migraine headache treatment this year.

Cluster headaches are short, extremely painful events, while migraines are relatively less painful but are much more common. Approximately 40 million people suffer from migraines in the United States. More than half of episodic cluster headache patients who tested gammaCore found their headaches went away or were significantly reduced.

Most of those with recurring headaches treat their pain with over-the-counter medications. GammaCoreoffers a non-invasive, drug-free alternative, says Dan Duhart, electroCore's chief commercial officer. The company sells its product through insurance companies and health-care providers. Since the unit was released in July 2018, he adds, approximately 8,000 patients have been using the system. "The FDA clearance allows up to six uses per day," he states.

The gammaCore VNS Therapy device, which is about the size of a cell phone, operates based on approval provided through prescribed refill cards. That feature ensures that patients pay for treatments, and also prevents them from overusing the device. As with medications, users must receive prescriptions from a doctor to utilize the therapy a specific number of times per week or month. First, a patient receives the device with a built-in 30-day trial. During that trial period, the company indicates, about six out of 10 users report receiving significant benefits. They can then purchase additional months of therapy or return the unit.

One company that is working with electroCore to distribute the services is Asembia, which sells specialty medications and treatments (see RFID Tracks Specialty Drugs Through Pharmaceutical Network). If a patient wants to purchase a refill card for more treatments, Asembia (or another participating pharmacy) can take an order for a specific number of doses. The company can use eletctroCore's software to input data about the patient and link that information with the unique ID number of an RFID-enabled card, which is then sent to the patient.

While preparing to use the gammaCore therapy device, a patient taps the card above a 13.56 MHz RFID reader, compliant with the ISO 15693 standard, that is built into the device. The reader captures the tag's ID number, which corresponds with the setting for the unit's reuse, including a specific number of uses per day, in the device's firmware, according to Steve Mendez, electroCore's chief technical officer. From that point forward, as a patient turns the unit on, an LED screen displays the time and date, along with the number of doses allowed for that day. If the unit has not yet reached its maximum number of uses, it allows the patient to activate the stimulation function.

According to Mendez, the company considered a variety of technology options to deliver the number of dosages permitted to patients. Optical (QR code)-based technology wouldn't fit the durability requirements for the unit, he explains, since the device must be able to withstand water and vibration and must have no opening components. Insurance companies prefer the RFID refill card to a Near Field Communication (NFC) or Bluetooth solution through mobile phones, because there is a concrete delivery-control system based on a card, rather than instructions being transmitted via the Internet or an app.

ElectroCore has a provider for its HF RFID technology built into the stimulator and tags for the cards. However, Mendez says, it has declined to name the company. The firm plans to continue ways in which technology can improve the management of the treatment delivery methods. "This is just the beginning for us," he states.