Nov 26, 2013Hundreds of canoes and kayaks racing at this year's Canoe Marathon World Championships, held in Copenhagen, Denmark, in September, were tracked via radio frequency identification, enabling spectators to know each participant's location and position throughout the race, whether or not the boats were in view. System provider LearningWell is currently marketing the solution, dubbed ViewLaps, for not only water sports but also motorcycle and foot races, as well as dogsled competitions.

During the three-day event, sanctioned by the International Canoe Federation (ICF), each participant placed an RFID tag on his or her canoe or kayak, and that tag was then read at key locations in the lake on which they competed. The collected read data was forwarded to Learning Well's software, which linked that information to a video feed of a particular competitor in action at the time the read was taken. The system then displayed that video, along with the competitor's name and speed statistics, on a monitor mounted on the shore's viewing area. 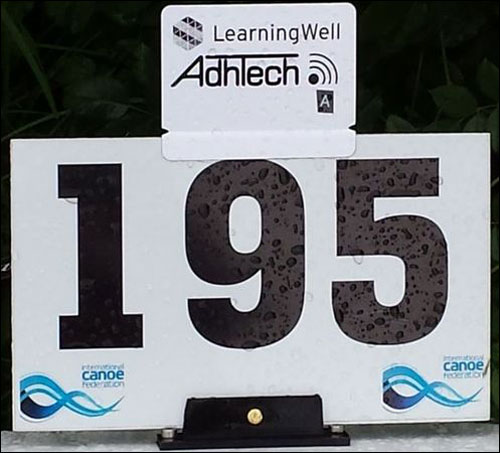 A laminated Scirocco UHF tag was attached to the ID plate of each participant's watercraft.

Learning Well is an IT company employing approximately 60 workers throughout Sweden. In 2007, the firm assembled a team of consultants specifically for RFID-based projects, including one for the Swedish Transport Administration (known as Trafikverket) involving the deployment of 600 RFID readers (see Swedish Transport Gets on Track With RFID). The idea of an RFID system to track racing canoes originated with one of the company's employees, an ICF competitor. For spectators, a canoe race can be difficult to observe, since competitors remain out of view for the majority of the event. Typically, participants paddle their crafts across lakes, sometimes disembarking and carrying the boats to another location in order to relaunch. Only when they are close to shore can spectators actually see the competitors and view how well each is doing compared with other racers.

The LearningWell RFID group—led by Mats Persson, the managing director of the company's southern Sweden office—wondered if the technology might help track participants' progress and provide information to those viewing the race from the shore. The group met with the ICF this past spring and agreed to provide the solution for the World Championships, which were scheduled for Sept. 20-22.

The challenge, according to Gunnar Ivansson, LearningWell's senior RFID advisor, was that while passive ultrahigh-frequency (UHF) RFID tags would be affordable and offer a sufficient read range to transmit data to a reader located 10 meters (33 feet) or more away, they could be compromised by the presence of water. Ivansson declines to explain how this problem was overcome, but says the issue resulted from an arrangement by which Persson's group installed the reader antenna as high above the water as possible, while some other reconfigurations were performed to improve tag-reader transmission. There was no time to conduct formal trials prior to the races, he explains, so the system was installed without significant testing being completed.

Prior to the event, each competitor was issued an ID plate—a 6-inch-tall plastic sign printed with a serial number and mounted atop the craft—for the purpose of identifying that individual during the race. In addition, every participant was given a passive EPC Gen 2 RFID tag (also encoded with a unique ID number) to attach to the top of the plate. LearningWell stored the tag's ID on its own software and server, and linked that data with the athlete's name and country of origin, as well as other information imported from the ICF's software.

The tag consists of a Scirocco UHF inlay with a laminate applied to protect it from water. LearningWell's name was then printed on the front of the tag, which the participant then attached via an adhesive.

The race itself is typically about 10 kilometers (6.2 miles) in total length, and participants may loop around and across the lake several times. Therefore, LearningWell installed two Scirocco R610 readers in the middle of the lake (on boats that all participants passed within a few meters of), as well as a third reader at a midway point (at which competitors leave the water and carry their kayaks to another launching point), and a fourth on shore (at the finish line). 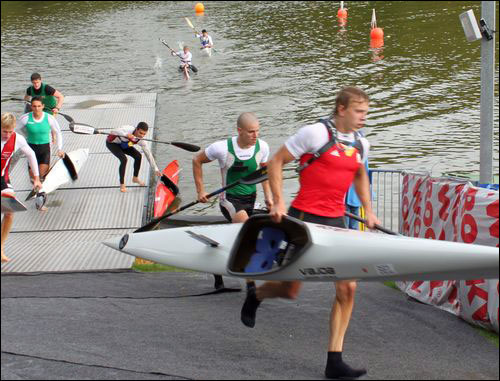 For the Canoe Marathon World Championships, LearningWell installed an RFID reader—visible in the upper right corner—at the point at which competitors left the water and carried their kayaks to another launching point.

Video cameras, mounted next to each reader, constantly recorded the action. When an interrogator captured the tag ID number of a passing canoe, it forwarded that data via a Wi-Fi connection to the server, where LearningWell's software determined the identity of the canoe's occupant, calculating his or her time and order in the race. That information—along with all of the video footage recorded at the time that the reader was interrogating the tag—was then displayed on a video monitor installed where spectators gathered, standing on the shore or sitting on bleachers, near the finishing line.

In that way, viewers could receive updates about their friends or family members, and watch them racing onscreen. "I was really happy with the results," Ivansson states. "We got a lot of good comments," he says, not only from the ICF, but also from Olympic committee members viewing the races. At one point, Ivansson recalls, he was sitting in the control tower when an ICF official arrived to report that the system must not have been working properly since it had indicated a participant who had been in 10th place was suddenly in third place. In fact, Ivansson says, the technology proved to be accurate, and the individual had, indeed, moved up seven spots in the race.

According to Ivansson, LearningWell is presently in discussion with the ICF about the system's installation at next year's races, to include a mobile application. In this case, spectators would be able to download the app from LearningWell's server and indicate the participant or participants in whom they were interested. The system would then send updates and video display directly to the appropriate viewer's smartphone, and could also alert that individual in advance when a selected competitor's canoe may be approaching the shore. What's more, he says, although the technology was not used this year for timing purposes, it could be if needed, since the times at which a competitor's tag is read could also indicate that individual's actual race time.

LearningWell is also in discussions with race organizers in a variety of sports, to utilize the technology for capturing race data and video images. This information could then be accessed by viewers or participants after the race's conclusion.