A UHF RFID system from Cadan and RFID Global by Softwork enables employees to automatically collect lunch orders as children arrive at schools in the city of Casamassima.

Jul 10, 2015Five public schools in Casamassima, a city in Italy's Apulia region, are using a radio frequency identification solution to identify children as they arrive, and to automate the ordering and payment of each child's lunch. Since the system was taken live in fall 2013, the technology has reduced the amount of labor for school personnel, ensured that food isn't wasted due to over-ordering and enabled parents to make lunch payments online.

The system consists of a passive ultrahigh-frequency (UHF) RFID tag attached to each student's backpack, a reader portal installed at each school's entrance, and software to manage the collected read data, issue alerts and make payment deductions for every meal. The solution is provided by systems integrator Cadan, using RFID hardware supplied by RFID Global by Softwork. 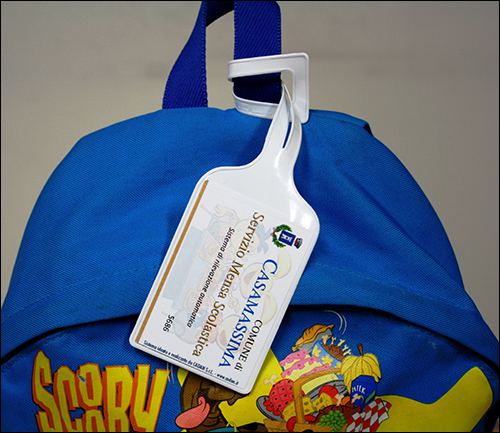 A passive UHF RFID tag, made with an Alien Technology Higgs3 chip, is attached to each student's backpack.

Casamassima has a population of approximately 19,000 people, with about 1,000 students (ages six to 10) attending the city's five primary schools. Traditionally, the students paid for meals using paper food stamps purchased by their parents at the municipal office, which the children then carried to school. A student handed a single food stamp over for each meal received at the cafeteria.

That process, however, was time-consuming for school personnel, who had to take the stamps from students and count them. If any question arose regarding whether a child was eligible for a meal (for instance, if he claimed to have lost his food stamp), the school opted to simply provide him with food. In addition, because the schools didn't know exactly how many lunch-buying students were present on a given day, they often purchased excess food, which was then discarded.

The district, therefore, sought an automated system that would not only eliminate the need for paper stamps and the handling of those stamps, but also enable each school to purchase the exact quantity of meals required on a particular day from its food caterer. The schools also wanted a solution that would be easier for parents, enabling them to make purchases online and view when they would need to order additional digital food stamps.

"The main shortcoming of a manual food stamp system," says Carmelo Tommasi, Cadan's technical director, "was the lack of management supervision about expenditures in order to receive reimbursement." In other words, the schools simply didn't know how many students would be purchasing a lunch each day. And if there was doubt about whether a student was entitled to receive a meal, the school provided lunch even if that child's parents might not have paid for it, which cost the district money.

The district approached Cadan with the problem, and the company provided a software solution known as Kubos to manage the lunch-payment data, while also installing RFID readers to automatically identify students. Initial testing took place in Cadan's own test laboratory in early 2013, and the solution was taken live in September of the same year.

At the entrance to each school, RFID Global installed a Feig Electronics ID ISC.LRU3000 long-range reader, connected to two Feig ISC.ANT.U270/270-EU antennas, according to Paola Visentin, the company's marketing and communication manager. RFID badges containing Alien Technology Higgs3 UHF RFID chips were attached to the top of students' backpacks. Each RFID tag's unique ID number is linked in the Kubos system with the corresponding child's name and payment status, as well as any special diet requirements or allergies.

When students arrive at school each morning, the reader at the building's entrance captures each child's backpack tag ID and forwards that data to the Kubos software residing on the school's database, via a Wi-Fi connection. The software identifies how many students will require each type of meal (based on diet requirements), and places that order with the caterer. It also automatically deducts the lunch cost from each child's account. The catering company can then prepare the exact number of meals required for that day.

During the early phase of the installation, Visentin reports, about 99 percent of the students could be identified while walking through the RFID portals. Families of the 1 percent of students not being identified were instructed about how to adjust the badge's location, and children were advised to keep their hands or arms off the badges as they passed through the portal, and to not hold bags low to the ground.

Since the system went live, Tommasi says, the district has saved money previously spent to print food stamps for the 120,000 meals served annually. By eliminating the need for cafeteria workers to take the paper food stamps from children, as well as count, verify and manage them, the schools have reduced the labor required for the meal-purchasing process by 97 percent.

The return on investment to date is about 27 percent, the district has reported to Tommasi, based on the reduced labor, food waste and paper printing costs. "There are also other intangible benefits generated by the technology innovation," he adds, such as making lunch pre-payments easier for parents, and eliminating queues at the municipal office where parents waited their turn to purchase food stamps.

Casamassima's future plans, Tommasi notes, are to expand the RFID solution to about 15 more schools within the district, such as secondary schools. The system can also be integrated with attendance software that stores each school's daily attendance records. The schools are not using the system this way at present, Visentin says, but may opt to do so this coming fall.