Understory's Atmosphere solution, consisting of wireless weather and air-quality sensors, as well as cloud-based software and apps, is being tested in Dallas, with 10 other cities expected to have the technology in place by the end of this year.

Feb 19, 2019Technology company Understory is demonstrating its Internet of Things (IoT)-based solution to track air quality in Dallas, Texas, with plans to deploy the technology across approximately 10 other cities this year. The solution, known as Atmosphere, has been gathering data in Dallas for two months, linking air-quality measurements with weather patterns, down to a very specific area of the city. With that information, the company explains, a city can view what causes air-quality changes, from the passing of an aircraft to localized traffic congestion and wind patterns, then share that data with its residents. The cloud-based software can also provide recommended remediation steps to improve air quality.

The Wisconsin-based company was launched about six years ago by Alex Kubicek, now Understory's CEO, to provide automated, localized weather-pattern data. However, the firm found shortcomings in the data being collected through traditional methods. Most technologies, such as radar and satellite networks, look at the sky, he says. That left Understory short on the kind of data required for significant, actionable data. Without information regarding the conditions closer to the ground, Kubicek explains, "For localized system impact, you're operating in the dark." 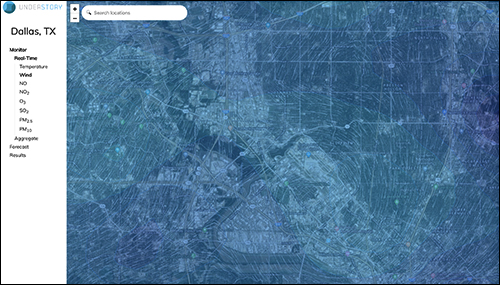 The system enables cities to view what causes air-quality changes, such as wind patterns, and to share that data with residents.

The Atmosphere system, therefore, aims to provide highly granular weather data, down to small zones within a city, that can be accessed via its cloud-based software or an app. The solution consists of wireless sensor nodes that measure atmospheric force, monitoring such conditions as hail, rain drops and wind. The company provides that on-the-ground weather data to insurance companies and other customers, to help them understand when there may be damage in specific areas based on heavy weather.

The firm's solar-powered, wireless device serves as a stainless-steel weather station with built-in hardware, provided by U.K. air-quality monitor technology company AQMesh. The weather-tracking system is also being used in the agricultural industry to capture weather measurements that can help businesses determine such information as when and how much to irrigate or spray crops.

Most recently, the company added the air-quality layer to the Atmosphere solution. "Air quality is incredibly dynamic," Kubicek states. "You really need to understand weather patterns pretty deeply to understand what is happening, minute by minute, on a 50- by 50-meter grid throughout the city." Thus, the latest version of Atmosphere measures and integrates data from the air-quality sensors, while also taking weather measurements.

"Now, when a city is taking action or implementing a policy around improving air quality," Kubicek says, "they can track results in real time and share with their constituents." Practically speaking, he adds, while climate change is an unmanageable challenge for a city or company, managing conditions in local areas is something cities can more easily accomplish.

The Atmosphere system was installed throughout an area of Dallas measuring 150 square kilometers (60 square miles) approximately four years ago, with 10 or 15 weather sensors deployed around the entire area. The city's emergency-management department is using the data for public-safety purposes. Two months ago, the company added air-quality sensors that measure particulate matter, nitrogen oxide, dioxide and ozone levels, as well as the presence of sulfur dioxide. A high level of particulate matter might indicate that emissions from something like a coal-fired plant have accumulated in a specific area.

Nitrogen oxide and dioxide are emissions resulting from travel, such as from automobiles and airplanes. When sunlight or temperature extremes affect a plume of nitrogen oxide or dioxide gas, Kubicek says, ozone can result, and the Atmosphere sensors detect that event. As the devices collect data, they perform edge computing, then send relevant filtered data via a cellular or other wireless network connection. The devices are solar-powered and have 30 days' worth of storage capacity. 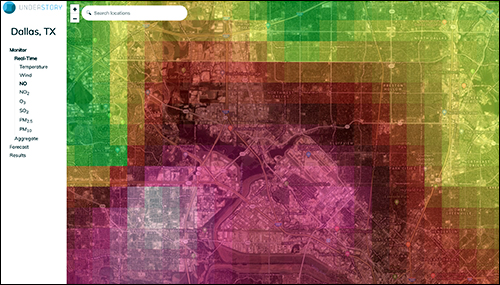 The system can show an increase in nitrogen oxide in areas where wind patterns direct the air.

The system integrates weather measurements with air-quality data to provide a picture of how such conditions may affect pollution within a small area. "By using the dynamic weather info," Kubicek says, the Atmosphere system can help cities identify sources of pollution under specific conditions, such as wind, sun or high temperatures.

Since the air-quality technology was installed in Dallas, the Atmosphere solution has enabled the company to understand how even single events can affect air quality. For instance, when an airplane takes off from an airport, the system shows an increase in nitrogen oxide in areas in which wind patterns are directing the air. "Air quality is incredibly local and shifts often," Kubicek explains, so the technology enables the city to understand that data.

To date, the company has provided its solution to commercial building owners, while cities are expected to be the target customers. At this point, Kubicek says, the technology is still being installed and tested as part of a program called Project Atmosphere, intended to demonstrate the value of the technology for cities. Those cities that adopt the technology would then use the measurements—captured, stored and analyzed on a dashboard—on a software-as-a-service basis. "We're talking to multiple cities in the United States and Europe," he adds, while Denver, Dallas, Houston, St. Louis and Kansas City already have the weather stations in place.