HeartHero's mobile automated external defibrillator, which comes with NB-IoT, GPS and Bluetooth Low Energy, provides emergency responders with alerts and location information as soon as someone opens the device and places the sensor pads on another person's chest.

Sep 20, 2021When an individual suffers sudden cardiac arrest (SCA), the opportunity for response is short. In many cases, an automated external defibrillator (AED) can save that person's life, but the technology is bulky and high enough in price that it is often unavailable when and where it's needed.  HeartHero has developed what it describes as a low-cost, commercialized AED that can be distributed by large companies to offices, be stored in indoor or outdoor public spaces, be carried by lifeguards at beaches and be used in home settings.

According to Anthony Verdeja, HeartHero's VP of strategy, the home is where the company hopes to see the most AEDs distributed. A large percentage of SCAs take place at home, he explains. HeartHero's AED comes with sensors and built-in intelligence to determine whether a shock should be administered. If so, then the device automatically administers the electric pulse. Internet of Things (IoT) functionality comes into play by sending an alert to emergency personnel and hospitals via Bluetooth Low Energy (BLE) and NB-IoT so they can respond accordingly. It uses GPS to help responders find the individual quickly, and it enables remote monitoring of the device. 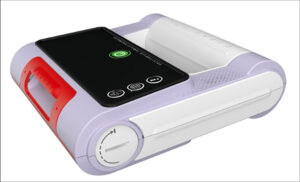 AED systems can be highly effective at saving the lives of SCA victims. In a study conducted at Japan's  Kokushikan University, an AED response system was used for runners experiencing cardiac distress during 251 races. The researchers found that of the 30 runners who underwent an SCA, 28 were successfully resuscitated using an AED device. However, Verdeja notes, time is of the essence. Typically, he adds, an AED is most effective if administered within the first few minutes.

HeartHero was founded in 2016 by CEO Gary Montague, a former CIA medical officer and Navy Scout sniper corpsman. He conceived of the technology for portable defibrillation and access to defibrillators during an international mission in 2013, Verdeja explains. After several years of development, he met with Verdeja in 2019, who had a background managing  Philips Healthcare's AED business, and the two began refining the mobile, IoT-based solution. The goal was to make a defibrillation system not only available, but easy to use for laymen.

The resulting device, which costs approximately €845 ($998), weighs 1.3 pounds and measures 6 inches by 6 inches by 1.5 inches, with an integrated handle. The unit is IP67-rated, making it dust-proof and capable of being submerged in water. A screen provides information regarding the status of the pads and battery via a graphical user interface. Thus far, it is being sold in Europe, with a North American release expected to follow.

Users of the system will download the HeartHero app on their iOS or Android device. If someone is having an SCA event, a user would open the AED hatch to release the sensor pads. Once the pads were applied to the individual's chest, the device would detect the heart rhythm and a built-in artificial intelligence (AI) algorithm would use the sensor reading to determine whether or not an electrical shock was needed. Such connectivity would provide backup support for the cardiac arrest victim and their companion. 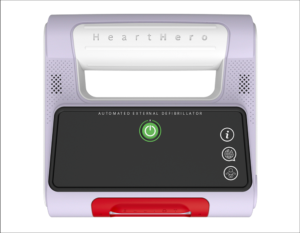 The use of the AED triggers an alert via NB-IoT. That message is forwarded over  Vodafone's cellular network and is managed by  Noonlight, a connected safety platform and mobile app designed to trigger requests for emergency services. Noonlight, which automatically alerts the appropriate emergency responders, provides a dashboard that emergency providers and others can view, that contains such information as how often the defibrillation shocks have been applied, as well as sensor readings.

As long as emergency responders have access to this data, they can find out a patient's condition and what support has already been provided. The system also provides the patient's location based on GPS data, which is specific not only to x and y coordinates, but also the z axis to indicate the altitude from which the GPS reading is being sent. That helps emergency responders in multi-story buildings, by providing the floor on which an emergency is taking place.

HeartHero employs Vodafone as its network provider because of its ubiquity worldwide, Verdeja says. The company is among the largest 5G network suppliers, he explains, enabling HeartHero to offer the system globally, including in relatively remote areas. The system has CE approval in European Union countries and is scheduled for shipment next year. FDA approval is expected to follow, with a U.S. release likely in 2022.

The NB-IoT functionality means the system not only has network access through Vodafone, Verdeja says, but can transmit its data anywhere in the world. For that reason, individuals could take the device with them to another country if they had a reason to do so. In addition, the wireless functionality enables the AED's owner to monitor maintenance issues. If a problem arose, they would use the HeartHero app to view data about the device's status.

The AED can monitor its own power level and transmit an alert if its batteries need to be replaced, or if the electrodes should be swapped out. Typically, battery replacement is necessary about every three years, whereas users should replace the pads after each use. With Bluetooth, users can access data regarding the device directly on their phone. They can also employ the app to change the device's configuration, including the language and any changes in resuscitation guidelines.

While some companies indicate plans to purchase the device for use at multiple offices or in other spaces, Verdeja says, the long-term goal is to break into the commercial home market. Once the device has been adopted by enough businesses and individuals, HeartHero hopes to begin collecting historical data via Noonlight to view how the system is being used and the results.