A Buenos Aires luxury hotel is using RFID to make sure employees always have a clean, crisp uniform ready when they show up at work.

Sep 01, 2008At the Alvear Palace, a luxury hotel located in Buenos Aires, Argentina, it's important that staff members are always polite and never out of uniform. Radio frequency identification can not help with the former, but the hotel is utilizing the technology to ensure the latter by tracking and managing the lifecycle of its employees' uniforms. 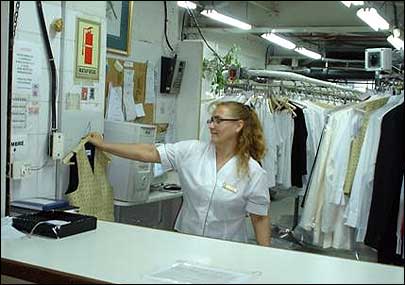 An employee uses the system to read an RFID tag (not visible) sewn into a uniform.

The occasional short supply of clean uniforms was a big issue for the hotel, Del Pino says, because many uniforms are imported from Europe and, therefore, could not be quickly replaced. What's more, employees were sometimes forced to wear ill-fitting garments while awaiting replacements for lost uniforms, which reflected poorly on the luxury hotel.

Del Pino worked with the hotel to attach a small RFID tag—an I-Code tag, manufactured by Sokymat—to every jacket, shirt, pair of pants and other article of clothing in its uniform inventory. At the beginning of a shift, an employee reports to a uniform depot and is issued a set of garments making up that person's uniform. The I-Code tag attached to each garment is read using a desktop RFID interrogator, which captures the IDs encoded to the tags and transmits them to a database, where each tag ID is associated with the ID number of the employee receiving that garment.

At the end of the shift, the employee returns the full uniform to the hotel's uniform drop, within the depot. There, the pieces are sorted and placed next to another RFID reader. The tags are read before the garments are sorted, then sent to the appropriate laundry or dry-cleaning service in the hotel, and the software checks each garment back into inventory.


Before deploying the RFID system, the hotel would simply sew a label into each garment with the name of the employee to whom it had been issued. The agent checking in uniforms would then read the label and manually log in the return.

The system was subject to errors, however, and there was no means of alerting the staff if an employee's garments were not turned in at the end of a shift. With the new, automated system, alerts are sent to hotel workers when garments are not checked in.

In addition, the manual system did not allow the hotel to easily gather data on the number of washes to which each individual garment had been exposed during its lifetime, since the uniforms were not issued unique ID numbers. With the RFID-based system, however, the hotel has deployed software that tracks the number of washings or dry cleanings in each individual outfit's lifecycle, then sends alerts to hotel staff members when a specific uniform has been washed a pre-determined number of times. The workers then remove the garments from inventory and replace them with new ones, in order to ensure that no uniforms become thread-bear.

"The control is much better now," Menendez says, though she acknowledges that it took employees a while to trust the new system. Some, she notes, were concerned that the hotel was using the RFID tags to track their movements throughout the building, and to monitor how much time they spent on various tasks.

But the system is not designed for that purpose, Menendez asserts, nor could it be used thus, given that there are only two RFID readers in the hotel, both located within the depot. "We worked with the human resources department and posted signs explaining how the tags are used," she states. This, she adds, has quelled employee concerns.