At a recent GS1 event, HP Brazil's success story with its Exceler8 platform was presented as an example of the real business benefits resulting from RFID.

Aug 27, 2017Hewlett-Packard Brazil's success story with its Exceler8 platform was presented at the recent IoT and Industry 4.0 International Seminar in São Paulo, as a practical example of how concepts such as the Internet of Things (IoT) and Industry 4.0 are being employed in that country and throughout the world. In addition to the company's plant in Sorocaba, other opportunities discussed for Brazil included an IoT plan currently being prepared by the Ministry of Science, Technology, Innovations and Communications (MCTIC), as well as private-sector initiatives for the areas of health care and manufacturing.

The HP case has been a pioneer in the worldwide IoT concept, thanks to the use of radio frequency identification technology, for more than a decade—initially in its line of printer production. Starting in 2004, the company's plant deployed solutions that have now been classified in the concept known as Industry 4.0, which is one of the aspects of the Internet of Things. 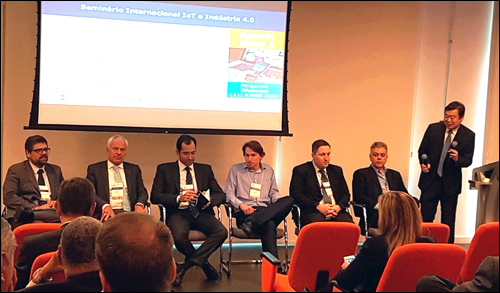 "In 2008, due to the innovation brought about by the use of RFID in HP assembly lines in Sorocaba, we already faced significant challenges, such as the production of a large mass of data," says Rafael Rapp, HP Brazil's operations manager and a speaker at the event. "We call it big data."

Rapp explained the evolution of the company's manufacturing processes that have helped it to arrive at a circular-economy model. With this model, HP Brazil can replace its production line for new equipment with materials recycled from printers and discarded ink cartridges.

"We are currently starting the serialization of ink cartridges manufactured in our assembly line with RFID, with two cartridges produced per second," Rapp says. "This process will be a pioneer for HP Brazil, but also for the rest of the world, since no other factory in the company does this yet, anywhere else." The factory has received several international awards for excellence, including recognition at this year's RFID Journal Awards, held at RFID Journal LIVE! 2017.

The seminar, hosted by GS1 Brasil, brought together experts and authorities from within and outside Brazil regarding the achievements and business opportunities that emerge in the market, along with the concepts of Internet of Things and Industry 4.0.

In addition to HP's Rafael Rapp, other speakers participated in the debates, such as Thales Marçal Vieira Netto, the general coordinator of science and technology at MCTIC; João Emílio Gonçalves, the executive manager of industrial policy at the National Confederation of Industry (CNI); Enzo Blonck, GS1's global business director; Jefferson Denti, the director of Deloitte Consulting; João Emílio Gonçalves, the director of CNI; and Élcio Britto, a researcher at Politechnic USP.

Government and National Plan of IoT
Thales Marçal Vieira Netto provided a presentation focused on Brazil's National Internet of Things Plan, with the subtitle "A strategy for the Country." The MCTIC initiative, in partnership with the National Bank for Economic and Social Development (BNDES), involves a consortium formed by McKinsey & Co., Fundação CPqD and Pereira Neto and Macedo Advogados (PNM). 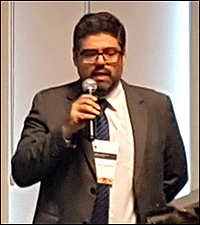 During his presentation, Netto showed that the Internet of Things generates value from data extracted from real-world sensing and could add between $50 billion and $200 billion to the Brazilian economy by 2025—approximately 10 percent of the nation's gross domestic product (GDP). The potential and challenges for the country, in MCTIC's view, are to map and address major bottlenecks, such as security and privacy, infrastructure connectivity and interoperability, human resources, innovation and financing, and institutional articulation.

In this way, the Brazilian government's aspiration with the IoT aims to accelerate its implementation as an instrument for the sustainable development of society, capable of increasing the competitiveness of the economy, strengthening productive chains and promoting improvement of the quality of life.

The verticals for the IoT application, according to Netto, are cities, vehicles, houses, rural areas, offices, factories, logistics, shops and more. For example, in issues with priority challenges, such as mobility, public safety, energy efficiency and sanitation, more than 15 smart-city experts will be involved, including representatives from Brazil's National Congress.

The event featured a workshop with more than 50 external experts from automotive segments, textiles, oil and gas, and mining, covering such applications as predictive maintenance, production optimization, augmented reality and inventory optimization. Netto also revealed challenges for the rural environment, such as health problems, infrastructure, mechanization and optimization of inputs, and for the health environment, such as chronic diseases, prevention, aging and innovation.

The development of the plan, which has four stages and is currently in its third stage, foresees as the next steps an interministerial seminar for mobilization and engagement, a second public consultation (including the refinement of the action plan), the conclusion of the study in September or October of this year, and the launch during the fourth quarter.

Summary of Other Lectures
During his presentation, GS1's Blonck offered an international perspective on Industry 4.0, reinforcing the need to use international standards, including the IoT, to ensure interoperability in the supply chain. He commented that the Massachusetts Institute of Technology (MIT) and GS1 are working to develop global standards, and mentioned that there are currently more than 3,000 proprietary standards, which he said is not a viable situation.

Deloitte's Denti commented that the convergence of analytics and advanced manufacturing is part of Industry 4.0, and reinforced the need for standards, especially in the use of information for behavior analysis. Focused on the health and automotive sectors, he cited the need to develop human resources—that is, to prepare professionals to make this transformation.

CNI's Gonçalves focused on Industry 4.0, advanced manufacturing, mass customization, 3D printing and additive manufacturing. His presentation gave importance to manufacturing, emphasizing that from there will come innovation. Poli USP's Britto, meanwhile, addressed his preliminary initiatives in the concept of what he called Hospital 4.0.