Users hail a vehicle via GreatCall's operator services, circumventing the need to download and use the Lyft app.

Aug 31, 2016With age comes slower reflexes, failing vision and various medical ailments. Because of these changes, many older Americans eventually stop renewing their driver's licenses—on their own volition, at the behest of family members or by the decree of the Department of Motor Vehicles. For those who live alone, losing the autonomy that comes with driving can be a very isolating experience, not to mention inconvenient.

Today, GreatCall, a California-based provider of technology and services for older adults, announced that it has partnered with ride-hailing service Lyft to launch a pilot program in which GreatCall's customers will be able to hail rides from Lyft through the assistance of GreatCall's operator service, used in conjunction with GreatCall's Jitterbug smartphone. 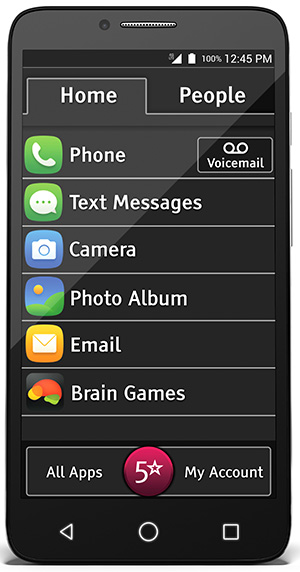 The Jitterbug phone. A flip-phone version is also available.

The Jitterbug is a basic touchscreen smartphone running an operating system that GreatCall developed specifically for older users, who are likely to be unfamiliar with such phones. It is also available in a flip-phone form factor. For both phones, the operating system uses large text and icons and includes a set of games designed specifically to improve memory.

Lyft offers an application programming interface (API) as part of its Concierge offering, and GreatCall has integrated this API into its management platform, through which it provides specific phone-based services for GreatCall customers, such as urgent-care service or reminders to refill medicine prescriptions. Thanks to this integration, GreatCall's customers will not need to download the Lyft app to their phones in order to use the ride-hailing service. Rather, they will only need to call a GreatCall operator and tell him or her where they'd like to go. The operator will then hail a Lyft driver on the caller's behalf—GreatCall is also the mobile service provider, so the operator can view the caller's location through the cellphone link.

Once the ride request is made, the operator will verbally provide all of the information that someone using the Lyft app on his or her phone would see via the app: an estimate of what the ride will cost, as well as where to wait (such as on a specific street corner, if the caller is not at home) and how long he or she will likely need to wait for the car to arrive.

Last week, ride-hailing service and Lyft rival Uber announced a program called RideWith24, through a partnership with home health-care provider 24Hr HomeCare. It also relies on operators (in this case, those working for 24Hr HomeCare) to act as intermediaries, so seniors using the service need not use a smartphone app. Many retirement communities provide transportation services for their residents, and there are some car services marketed specifically for seniors, such as SilverRide, which serves the San Francisco Bay Area. In 2014, a startup called Local Hero offered a ride-hailing service for seniors, according to a story published by FastCo. However, that company appears to no longer be operational.

David Inns, GreatCall's CEO, says his company is partnering with Lyft as a way of expanding its product offerings. "It's not about us trying to compete in the transportation world," he explains. "It's about giving more value to our consumers."

GreatCall has approximately 900,000 active customers in the United States. Between 60 and 70 percent of those customers have access to the personal operator service—a premium service for which they pay $34.99 per month, in addition to their phone subscription (rates vary based on the amount of talk time, texting and data access).

The pilot, which was launched on Aug. 22, is taking place in five areas: California, Florida, Chicago, Dallas/Fort Worth and Arizona. Lyft drivers will arrive within 10 minutes, and users can book a ride up to one week in advance. Users will be charged for each ride (fees vary based on distance and time of day, as well as the amount of demand), plus a small service fee that GreatCall charges, as part of customers' monthly GreatCall bill.

Rollout to additional markets will be announced as the pilot moves forward, Inns says.

In addition to the Jitterbug phone, GreatCall sells a number of connected-health and safety products for seniors. Last year, it purchased San Francisco-based startup Lively, which sells a smartwatch and a number of sensors designed for use in the home, aimed at enabling seniors to live independently. Inns says that GreatCall will re-introduce Lively products to the North American market later this year, as part of its own product portfolio. This will expand GreatCall's current product offerings—which, aside from the Jitterburg smartphone, includes a Bluetooth-based activity tracker and a cellular-based emergency response device.

Lively's products include motion sensors used to determine whether a family member is moving around the house as he or she normally does, and whether that person is eating and taking medicine on a regular schedule. Lively sensors communicate to a smart wristwatch via a Bluetooth connection, and the watch connects via a cellular link to cloud-based servers and an app that caregiving download to their phones.