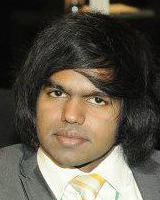 Dr. Sabesan Sithamparanathan is the founder and CEO of PervasID, a spinoff company from the University of Cambridge. He has worked on RFID since beginning his Ph.D. on passive RFID real-time sensing systems for intelligent infrastructure at Cambridge University in 2007, and was elected to a Research Fellowship at Cambridge’s Girton College in 2011. In 2014, Sabesan was awarded a Royal Academy of Engineering Enterprise Fellowship. Most recently, he was awarded the Royal Academy of Engineering Engineers Trust Young Engineer of the Year award, as well as the 2016 Sir George Macfarlane Medal for excellence.