A growing number of hospitals and surgical suppliers are employing passive RFID tags to help them monitor the inventory and usage of implantable surgical devices, as well as to manage billing.

Mar 05, 2008More and more hospitals and surgical suppliers are leveraging RFID to help track the usage, storage and inventory of surgical implants. These include knee replacement kits, neurological devices, tissue implants and other specialty surgical products.

Such tracking helps health-care organizations monitor the expiration dates of implantable devices, as well as maintain detailed device and lot data necessary in the event of a recall. The technology can also assist in tracking the implants to remain in compliance with health-care regulations such as those from the Joint Commission, requiring the documentation of patient implant histories. In addition, RFID can help ensure hospitals maintain optimum inventory levels and accurately charge patients for implants used. 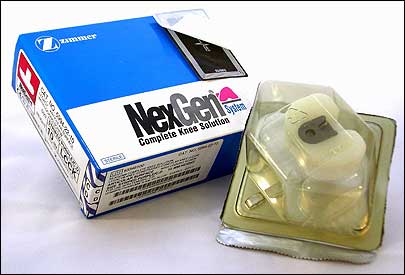 Orthopedics supplier Zimmer attaches a passive 13.56 MHz RFID tag to packaging of each implant kit it ships out.

This week, Children's Hospital Boston announced its implementation of an RFID tracking system from Mobile Aspects to help it manage and track its inventory of tissue implants and other items. The system, known as iRISupply, features RFID-enabled storage cabinets with built-in 13.56 MHz RFID interrogators compliant with the ISO 15693 standard. Hospital staff members attach passive RFID labels to the packaging of implantable devices, which are then placed in the cabinet. The interrogators scan the items' passive RFID tags, recording any that are removed from or returned to the cabinets.

In 2006, Biomet Europe began using Magellan Technology's 13.56 MHz tags and interrogators to identify items included in its orthopedic knee implant kits. Each implant kit contains around 100 parts, and the plastic packaging surrounding each part is fitted with an RFID tag (see Biomet Tags Its Orthopedic Knees).

Biomet has been using a tunnel RFID reader to ensure that kits are complete before shipping them to hospitals. When a hospital returns a kit, Biomet reads its tags to quickly determine which items have been removed so it can invoice correctly for items used and replenish the kit with the missing parts.

Magellan's RFID technology leverages phase-jitter modulation (PJM), which the Australian company created, and the tags comply with the ISO 18000 Part 3 Mode 2 air-interface protocol. "Magellan's technology is a combination of very high data rates," says Ken Laing, the company's VP of sales and business developments, "meaning that you can read and write to many tags almost simultaneously; eight separate reply frequencies that allow up to eight tags to reply at once; the ability to read and write to many hundreds of tags stacked, touching or overlapping; and tunnel readers that can identify tags in any orientation."


Zimmer is another orthopedics implant maker employing Magellan's PJM technology. The company says it uses hundreds of thousands of tags to track its products—including hip, knee, shoulder, elbow, spinal and trauma implant kits—as they're shipped to hospitals worldwide. The benefits, according to Zimmer, include more accurate inventory and invoicing, as well as faster picking, packing and shipping processes. This has led to reduced labor costs, easier tracking of returned products and a significant reduction in errors fulfilling orders.

Based in Warsaw, Ind., and operating worldwide, Zimmer reported sales of about $3.5 billion in 2006. The company first began utilizing RFID in late 2005 to track implants shipping from its five distribution centers in Australia (Sydney, Melbourne, Adelaide, Perth and Brisbane) and its center in Auckland, New Zealand. Since then, it has added the technology to its centers in Bangkok, Thailand; in Singapore; and in the Japanese cities of Gotemba, Heiwajima and Fukuoka. Overall, says Michael Schaffler, Zimmer's operations director, the firm has tagged more than 700,000 products—approximately 200,000 each year.

According to Schaffler, Zimmer decided to implement RFID largely to help it manage the complex supply chain, which he says is typical of the orthopedic industry. Most often, he notes, hospitals use consigned implants owned by the supplier but residing at the hospital, ready to be used in joint replacement or trauma surgery. In some cases, implants are loaned to a medical facility for a single surgery.

Because every patient is different, surgeons require a multitude of implant variants and sizes for each case. "In most cases, 100 to 150 implant kits are sent for each case," Schaffler says, adding that only about 3 percent of these devices are used in a particular surgery. As a result, many implant kits are shipped out and later returned to Zimmer's distribution centers.

Before Zimmer implemented RFID, each kit was bar-coded and manually scanned, which was a time-consuming, labor-intensive process. "We had a significant bottleneck in bar-code-scanning each orthopedic implant as it left a Zimmer warehouse and was then returned after each case, " Schaffler says. "Often, emergency surgery requirement did not allow for sufficient time to bar-code scan each implant as it left the Zimmer distribution center."

Instead of using bar codes to identify each kit, the company now utilizes Magellan's passive 13.56 MHz RFID tags and interrogators. A tunnel reader, fitted over a conveyor belt, automatically scans the RFID tag affixed to an individual tote containing all the kits pertinent to a customer order. Each tote's tag is associated with the product and lot number of a particular implant in a back-end database, and thus collects the tag's serial number, product number, lot number, expiration date and manufacture date.


The scan is then checked against the order—which contains a surgery requirements list—to make sure the tote contains all the correct kits, each of which has its own individual RFID tag. "Instead of individually scanning each item using a bar-code scanner," Schaffler says, "the tote can be placed in the tunnel and all the tags are identified irrespective of whether any of the tags are touching or overlapping, or the orientation of the tag." The tote is packed in a box, which is also RFID-tagged, and that unique ID number is correlated with all the individual tags on the implant kits contained in that box.

"The key benefit of using RFID is that an entire surgery order can be scanned at once and compared to a surgery requirements list," Schaffler says. "If there is a perfect match between the pick and the requirement, the box is sealed and sent. The hospital now only needs to check that all outer boxes are present, rather than having to check the content of each box. In addition, we have placed an RFID tag on the box. This enables an association between the box and its contents. This allows nursing staff to locate a particular implant and the exact box number it was delivered in."

With the bar-coding system, the bar codes on the kits contained in a shipment couldn't be scanned once the kits were packed and ready to ship, because the scans were conducted at the picking station, prior to their being placed into a tote. "We needed a system to verify that every implant required for the surgery was actually picked and packed," Schaffler says. "In this business, a picking error discovered in the operating theater when that patient is on the table is not an option."

After all the kits in a given shipment are packed, their tags are interrogated to reveal the contents, which are again checked against the order. If there's a match, the box is sealed and shipped, and the shipment is documented. "The possibility of adding the wrong products to the shipment is reduced," Schaffler states.

Once products are returned, the tags on the implant kits are read once more to determine which devices were utilized. "When the serial number is detected, the system identifies which hospital it was sent to and [records] the returned inventory," Schaffler says. "We need a reader that could cope with accurately reading a tote of implants in multiple orientations, and the reader read rate had to be fast and robust."