Best Use of RFID to Enhance a Product/Service: Kuehne + Nagel Monitors Pharmaceuticals to Improve Customer Service

The global transportation and logistics firm turns to RFID to track the location and temperature of shipments.

Jun 24, 2015Kuehne + Nagel has built a reputation as a global leader in business-to-business sea-freight, air-freight, overland and contract logistics. The 125-year-old firm, headquartered in Switzerland, has more than 63,000 employees and a presence in more than 100 countries. It serves a wide range of industries, including aerospace, automotive, industrials, high tech, oil and gas, retail, and pharmaceutical and health care.

Five years ago, Kuehne + Nagel set out to improve customer service. The company wanted to develop a system that would monitor the temperature of sensitive pharmaceutical and health-care products in transit on a near-real-time basis. "It's critical to keep the majority of medications within certain temperature ranges during transportation," says Jon Chapman, Kuehne + Nagel's global pharmaceutical product manager. "If you go outside the range, you have no guarantee the product will work effectively." 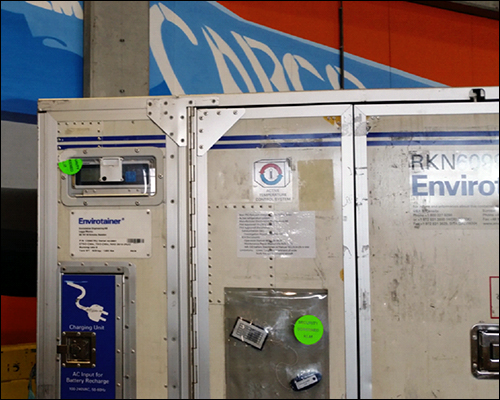 Temperature fluctuations sometimes occur during the shipping process or if the temperature-control system fails, and that information wasn't available until a shipment arrived at the destination. "Historically, pharma companies have used data loggers, and they download the data at the destination and then make a decision whether the product is fit to use and can be sold," Chapman says. "Some of the shipments travel to very warm regions that present significant challenges." Kuehne + Nagel wanted to "automate the monitoring process," he says, "to reduce the risk of a problem occurring, and make it easier to quickly identify if there was a problem."

In March 2011, Kuehne + Nagel launched KN PharmaChain—which features an active RFID solution to track and monitor shipments that travel by air and ground across continents, 24-7, in near real-time. RFID sensor tags attached to a shipment monitor and log temperature data. The data is transmitted to RFID readers as soon as a shipment arrives at a waypoint or final point in its journey. The data is transferred to Kuehne + Nagel software, which generates an alarm if an unacceptable temperature deviation occurs. That way, the CareTeam, a trained 24-7-365 monitoring and rapid response team, can take immediate action to correct the situation before the product is harmed.

Kuehne + Nagel has installed the technology globally at hundreds of points along the supply chain. Although the firm charges extra fees for the service, premium pharmaceutical and health-care companies use it regularly, Chapman says. "It's not something every company chooses to use or deploys for all products and situations," he says. "It's something that's valuable for critical shipments involving high-value products, and the partnership between our customers and our company is constantly expanding."

Developing the Solution
Five years ago, Kuehne + Nagel formed a crossfunctional team—with project managers and representatives from logistics, procurement, pharma and IT—to explore how to build an advanced logistics and tracking system using RFID and wireless communications. The team examined an array of issues, including freight flows, technology options, total cost of ownership, data standards, IT compatibility with internal and external systems, and time and cost models. Once Kuehne + Nagel defined the scope of the project, the team whittled down a long list of RFID providers to two candidates, whose solutions they tested using predetermined criteria.

Kuehne + Nagel decided to use out-of-the box active RFID hardware and software from CartaSense, a provider of monitoring solutions. The firm's U-Sensor tags identify and monitor freight shipments, and U-Sensor Gateway fixed readers are located at warehouses and other facilities along the supply chain. U-Sensor Gateway Dashboard readers manage data reception and transmission during trucking.

CartaSense's software was integrated with Kuehne + Nagel's IT systems. The software receives data packets from the RFID readers in the field and drops them into a database that includes temperature measurements, times of readings and measurement receipts, whether the tags were connected to the system at times of measurement, and reader position. If a problem with a shipment is detected, KN Login, a Web-based shipment-tracking system, displays the data and issues an alarm to the CareTeam.

Kuehne + Nagel first tested the system in a lab and then built fixed installations in a warehouse environment. The next step was a proof-of-concept test on a single logistics lane. When this demonstrated the viability of the project, Kuehne + Nagel integrated the tracking and monitoring software into KN Login, which allows customers to see where their shipments are at any given moment. Once Kuehne + Nagel staff members were trained to use the system, the firm conducted a live test with a pharmaceutical customer on a single route. "Ongoing user feedback led to a variety of changes, upgrades and enhancements," Chapman says. 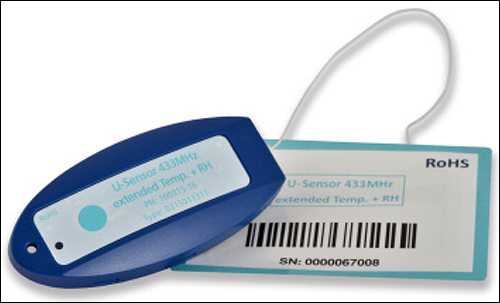 One of the more challenging issues was ensuring the recyclable RFID tags would work correctly throughout the shipment process. (Photo: Kuehne + Nagel)

The Global Rollout
Kuehne + Nagel first rolled out the solution at three locations in Europe and North America. The RFID readers were deployed at prominent locations, where they are visible but out of the way of possible forklift truck damage, and not readily accessible, to thwart tampering, Chapman notes. The company developed a layout plan, so the facility operator can identify and access equipment quickly and easily when maintenance is necessary.

Tag reads occur every 10 minutes when a shipment is within range of a reader. "The system uses a record mode when a mobile signal isn't available," Chapman says. "It ensures there are no gaps or missing data."

One of the more challenging issues was ensuring the recyclable RFID tags would work correctly throughout the shipment process, Chapman says. Customers place the tags in different locations, depending on the cargo dimensions and thermal packaging used. It took some effort to determine the optimal tag positioning.

"We developed very robust training procedures that are used by dedicated teams that focus on pharmaceutical and health-care shipments," Chapman says. The teams also receive training regarding government regulations, including U.S. Food and Drug Administration rules and procedures. Moreover, Kuehne + Nagel conducts audits at all its certified pharma locations, to ensure adherence to World Health Organization standards and quality performance.

Today, Kuehne + Nagel has regional systems experts on every continent and a toolkit that can be used to deploy the technology rapidly at an airport or other location. This makes it possible to address technical problems and other issues quickly. And because the company opted to use off-the-shelf equipment, "it's very much a plug-and-play environment," Chapman says. "It's possible to take the required hardware to a location, find a main power supply, put it in place, add it to the network and switch it on. After a few quick checks, it's fully operational." In a few cases, the company must add range expanders to ensure wireless connectivity across a facility or site. But in almost every instance, he notes, "We are up and running in less than a week."

Safety First
The RFID tracking and monitoring solution took roughly two years to reach beneficial operation," Chapman says. It is now in use with more than 20 partners. 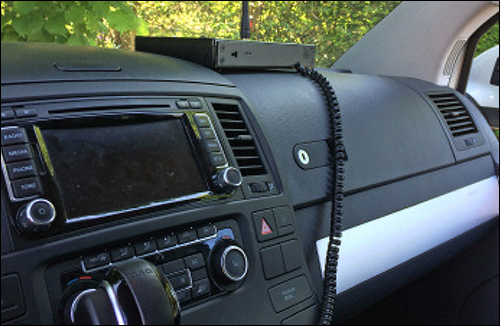 Kuehne + Nagel estimates the solution detects 90 percent of temperature deviations within 30 minutes. The company reports there have been many instances in which the solution has helped spot problems quickly, so the CareTeam could take corrective action, such as re-icing a container or replacing a defective battery, saving the pharmaceutical company from incurring six-figure losses.

Chapman points out that a typical pharmaceutical shipment can have a retail value of more than $5 million. "If something goes wrong with a shipment, the customer has to replace it, an insurance claim may be required, and it's necessary to destroy the product." Worse, he says, patients may not receive potentially lifesaving medication in a timely manner.

Kuehne + Nagel plans to continue rolling out the technology to additional locations during the coming months, and broadening the project to include all modes of transportation. System enhancements are ongoing, Chapman adds. The company, for example, plans to add sensors that measure shock and humidity, he says.

"There is an ever-increasing desire to know where a shipment is when it is in transit and the physical conditions at any given moment," Chapman says. "There is a growing expectation that this information is available at the touch of a smartphone or tablet screen. RFID and the Internet of Things are allowing Kuehne + Nagel to introduce capabilities that wouldn't have been possible only a few years ago."