The project, overseen by the USDA's Animal and Plant Health Inspection Service, will test the ability of ranchers, veterinarians, feedlot operators and slaughterhouses to use UHF tags to track animals and their health data.

Jan 07, 2015The U.S. government's Animal and Plant Health Inspection Service (APHIS) has launched a nationwide pilot of ultrahigh-frequency (UHF) RFID technology for use in tracking cattle at ranches, feedlots, auctions and slaughterhouses. The U.S. Department of Agriculture (USDA) agency began providing UHF RFID tags to pilot participants last month. APHIS' goal is to determine the feasibility of employing UHF RFID to identify cattle moving from one location to another, including the ability to read tags on multiple animals as they are loaded onto trucks or being observed by veterinarians or other individuals. The UHF technology could be an alternative to low-frequency (LF) RFID, as well as ear tags printed with ID numbers that are read visually.

The USDA is purchasing UHF ear tags, which it then provides to cattle industry members, such as producers, slaughterhouses and feedlots. Currently, the agency is buying UHF ear tags from two companies: HANA Micron America Inc., the U.S. division of Korea-headquartered semiconductor firm HANA Micron, and Y-Tex.The latter company did not respond to a request for comment. 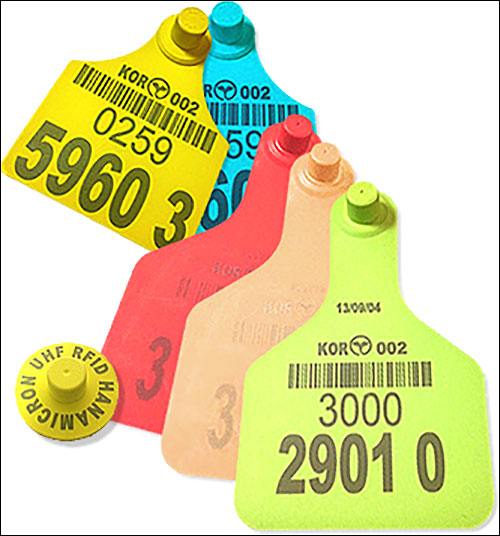 For the APHIS pilot, HANA Micron is providing its RaFID ear tags, made with its own UHF RFID inlay.

Neil Hammerschmidt, APHIS' program manager for animal disease traceability, says the agency could include other RFID vendors in the program as well, though he could not yet name them. To date, UHF RFID tags are being applied to the ears of cattle in Florida, Tennessee, Colorado, California, Hawaii, Montana, Michigan and Oklahoma. The 18-month pilot is being overseen by APHIS, with each state's animal health office managing the technology's use locally, as well as collection of the results, which will then be shared with APHIS.

The agency's goal, Hammerschmidt says, is to test the tags' durability in the real-world environment of livestock management, as well as the reliability of the tag reads as the animals move past fixed readers, or handheld units used by veterinarians and cattle industry workers. APHIS expects to have 150,000 head of cattle tagged and tracked in the program, with at least 15 producers and several slaughterhouses participating.

The USDA first approved the use of UHF RFID tags for cattle tracking in 2009, as part of its National Animal Identification System (NAIS)—a voluntary program intended to allow the tracking of animals with a 15-digit animal identification number (see USDA Approves First UHF Tag for Animal Identification System). In February 2010, however, the USDA halted the NAIS program and moved to the current animal disease traceability framework. "The new framework allows maximum flexibility for states, tribal nations and producers to work together to find traceability solutions that meet their local needs," Hammerschmidt explains. In 2012, the USDA finalized its regulations for animal disease traceability, requiring that livestock moving interstate be officially identified (unless otherwise exempt from such a requirement). The USDA's regulations for cattle crossing a state border, however, specify that ear tags be either visual only or contain a passive LF RFID inlay with each animal's official identification number printed on the front. Cattle that remain in their own state or on Native American reservation land are exempt from federal regulation.

For the federal and state animal health officials and cattle producers, the interest in passive UHF tags centers on their long read range. With UHF RFID, users and technology vendors hope the tags can be read at a much longer distance than LF, when large volumes of cattle move through wide alleyways or corrals from one area to another (such as onto or off of trucks, or from one field or building to another)—a scenario that has proved challenging for LF technology, which requires very close reads.

Another challenge for pilot participants may be in ensuring that the UHF read range is not so long that stray reads are captured. For example, accredited veterinarians may want to employ a handheld to capture a tag's ID number each time an animal is vaccinated, but would need to ensure that they interrogate only the tag of the animal being treated, and not those of others milling in the same area. 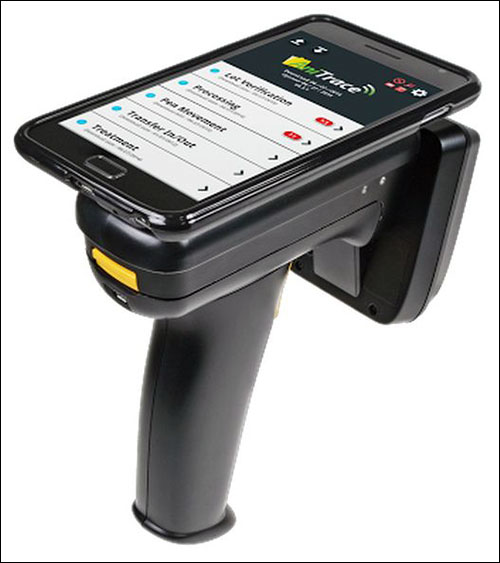 "What we're looking for," Hammerschmidt says, "is this: If you've tagged a couple thousand head of cattle, practically what did you find? What was the read accuracy? What was the performance?" For instance, he adds, were the operators able to use handheld or fixed readers to interrogate the tags 90 percent of the time, or only 70 percent?

"The outcome will be of merit by informing the industry of the feasibility we've seen from our perspective of using UHF for animal tracking," Hammerschmidt states. The pilot should serve not only to test the technology, he notes, but also to enable producers in the industry to practice using the tags and readers themselves.

For the APHIS pilot, HANA Micron is providing its RaFID ear tags, made with its own UHF RFID inlay. HANA Micron also offers a complete livestock tracking and management solution known as AniTrace, consisting of AniTrace software that can either be cloud-based or reside on local servers, as well as its own gate reader (for interrogating multiple tags on fast-moving animals) and chute reader (intended for reading and writing tags on select animals only). The company also offers the 1128 Bluetooth UHF RFID reader fromTechnology Solutions Ltd. (TSL), along with an AniTrace app for Android-based phones and tablets. In this case, users of the system can employ their phones to receive and then view RFID data collected by the reader. While the USDA has no commitment to test any company's readers or software, individual states are currently determining which vendors they want to work with in their demonstration projects.

For tags, HANA Micron won an indefinite-delivery indefinite-quantity (IDIQ) contract from the USDA, with the estimated total purchase not to exceed $6 million throughout the life of the contract. HANA Micron says it will also supply the TSL readers or its gate or chute readers directly to states if they opt to use the full AniTrace system. The company has already been selling its UHF ear tags for animal tracking within other countries. HANA Micron, based in Korea, has opened a U.S. office (HANA Micron America) to help oversee the technology's use in this country, according to James Choi, HANA Micron America's VP of system integration.

The company developed its UHF RFID ear tag over the course of several years, and launched a pilot in 2013 involving the tagging of 800,000 cattle in Brazil. HANA Micron has been interested in providing tags for animal tracking since 2008, Choi says. "The choice, at that time, was LF only. To us, that didn't make sense, efficiency-wise," he says, referring to the fact that LF RFID technology requires an individual to hold a tag within a few inches of that tag, and that the animal come to a stop. "We know what UHF can do." Therefore, the company developed passive EPC Gen 2 UHF tags for use on cattle in Brazil, and then began working with the animal health tracking agencies, as well as private cattle operators in South Korea, New Zealand and Australia. With UHF, Choi says, fewer staff members (or work hours) would be required, since they wouldn't need to stop in front of each animal to capture its ID number.

Although HANA Micron makes its own RFID readers for tracking livestock, for the U.S. market it is partnering with TSL to provide participants with the ability to collect data on their mobile phones. The TSL reader captures tag read data and forwards that information to a user's mobile phone via Bluetooth. Choi says the app can be used on Android phones or tablets, but in the future, it will be available for iOS devices as well. For the APHIS pilot, he adds, the technology will be used in three segments within the cattle industry.

For the first segment, the tags will be read at a ranch when calves are first tagged, and during vaccination and health certification, as well as for other health-care-related processes, such as weighing and feeding. During the second segment, the tags will again be interrogated as cattle are loaded and unloaded during the process of transporting the animals to feedlots via truck, as well as periodically as the cattle are fed or moved within the feedlot. For segment three, the tags would be read when animals are loaded for shipment to the slaughterhouse and, finally, at the slaughterhouse itself. The exact details regarding when the tags will be read, and for what purposes, will be the responsibility of each state's animal health office and individual operators.

In the case of the AniTrace system, data can be viewed on the app and be sent to a cloud-based server, or to a local server hosted by the feedlot, ranch or slaughterhouse's own local database. For the pilot, state animal health offices will manage the data on their own servers.

Each participant using the AniTrace solution or other UHF RFID technology will determine the system's efficiency and the ways in which it could be used, and create a report to be shared with the local animal health agency and APHIS.

APHIS then intends to consolidate the results and publish the information in a report that will be made available to the industry, free of charge.