JADAK's ThingMagic EL6e UHF reader module is designed with a built-in processor and antenna, or a port for an external antenna, and is aimed at making deployments faster and with standalone functionality, without requiring a software developers kit.

Mar 15, 2019Technology company JADAK has released a new UHF RFID reader module aimed at enabling the rapid deployment of RFID solutions without requiring RFID expertise on the part of systems integrators or users. The company's ThingMagic EL6e smart module comes with an option for a built-in antenna or an antenna port for an externally mounted antenna, as well as a built-in processor that allows it to be programmed and managed as a standalone solution, thereby eliminating the need for the software integration required for the majority of RFID deployments.

The company expects the new module to make deployments in health care and other industries simpler for original equipment manufacturers (OEMs)—such as makers of smart cabinets or kiosks, for instance—as well as systems integrators that install the RFID solutions. JADAK already offers three module families: the Nano, the Micro and Micro LTE, and the M6e. 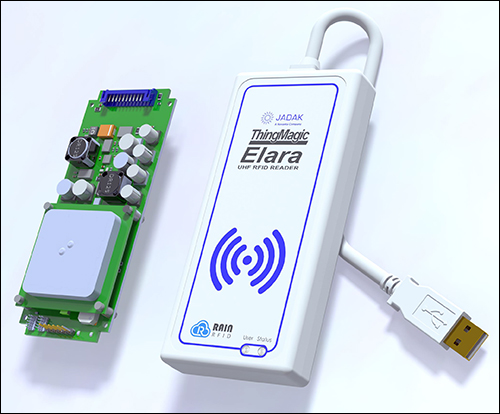 Traditionally, the firm has provided its customers with development kits to help them build solutions that could be installed and integrated at their customers' facilities, says Annika Matas, JADAK's senior product manager for RFID solutions. However, developers have been requesting an RFID reader product that would offer an all-in-one solution to not only read tags but process the captured data—one that could be programmed independently, according to the needs of a particular reader deployment.

"The feedback we tend to get from OEM companies is that they don't want to be RFID experts," Matas says. "We have served as their RFID expert, but in some circumstances, they have expressed wanting a solution that is more out of the box." The module comes with its own RFID engine, she explains, while further simplifying deployment by providing a built-in antenna or port for an external antenna, depending on a specific user's needs.

"With processing power," Matas states, "you could preset the perimeters" on each device without requiring a separate computer. Thus, OEMs could preload the requirements for read events for a specific device. Because of this ability to be independently programmed, she notes, the module supports autonomous workflows.

The new module leverages the RAIN Communication Interface (RCI) guideline for simplified reader commands, released in September 2018 (see RAIN RFID Alliance Releases Guideline for Simplified Reader Commands). The guideline was established to offer an easier way for systems integrators to control readers of any brand via a single profile command, thus eliminating the need for application programming interfaces (APIs) to allow software programs to communicate with each other.

The EL6e can be used to quickly set up a new read point when other readers are already in use, or a single new read point that is autonomous. A more traditional RFID system design journey, Matas says, typically starts with a development kit to help a developer or end user understand how an RFID reader works in a user's specific environment and application. Developers tend to rely on an SDK to make this possible, then end up designing their own interface board to plug modules into, such as antennas.

"It's a comprehensive development effort," Matas staes, adding that this approach "is still really valid for a lot of applications." But with the EL6e, developers and systems integrators do not need the developers kit or to design their own interface, and have a choice to use the built-in antenna or plug in a model of their own. "So we've eliminated a couple of steps that require engineering and design effort."

The EL6e could be deployed in a variety of industries. In health care, for instance it can be built into medical cabinets for the purpose of item check-out or verification. Manufacturers are developing cabinets or work stations for processing RFID-tagged pharmaceutical or medical device products. That same scenario could be used in the retail sector for check-in or purchasing, or at a kiosk to let customers learn more content about a tagged product.

The system could also be implemented in parking lots to open access gates, or at ski lift gates. In either scenario, each RFID-enabled gate, in a different geographic area, could have its own set of programmed instructions to provide the services required at that location. Updates could be accomplished via the USB port or serial connections, Matas reports.

The new product was released in January 2019 and is now in use by JADAK's direct OEM customers. So far, OEMs are still in the piloting and testing stages. JADAK plans to release the EL6e to channel partners in March. "We're pretty bullish that it will find a good audience," Matas says. The company also intends to release a sister product known as the ThingMagic Elara, which will come with a USB-powered reader in an enclosed housing that she says will be plug-and-play for end users.