Nov 01, 2011In early September, a select group of fans of Activision's Call of Duty video-game series enjoyed the unique opportunity to step into RFID-powered real-life re-creations of two gaming levels from the series' sixth installment. The live-action gaming was part of a two-day event designed to celebrate the launch of the series' latest release, Call of Duty: Modern Warfare 3.

For $150, fans were able to preorder tickets to the event, which took place during Labor Day weekend in Playa Vista, Calif. The tickets granted each attendee access to a number of special activities, as well as to two gaming arenas—the Pit and the Scrapyard—designed as real-life replicas of two of the virtual gaming levels featured in Call of Duty: Modern Warfare 2. An RFID system designed by Sponsor Screen Network (SSN), a provider of technology for events, enabled players to easily enter the live-action gaming area. During the games, the RFID system allowed participants to post their performance, as well as images taken of them on the course, to their Facebook pages. At the end of the event, the attendees presented their RFID wristbands to claim a gift bag included in their entry fee. 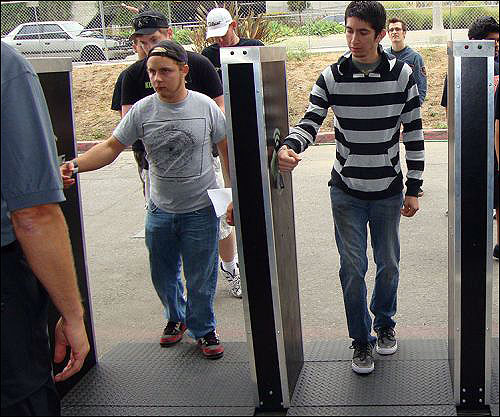 At the entrance to the gaming area, players walked through RFID reader gates to verify that each individual was a ticketholder.

"We use various tools to help streamline the event environment," says Greg Nevolo, a partner at SSN. At the Call of Duty event, RFID was used not only to identify the players and link their game experiences to their Facebook pages, but also to provide security for the gaming area—and to help Nevolo and his staff attain instant visibility into the gaming area, as well as manage resources based on the flow of player traffic. "With the RFID wristbands, we could monitor flow and throughput at various points of entry and redemption," he states, "and allocate more staff when the areas were busier."

At the registration desk, each player presented a bar-coded number that confirmed that person's pre-ordered ticket. Workers at the registration desk scanned the bar code and utilized an AIR ID Enroll desktop reader, provided by RF IDeas, to collect the unique identification number encoded to a wristband's 13.56 MHz passive RFID tag, and then fasten that band to the player's wrist. The SSN software associated the tag ID with that individual's registration information, as well as his or her Facebook profile, if the gamer chose to provide that information upon ordering the ticket (85 percent of the players did so).

The wristbands, which contained an RFID inlay compliant with the ISO 15693 standard, were provided by ID&C, based in the United Kingdom. Upon entering the gaming area (a converted airplane hangar), players would walk through RFID reader gates, which would collect each entrant's tag ID number. Software would then compare that number against the registration database. If it found a match, the player would hear an "access granted" recorded greeting, and a green LED would illuminate on the inside of the gate, where a security person was stationed. In the event that there was no match, the gamer would hear "access denied," and a red light would alert security personnel to direct that individual to a registration table within the hangar, where another employee could determine why the system did not recognize that tag ID. Such an occurrence, Nevolo says, was generally due to the database not having been updated from the registration system—an oversight easy to rectify. The gates allowed for minimal security staffing, he says, with only one security person assigned to each set of several gates, thereby allowing a throughput of up to 1,100 people per hour, per gate.


Once inside the gaming area, players checked into each arena by holding their wristbands up to readers mounted into cases, which SSN dubbed "Cubes." In the first gaming arena—the Pit—attendees competed in a timed obstacle course with a paintball gun, shooting at pneumatic pop-up targets. The second arena, known as the Scrapyard, was the site of a multiplayer paintball battle between two teams, each comprising 16 players. By presenting their wristbands to the Cubes, gamers updated the software with the their locations and scores, and a camera would capture the check-in. Cameras mounted throughout the gaming area would also snap photographs of the players, and then associate those photos with the participants currently checked into that section of the game. These images were then uploaded to the player's Facebook pages, along with that person's scores.

In addition, this information was shared with the crowds at the event, via digital leader boards. At the end of the game, every ticket purchaser received a gift bag containing a copy of Call of Duty: Modern Warfare 3. The real-time data reporting allowed additional staffing and terminals to be added at a moment's notice, in order to help reduce wait times for those waiting to receive a gift bag. In addition to speeding up the redemption process, the RFID database also prevented fraud and multiple redemption attempts, since each player's wristband tag was read upon that player's receipt of a gift band. 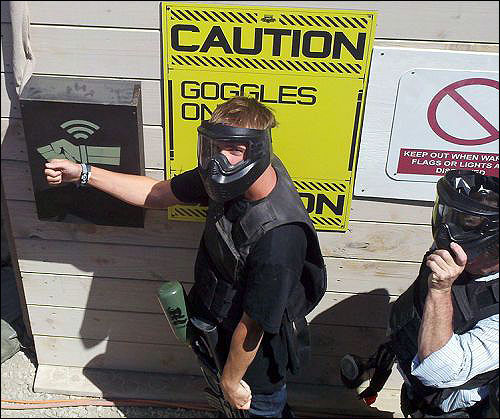 At the Pit, players logged in by presenting their RFID bracelets to an SSN Cube reader.

SSN designed and built interrogators and antennas into the security gate and Cube form factors, using high-frequency (HF) RFID readers produced by a number of manufacturers, including GAO RFID.

All ticket proceeds were provided to The Call of Duty Endowment, a nonprofit public-benefit corporation that helps U.S. soldiers transition to civilian careers after completing their military service.