After apparel, mass merchandise and department store retailers are likely to tag products in four categories, driving adoption into those areas.

Dec 01, 2011Retailers worldwide are beginning to adopt radio frequency identification—specifically, passive ultrahigh-frequency technology based on GS1's second-generation Electronic Product Code (EPC) standard—to track apparel items. That's because the industry shares a common problem no other technology has been able to solve—poor inventory accuracy, which leads to out-of-stocks and lost sales. Item-level tracking improves inventory accuracy, which in turn improves in-store replenishment, and that can lead to increased sales and higher margins.

In the United States, Wal-Mart ($432 billion in revenue) is tracking men's jeans and basics (undershirts, underwear and socks) in all of its 4,300 stores. Just these two categories account for 250 million tagged items annually. JCPenney ($18 billion) is tracking bras, jeans and shoes in all of its 1,100 stores. The retailer expects to tag all items within four years. 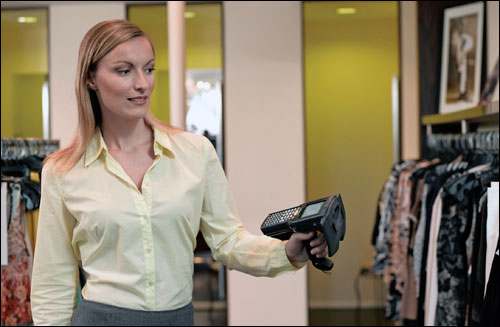 As the major U.S. apparel retailers move steadily toward tagging billions of apparel items, the rest of the apparel sector will follow suit. Photo: Motorola

Banana Republic, part of The Gap ($15 billion), has rolled out RFID to 100 stores. American Apparel ($527 million) plans to have 100 RFID-enabled stores by the end of the year. Macy's Inc. ($26 billion in revenue) plans to begin item-level tagging in its 850 Macy's and Bloomingdale's stores next year. Dillard's ($6 billion), Jones Apparel ($3.7 billion) and others have been running RFID pilots and appear close to moving forward with deployments.

As the major U.S. apparel retailers move steadily toward tagging billions of apparel items, the rest of the apparel sector will follow suit. Suppliers that tag for these retailers will, at some point, tag all their products because that's cheaper than managing tagged and untagged inventories, and this will enable all retailers to adopt RFID technology. Clearly, the apparel sector is on the path to becoming the first industry—from large department store chains to smaller specialty retailers—to move toward widespread use of RFID in the value chain—from manufacturing to point of sale.

The question is, once RFID achieves critical mass in apparel within three to five years, what happens next? How will adoption spread beyond apparel?


RFID will likely spread to sectors adjacent to apparel, where similar benefits can be achieved. To understand where retailers are likely to deploy RFID next, it's important to understand the factors driving RFID in apparel:

• Apparel is RF-friendly, so tags can be read reliably.

• Apparel inventory is complex—there are many different sizes, styles and colors of a single item, which leads to poor inventory accuracy and out-of-stocks.

• Apparel is seasonal, and subject to sharp increases and declines in demand.

• Apparel items are relatively high-value and have good margins that are eroded by markdowns.

• Shrinkage rates for apparel are among the highest of any category.

If the factors driving adoption in retail apparel exist in other product categories, those sectors are also likely to benefit from RFID. Most or all of these factors can be found in four product categories—apparel accessories, shoes, jewelry and consumer electronics—carried by mass-merchandise and department stores, so it makes sense that retailers will tag these items next. In some sectors, retailers already have deployed or are piloting RFID, often with technology solutions developed specifically for the industry. But in other sectors, the industry is still working out the standards and common practices that pave the way for widespread adoption.

Apparel accessories: Some items, such as hats and gloves, come in a variety of colors, styles and sizes, and others such as handbags may come in just one size but a multitude of styles, all contributing to inventory complexity. The challenge is to make sure a sample of each style is on display and stock is readily available.

The 2011 Global Retail Theft Barometer study, conducted by the Centre for Retail Research, found that the overall shrink rate for apparel accessories, including handbags and belts, is 1.87 percent, above the average of 1.45 percent for all products.


Many accessories, such as hats, gloves and scarves, are seasonal, so demand peaks at the start of the season and then decreases over time. Items unsold by season's end must be marked down. Most items in this category are priced at $20 and above, with many handbags, purses and other items selling for significantly more. Margins are usually 50 percent or above.

Most apparel accessories are made of cloth, leather or other materials that are easy to tag. Items with metal studs are an exception.

Given how closely related these products are to apparel, they're likely the goods retailers will focus on next in terms of RFID-tagging. Luxury handbags are often counterfeited, which means there likely will be additional value for retailers and brand owners that tag at the source of manufacturing.

Shoes: Inventory complexity is high here, too, given that there are many shoe styles and each style comes in multiple sizes. So it's no surprise shoppers often find retailers out of stock on the shoes they want.

While it is not uncommon for store employees to walk out after work wearing a new pair of shoes, leaving their worn shoes in the box, the overall shrinkage rate for shoes is 0.85 percent, below the 1.45 percent product average.

Most shoes retail for $30 or more and have a high profit margin. Shoe styles change with the seasons—new styles can become hot items and are snapped up quickly—and any items left unsold at season's end must be marked down.


Shoes are generally made of RF-friendly materials, making them easy to tag. One challenge is in deciding whether to tag the shoebox or individual shoes. Tagging the box saves money (retailers need only one tag per pair of shoes), but the wrong items can be put in a box—two left shoes, for example, or shoes of different sizes.

Some retailers are already tracking shoes. Lord & Taylor, for instance, increased sales by tracking shoe samples on display, to ensure customers can see every style it sells.

Jewelry: Inventory complexity is high. A retailer might stock many different types of diamond rings or diamond earrings, for example, all of which look very similar but might differ significantly in quality and price. Jewelry items are not replenished the way T-shirts are, but if items are not on display, they can't be sold.

The shrinkage rate for jewelry is 1.06 percent, below the 1.45 percent product average. But the value of each item can be significant, so the loss associated with jewelry theft can be high. Most jewelry items are priced at $30 and up and have high margins. Demand for jewelry spikes around holidays, such as Christmas and Valentine's Day. Items not sold during these periods are often marked down.

Jewelry can be challenging to tag, because the items are small and require special tags that must be carefully attached. What's more, when items are packed tightly together, RFID readers may miss some tags. It will also be difficult for retailers to insist on source tagging, because they buy jewelry from a wide variety of smaller sellers. But technology providers have developed display cabinets with reader antennas to track jewelry. Cleor, for example, a retail jewelry chain in France, is using RFID to track inventory in more than 60 stores.

Computers and consumer electronics: Desktops and laptop computers often come in a variety of configurations, with different central processing units, hard drives and so on. Many computer printer, digital camera and MP3 player lines have four or more different models. IHL Group, a global research and advisory firm specializing in technologies for the retail and hospitality industries, found in a 2009 study, "What's the Deal With Out-of-Stocks?" that at least one of every five customers leaves a consumer electronics store without finding the desired item. It's likely shoppers visiting the electronics departments of mass-merchandise and department stores also fail to find products they need.


Demand for hot new cell phones, MP3 players or cameras often spike quickly and then decline just as fast. The retail value of most electronics items is $50 or more, and margins are usually above 30 percent.

The shrinkage rate for computers and electronics is 0.97 percent, well below the 1.45 percent product average. But the value of each item can be significant, so the loss associated with electronics theft can be high. Moreover, theft of digital cameras, camcorders, MP3 players and other electronics is often attributed to employees.

While many of these items are metal, most come in boxes with Styrofoam protection, which separates the metal product from the RFID tag, making it easy to read the tags on these goods.

Using RFID to better manage computers and electronics might deliver the most value of any category, but the industry so far has been slow to develop standards and common practices for tagging. Some work is being done to embed RFID in circuit boards, so electronics can be tracked from the beginning of the manufacturing process through the point of sale, with the tags being used to activate the devices. While this could prove valuable to electronics manufacturers—it could thwart counterfeiting and theft—it likely would slow the use of RFID in this sector, which means retailers that want to track consumer electronics might need to tag items in their distribution centers.

Once mass-merchandise and department stores begin tagging in these four product categories, they will drive RFID adoption in these sectors.