The solution includes Bluetooth beacons and software provided by SimplyRFID, and an app from DejaView Concepts that lets people capture and then view action videos taken of them.

Jan 31, 2014Surveillance tracking technology company DejaView Concepts is bringing new meaning to the term "selfie," by releasing a new technology that enables skiers and snowboarders to pay for a service that captures videos of them during the most exciting segments of their runs, and then automatically receive that footage on their mobile phones. The solution, known as the Paparazzi Pass, takes advantage of the Bluetooth Low Energy (BLE) technology (part of the Bluetooth 4.0 standard) in a person's smartphone, to receive signals from Bluetooth beacons installed at key points along the slope, to link that individual with specific video footage.

The company has been seeking a system that would automatically pair skiers or other athletes with candid videos of them, says Hans Dietterich, DejaView's cofounder, president and COO. To that end, the firm tested passive RFID tags by placing readers at locations where digital cameras were shooting video, and providing tags to skiers and snowboarders. However, he says, the limitations became clear immediately. Passive ultrahigh-frequency (UHF) tags did not provide sufficiently precise location data to ensure that an individual was properly linked to footage captured within that zone while he or she was in the image. In addition, the company sought to make the solution available immediately, enabling users to download an app onto their smartphone and then receive data directly on their handset. While Near Field Communication (NFC) RFID technology could accomplish this goal, the company explains, it has such a short read range that it would require a phone to be tapped against another NFC device, which would be unrealistic for skiers hurtling down the slope. 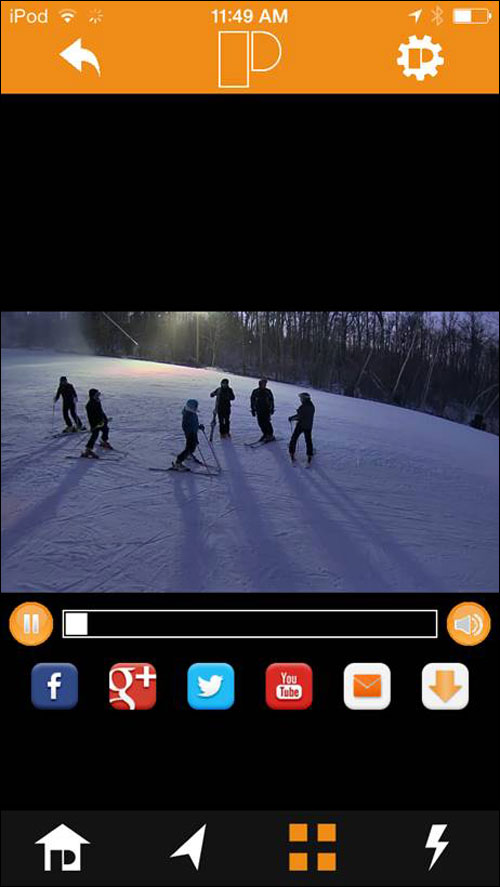 As long as a visitor is carrying a phone that is powered up and running the Paparazzi Pass app, he or she will have videos taken whenever coming within range of a Bluetooth beacon, and can then use the app to view those action shots.

Given these requirements, Dietterich says, his company opted for BLE technology, which is supported by newer iPhones, as well as most recently released Android phones. With BLE, a phone or tablet can communicate with a type of active RFID tag known as a beacon, which transmits a unique ID number via the BLE protocol across a distance of 60 feet or more.

DejaView began working with SimplyRFID to develop the Bluetooth beacons, and installed them within the video-coverage zones. It also provided the software that managed beacon data, linked an individual's phone ID information with his or her location, and forwarded that data to an app running on that handset. DejaView installed a trial version of the solution on a single slope at the Wachusett Mountain resort, consisting of two zones, each made up of about three beacons and as many cameras. A trial version of the smartphone app is currently being used, as the iOS app has not yet been available on iTunes.

Once fully deployed, the system would work this way: Individuals would arrive at the resort and be invited to download the Paparazzi Pass app in order to obtain footage of themselves as they skied, snowboarded or tubed. They must have an iPhone 4s, 5 or 5s, or an iPod Touch, running the iOS 7 operating system. During the coming months, Dietterich notes, DejaView will release a version of the app that works on BLE-enabled Android phones. Users can make a payment to the resort's ticket office, or directly on the app, to be tracked while at the location. The cost, the firm reports, will vary according to the venue, which will then share the proceeds with DejaView.

As long as a visitor is carrying a phone that is turned on and running the Paparazzi Pass app, he can be tracked every time he comes within range of a Bluetooth beacon. Employing the BLE protocol, the beacon pulses out its ID via a 2.4 GHz signal, and the phone receives that transmission and then uses a cellular connection to send its own unique identifier, along with that of the beacon, to the back-end software on DejaView's server. Using SimplyRFID software, the server links that individual with the location, time and date of the read event, pairs it with the appropriate video footage, and forwards it to the app, where an individual can then view the video on his phone. The skier can also access the footage via a computer, through the DejaView website, by supplying the proper login ID and password. The user can then utilize the smartphone app or the website to edit the video and share it on Facebook or Twitter.

Once the app is available on iTunes, DejaView and SimplyRFID intend to install approximately six additional Bluetooth beacons on another of Wachusett's slopes, after which visitors will be able to begin paying for the service. Several other ski resorts plan to install the technology for the 2014-15 ski season as well, Dietterich says. In the meantime, a water park is currently in discussions with DejaView about using the technology at its facilities, but is supplying visitors with a BLE active tag built into a wristband, thereby enabling the system to operate without mobile phones (which cannot get wet). There is an extensive list of other use cases for the technology, Dietterich adds, such as amusement parts, casinos, cruiselines, beer festivals, golf courses, and other parks and events. The system can also enable users to take posed pictures, by selecting a prompt in the app and indicating that they would like to pose for a group photograph, for example.

The solution not only raises revenue for the resort, Dietterich says, but also provides marketing benefits. "Paparazzi Pass creates brand ambassadors for the venues," he states, "since users will be sharing their videos and pictures with their friends and family via social media."