The global retailer is also eyeing ways to leverage RFID technology at its stores to further improve in-store inventory accuracy and efficiency.

May 11, 2015Global retailer Marks & Spencer (M&S) is expanding its use of EPC ultrahigh-frequency (UHF) RFID technology at most of its stores, from 80 percent of its general merchandise toward a goal of tagging 100 percent of goods within the next two years. The company has already been tracking 100 percent of its chilled food items via 10 million tagged food totes as they move through the supply chain and into stores. Last year, M&S reported that all merchandise at 750 of its U.K. store locations will be identified via RFID tags, which will be implemented by spring 2015, and that RFID will be employed by 200 of its factories throughout 20 countries (see Marks & Spencer Embraces Change). The company says that it is very near to achieving these goals. Currently, 100 percent of the clothing it sells is now RFID-tagged, as is half of its homeware items—bedding, bathroom products and soft furnishings.

"Having the right product in the right place at the right time makes Marks and Spencer a more efficient business and reduces our footprint," says Richard Jenkins, the head of M&S's RFID program. That, he explains, is the reason that his company has "been using RFID for many years." 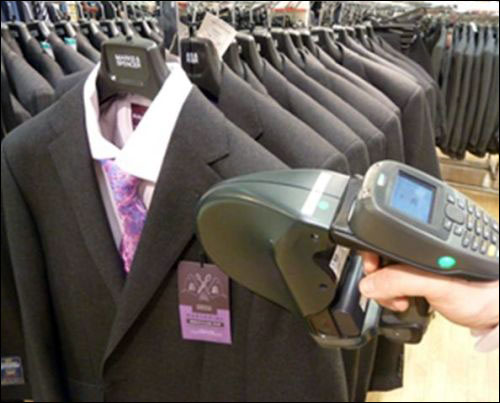 Marks and Spencer was one of the early retailer adopters of radio frequency identification, as it began using EPC UHF tags as early as 2001 to track the delivery of fresh foods into its distribution centers. Since then, the deployment has spread to general merchandise as well, in order to solve the primary problem of on-shelf availability. "We started pretty much with a blank page," Jenkins says. "We couldn't find case studies we could learn from." There was also the challenge of cost—the company started with tags priced about five times higher than current costs. Currently, Marks & Spencer employs RFID tags provided by Avery Dennison, and uses the IER 680 RFID handheld reader from IER at its 380 largest stores.

Marks & Spencer's use of RFID has grown since its initial deployments, Jenkins says, and 80 percent of general merchandise goods are being tagged, equating to 94 percent of the company's nonfood sales. The goods are being tagged at the point of manufacture, and the tags follow the merchandise until it is sold to a customer. This offers the potential of visibility into the goods' movements throughout the supply chain, into a store's back room and onto the sales floor.

Marks and Spencer operates more than 800 stores in the United Kingdom, as well as 420 in other parts of the world, with food accounting for 51 percent of its sales and general merchandise comprising the remaining 49 percent, of which apparel constitutes approximately 80 percent. The retailer is continuing to grow its business with additional stores and greater product sales, Jenkins says—the primary growth areas are in food and online general merchandise—and RFID will enable the company to ensure that products can be delivered to customers quickly as that growth continues.

M&S has learned a lot along the way, Jenkins says. For instance, by studying return on investments for RFID use, the firm found that the technology pays for itself better with some products than with others. Typically, he notes, categories that gain the most from RFID share three characteristics: size complexity, high average selling prices and a long sales life. Products with a long sales life are those that can be sold from one season to the next, versus seasonal or "on-trend fashion" items that are not reordered after several weeks since they become out of date.

When it comes to size complexity, the more sizes—and, therefore, stock-keeping units (SKUs)—of a given product are available, the more difficult it can be to keep each size on the shelf. For instance, different in-seam and waist sizes can lead to 50 different SKUs of a single style of men's pants. It can thus be very difficult for a store to ensure that one particular size is available on the shelf. On the other hand, non-complex-size items have a buffer; there may be many more items for a category onsite, making immediate replacement not as important.

Because M&S captures inventory data via handheld readers every three weeks, Jenkins adds, some fashion items do not gain much from the use of RFID either, since by the time the inventory count is performed, a garment or accessory may already be out of date. In such cases, re-ordering is unnecessary.

Despite some areas in which tagging may offer negligible benefits, Jenkins says, the company's management made a decision two years ago to tag everything—450 million products annually. "Having completeness is an enabler of so many things you can't do if you only have, say, 80 percent," he states. "And having two different processes for RFID-enabled departments and non-RFID departments raises unnecessary complexity."

In the future, the retailer intends to make RFID part of an evolving strategy as it transitions from a majority of sales in brick-and-mortar stores to a more Internet-based model. Stock accuracy can be critical in ensuring that individuals who order goods online receive those items quickly.

By next spring, Marks & Spencer plans to tag the remainder of its homeware merchandise (including kitchenware, children's books and stuffed toys, amounting to another 25 million items). And by 2016, it hopes to tag most beauty and cosmetics products.

In addition to expanding its RFID-tagging efforts to all goods, the company began focusing last summer on ways in which it can further leverage the technology. "My work since July of last year has been around investigating a road map around future RFID use," Jenkins explains. In 2014, M&S launched a program known as RFID Strategic Development, focused on improving RFID-based inventory accuracy and efficiency, and on reducing business costs. Currently, the company's inventory accuracy across its stores is about 83 percent in RFID-enabled categories, but much less in those without RFID. But the reason that the accuracy is at 83 percent rather than 100 percent, Jenkins notes, is that inventory counts are conducted only once every three weeks, rather than more often. The company is now investigating the use of fixed readers installed around a store to document inventory on a daily basis.

Jenkins says M&S has "a detailed roadmap" that includes using RFID tags to enhance the customer experience, loss prevention and operational efficiency. "RFID has proven to improve item-level accuracy in departments and stores," he reports. "This, in turn, improves customer availability and full-price sales performance. Used in this way, RFID is good for customers and good for business."