The hospital is tracking infants and their mothers, as well as assets, utilizing passive and active RFID tags, with the goal of reducing the risk of infant abduction and asset theft.

Feb 16, 2011The Prince Court Medical Center (PCMC), located in Kuala Lumpur, Malaysia, is employing active RFID tags with a built-in infrared (IR) transmitter to protect infants within its facility, as well as a combination of passive and active tags to track equipment and other medical assets.

PCMC is a 300-bed, six-floor multi-specialty-care hospital that draws patients from throughout Asia. In 2008, the medical center began seeking a technology that would prevent any risk of infant abduction, as well as reduce asset theft—before either type of crime could become a problem. "What was needed was a preemptive safety measure," says Shrinita Yogeswaran, PCMC's IT application manager, "that would effectively serve as a secondary deterrent and a back-up to the hospital's existing security measures [for tracking patients and assets]." Those existing security measures required scanning bar codes, she says, or tracking individuals and assets by means of ID numbers printed on labels. 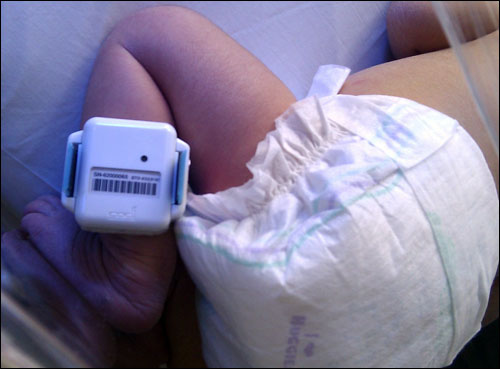 The infant's tag has a tamper-proof strap, as does the mother's tag.

For infant tracking, the hospital sought a solution that employed RFID bracelets worn by infants and their mothers and would provide real-time data regarding babies' locations, and that would issue an alert if a child were ever handed to the incorrect mother. In addition, the facility wanted the tags to have a security feature that could ensure they are never removed by an unauthorized individual.

What's more, the hospital wanted the ability to better track the locations of its high-value mobile assets, such as infusion pumps, telemetry monitors, feeding pumps, beds and wheelchairs. Although that was deemed a secondary measure to the asset-tracking processes it already has in place, Yogeswaran notes, the RFID system proved to provide greater security than the bar-coding solution alone. "With a substantial number of state-of-the-art hardware and medical equipment, the general consensus was that [Prince Court's] existing bar-code-labeling processes would no longer suffice," she states. The medical center's staff has been scanning bar-coded labels on the equipment as it is received from suppliers, or during maintenance, but that process provides no further information about the items' movements throughout the hospital. Not only did the facility require a better method for knowing if assets were being stolen, it also wanted to ensure that employees were able to locate the equipment they needed.


"Many of these assets are easily moved," Yogeswaran says, "and, therefore, need constant monitoring—not only for asset-accounting purposes, but prompt accessibility in the event of a medical emergency."

The resulting solution to both challenges came in a single package—an infant-protection module in an asset-tracking solution from Cadi Scientific that includes Cadi's SmartSense software and hardware. The solution utilizes both active ultrahigh-frequency (UHF) tags—which provide real-time location information regarding patients and some assets—and passive high-frequency (HF) 13.56 MHz tags complying with the ISO 15693 standard for certain other assets that may require frequent cleaning and sterilization, and thus might not accommodate a battery-powered tag. 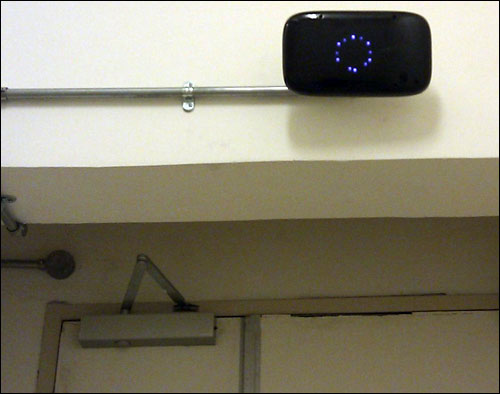 The hospital mounted UHF-IR readers over dooways and on celings.

In December 2010, Malaysian systems integrator Ara TechBis installed a total of 700 RFID readers for the active tags and 150 door-mounted readers for the passive tags. Both types of interrogators were installed throughout PCMC. The hospital purchased approximately 2,200 active tags for tracking infants and assets, as well as 800 passive tags for monitoring smaller assets, or those requiring greater durability than active UHF tags could provide. The passive tags are attached to items in need of maintenance, and or may be exposed to harsh chemicals or liquids. The remaining assets are still tagged with bar-coded labels.

Each active RFID tag comes with an IR transmitter to provide redundancy, and to ensure the tag is read at both close and longer range. The tag has a read range of approximately 8 to 10 meters for RF (26 to 33 feet) and 5 to 7 meters (16 to 23 feet) for IR. As the active tag transmits RF and IR signals encoded with its own unique ID number at preset intervals, the readers within the closest vicinity capture that ID and forward it to the SmartSense software via an Ethernet cable. The software, residing on PCMC's back-end system, links the tag ID number with data related to the patient or asset, and determines the tag's location, within about 2 to 3 meters (6.6 to 10 feet) anywhere within the hospital, based on the particular readers that received the transmission.


Passive tags have up to a 3-meter (10-foot) read range, and their ID numbers are captured at exits, in hallways or at elevators, where they pass near enough to an interrogator to be read. The SmartSense software again links an asset's tag ID with data about that item, and with its location, based on the specific reader that received the transmission. If an asset is determined to be at an exit or location at which it should not be located, the software then issues an alert via e-mail or text message to interested parties, who may include members of the auxiliary police, nursing and finance departments.

When a pregnant woman about to give birth is admitted to the hospital, she receives an active Cadi Scientific battery-powered UHF/IR Mother Tag, which is attached to her wrist via a plastic band. When her infant is born, staff members attach a similar active RFID/IR tag to the baby's ankle, and the child's name and tag ID number are linked with the mother's name and ID in the SmartSense back-end software, which integrates with the hospital's Cerner patient-management system. 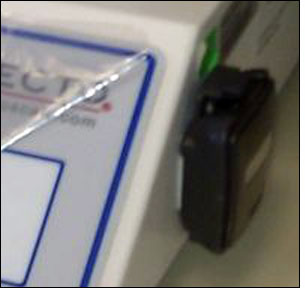 Some assets are fitted with battery-powered UHF-IR tags.

Initially, the infant tag also contained a passive HF tag on which workers could write data, including the mother's name and RFID tag number, thereby enabling them to verify a baby's identity before handing that child to the mother. However, the staff found it too cumbersome to use handheld interrogators to read the passive tags, so the system was modified to incorporate only the active UHF/IR tag in the infant ankle bracelet, which is analyzed by the software against the ID number of the mother receiving the baby.

When an infant is brought within close proximity of his or her mother, the transmission of the baby's active tag is received by the active UHF/IR readers, which forward the child's tag ID to the back-end system. At the same time, the mother's tag also transmits to the readers, and the SmartSense software determines if the two tags are permitted to be together. The system then sends approval to the mother's tag, where a green LED light is illuminated if the correct ID is detected, based on the mother's and child's RFID tags. If the match is unauthorized, a red light is illuminated on the mother's wristband, and an audible alarm is sounded on it as well. The system can not detect, however, if the baby is picked up by someone not wearing a tag, though it can determine if the child's tag is tampered with or removed, or if it approaches an exit.


The infant's and mother's bracelets each contain an embedded circuit enabling the tag to issue a tamper alert if its bracelet is cut, or if the tag is removed. What's more, if an active tag is destroyed and thus unable to transmit, the system is designed to recognize that the tag has ceased transmitting. After a predetermined period of time has elapsed without a transmission, the system sends an alert to the nursing staff, as well as to the auxiliary police force located on site, for immediate response.

If an asset tag—whether passive or active—approaches an exit, the system determines if that activity is authorized. If not, it issues an alert via e-mail or text message to the finance department and other interested parties. If an infant is detected to be leaving the facility, the system will trigger the access door to lock, and will also send an e-mail or text-message alert to nurses and police officers on site. Low-battery alerts are sent to the facilities department. 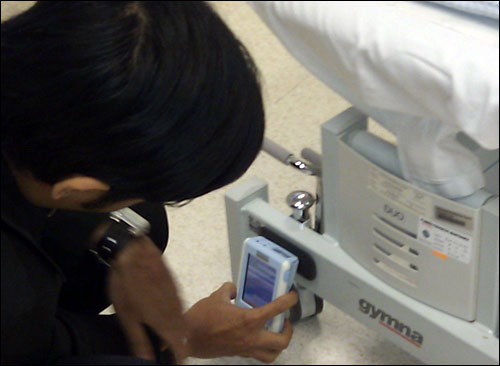 To take inventory of equipment fitted with passive HF tags, staff members use a handheld reader.

The hospital has attached the active UHF/IR asset tags to equipment by snapping them permanently into screw- or glue-mounted brackets to transmit to the same readers. Passive tags can be read by the passive readers installed at doorways, or by handheld interrogators, with read data stored in the same system. Maintenance information regarding an asset's status, such as an inspection or cleaning, is input and stored in the computerized maintenance management system (CMMS) currently being used by PCMC's facilities department. If an asset tag is read on a piece of equipment due for maintenance, that information is sent to the CMMS system, which then alerts the facilities department.

While Yogeswaran is unable to quantify the benefits that the hospital has measured throughout the three months during which the system has been in operation, she notes that, "with RFID infrastructure in place, PCMC has paved the way for future enhancements." Other deployments that will be considered, she says, include patient and personnel tracking, medication administration, and blood-bag tagging. "These implementations can leverage on the already available infrastructure, thus making enhancements more practicable."