Nordic ID has designed its HH85 UHF RFID reader to be lightweight, useable with gloves and able to withstand drops of up to 1.6 meters, with a battery life of at least two full-time work shifts.

Jun 26, 2020Nordic ID has released a rugged yet lightweight handheld UHF RFID reader for use in industrial environments, such as factories or warehouses. The company calls it the lightest ruggedized, all-in-one RFID device on the market (at 22.65 ounces), along with another product in the company's HH that was released last year: the Nordic ID HH83, designed for use in retail.

The Android-based Nordic ID HH85 reader was designed to meet the challenges that the company's industrial and logistics customers were experiencing with existing handheld readers, the firm reports. As such, the firm adds, it is lighter in weight than most such products, is ergonomically designed for use while a person is wearing gloves to make it easier for industrial workers to handle and offers a battery life of up to 18 hours. As such, the device can be easily passed off to others at the end of a shift and does not require recharging for workers who may be in the middle of their work hours. 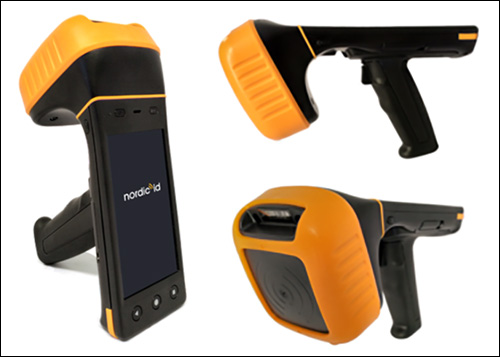 The key features that set the reader apart from other models, says Paul Murdock, Nordic ID's corporate-development manager, are its relatively low power consumption, as well as a larger, more readable screen and built-in Android 9 software. Plus, it does not require a Bluetooth connection to another mobile device, such as a phone or a tablet. In fact, Murdock says, the new reader is one of the toughest, yet lightest RFID handhelds on the market for industrial use.

Nordic ID designed the reader to meet the needs of its customers, Murdock says. Among the shortcomings those customers were experiencing with existing products were the heavy, cumbersome size and weight, along with problems involving battery life. Workers often fail to recharge the device upon ending their shift, for instance, leaving the next employees without a working reader "They wanted something that had a long battery life," he states.

RFID readers often need to be used in warehouse environments or at production facilities at which users may be wearing gloves, working around dust and dirt, or utilizing heavy equipment, such as cherry pickers and forklifts. That means the readers often must be put down and picked up again, and they can be dropped, sometimes from a significant height. What's more, if the device requires recharging after eight hours, it is important for workers to connect it to a recharging station before leaving for the day.

Additionally, the company notes, many existing readers for the industrial market have small screens that can be challenging to read. "[There are] many ways you can approach making a device," Murdock says. Numerous companies develop products based on existing platforms, he adds, and with limited user input. "Our approach is to ask the customer first, 'How does the product need to be used?'"

Such an approach, Murdock says, offers an alternative to simply building new technology and finding a use case. "At the end of the day," he states, "you have human beings using it, so we've taken the approach of asking, 'How do we design something that fits the purpose?'" The company has also opted to focus its product design on specific vertical markets, rather than on developing products intended for universal use, such as in warehouses or stores.

In August 2019, Nordic ID released its retail-based handheld version, the HH83, which is lightweight and comes with no pistol grip. The reader is designed for one-handed operation by sales associates and other store personnel who may need to keep it in a holster or a pocket. It comes with a built-in camera enabling users to take pictures and post them online, and it features incident-reporting functionality. If, for instance, a user notices damage to a particular box as goods arrive, he or she can read the tag ID number, take a photo of the damage, link that image to the tag ID and report the problem to the appropriate parties. The device also comes with a built-in NFC reader.

The HH85 comes with many of these features as well, but is designed for a more rugged environment, the company reports. The pistol grip is present and enables easier use for a person wearing gloves, according to Toni Heijari, Nordic ID's head of device development. For the industrial version, as well as for the HH83, Heijari says, "We have optimized power management" to lengthen the battery life well beyond a single full-time shift. In fact, he adds, "A lot of time has been spent optimizing" so that some of the reader's power-consuming features will go dormant when not in use. 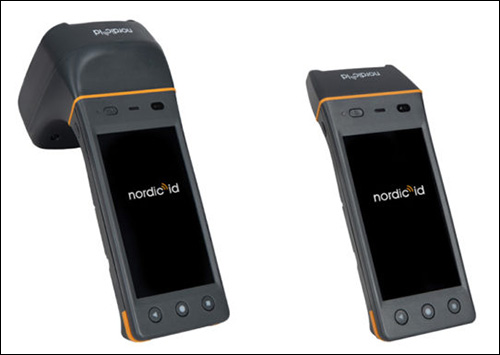 The handheld accomplishes a 50-foot read range, on average, though it has been tested at greater distances, Heijari notes. "Nordic ID has years and years of experience in designing antennas and radios," he says, which helps enable the long read range. The reader additionally comes with an adaptive cross-dipole antenna with the ability to read omnidirectionality, as well as at a distance or up close. Nordic ID developed this antenna approximately nine years ago, Heijari says, though the HH85 employs a new generation of that antenna, so it not only offers a long read distance but a wide read area.

"We have fine-tuned it over the years, which is what enables an antenna design that can adapt to numerous applications." Heijari reports. For instance, a short, more precise read range can be accomplished in tight spaces. If users wish to read or write to a tag within a tight space, the read range can be decreased in order to ensure the tag being read must be within a few inches or more from the device. In that way, Heijari explains, users can be sure they do not erroneously capture tag reads from other assets, inventory or equipment in the area.

The devices feature an application programming interface so Android-based software can be leveraged to talk to the reader. It has a built-in 2D barcode scanner, LTE and Bluetooth radio capability, and WLAN and GNSS functionality, and it also includes an accelerometer, an ambient light sensor, time-of-flight and proximity sensors, a pedometer and a gyroscope.

Nordic ID plans to begin shipping products in July 2020. Deployment is now under way by several companies. In one case, the technology is being used to track the movements and locations of assets for the flower supply chain, while in other scenarios, manufacturers, such as those in the textile and aviation industries, are deploying the reader for Industry 4.0-based efforts.

The HH85 spent at least a year in development before the product announcement, and some of that time involved testing the device. For instance, to test the ruggedization, the company embarked on a series of drop tests. "The durability of the unit has been on the table from the beginning of design," Heijari states, "and I think we have been able to get that right." That involved dropping the unit from a height of about 1.6 meters (5.2 feet), from every angle possible.