The company's partners and customers are currently testing its M730 and M750 ICs; Smartrac has announced inlays and tags based on the new products, while Checkpoint Systems will release five new inlays as well.

Dec 05, 2019Impinj has released the first two products in its Impinj M700 RAIN UHF RFID series of integrated circuits that it says are smaller by half than other UHF RFID chips on the market. The company reports that the new chips, known as the M730 and M750, along with future M700 series products, will be more sensitive and have a greater bandwidth in order to operate in the European, North American and Asian markets. The ICs also feature a functionality known as "protected mode" so that they can be rendered invisible for security and privacy purposes, and then be turned back on by authorized users.

The company developed the ICs based on improved manufacturing processes, as well as through engineering of the chips themselves, says Chris Diorio, Impinj's CEO. "The M700 series is a family of products using some fundamental technology advancements," he states. One result, Diorio adds, is that twice as many chips can be built onto a single wafer than with other UHF RFID chips, allowing twice as many inlays Additionally, he says, sensitivity is about 10 percent higher than for similar chips. 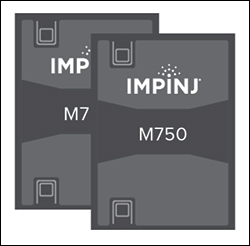 The new chips are designed to maintain that higher sensitivity when the reader's speed is increased, meaning tags can move through reader gates faster and in higher volumes, and that handheld readers can capture more tag reads in less time. The M730 and M750 offer different memory configurations, the company reports. The M730 has 128 bits of Electronic Product Code (EPC) memory for users that require space for extra ID numerals as part of the EPC number, while the M750 comes with the standard 96 bits of EPC memory, as well as 32 bits of additional user memory. Both models are compatible with GS1's UHF Gen2V2 standard.

Since announcing technology advancements this past spring that serve as the foundation for its M700 family of products, Impinj has been working with partners and some end users to begin developing inlays and applications using the new ICs. The new family of products, Diorio says, follows Moore's Law with regard to the shrinking of integrated circuits that provide greater speed and capability, and are poised to enable RFID technology use in greater volume and in new applications, such as those that require very small form factors or greater privacy protection.

In fact, Diorio says, depending on the design of the inlay in which the IC is incorporated, the new chips will offer approximately 10 percent greater sensitivity, both when receiving interrogation signals from a reader and when responding. They will also allow readers to operate at faster speeds, he claims, while losing only minimal sensitivity. Thus, as a pallet loaded with tagged items moves through a reader-equipped warehouse door, for instance, more of those tags will be read than previous tags would, even if the pallet is moving faster through that portal.

Because the ICs are smaller, Diorio explains, they may be embedded directly into products, such as in the form of RFID-enabled washable labels sewn into garments, or as tags built directly into a garment. The additional sensitivity ensures that the tags can still be readable even when incorporated directly into a product.

The protected mode feature enables the new ICs to be turned "invisible" by a standard RFID reader. For instance, if a tag were sewn into a garment and a customer purchased that item at a store, a sales associate could read its tag and place it in protected mode at the point of sale. As the shopper left the store, the tag would then not respond to interrogation by an RFID reader at the exit, making it effectively invisible to that device. This provides an alternative to some existing RFID tags that can be placed in untraceable mode, Diorio notes, since they may still respond to interrogation. With the untraceable mode, a tag's response can be restricted to parts of the EPC, TID or user memory, or the tag's read distance can be significantly reduced.

The value of the protected mode rather than the untraceable mode, Diorio explains, is the lack of any response by the tag when interrogated, thereby rendering it completely undetectable by any readers and thus thwarting hacking efforts. If a customer were to return the garment to the store, an authorized reader could switch the tag back out of protected mode, and it would then respond to subsequent RFID interrogations. That feature makes the return process easier, the company explains, than if a new tag must be generated whenever an item is returned. 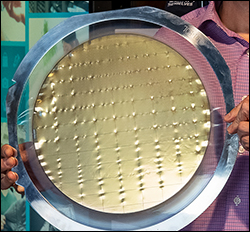 The company claims twice as many chips can be built onto a single wafer than with other UHF RFID ICs.

In addition, the M700 series of ICs can accomplish transmission in a wider bandwidth covering the 920 MHz frequency band used in North America and Asia, as well as the 866 MHz band more commonly used by readers in the European Union. That means a single UHF RFID tag could be read across the globe.

Since Impinj's technology partners (inlay manufacturers) began working with the new ICs, Diorio says, "We've had great feedback. I believe this chip is our most game-changing introduction since the Monza 1 [Impinj's first UHF RFID chip] in 2005." With smaller, more sensitive chips, he predicts inlay manufacturers will be able to offer inlays that are not only smaller, but lower in cost and more effective, bringing the industry closer to a goal of a lower-cost RFID tag. For instance, the Japanese government's Ministry of Economy, Trade and Industry indicates that it is seeking a 1-cent tag to enable the deployment of billions of tags on products sold at convenience stores and supermarkets.

The new products are now available in limited quantities and are expected to be made available in high volumes during the first quarter of 2020. The company anticipates that inlay manufacturers will release new products using the chips in the coming months. In fact, Smartrac has announced its new MINIWEB inlays and tags based on the M700 products; the MINIWEB, which is slated to be made available in sample quantities in early 2020, is designed to serve the retail and supply chain markets, with a form factor of 42 millimeters (1.7 inches). And Checkpoint Systems has announced that it will release five new inlays using 18 percent less materials than predecessor inlays; the company's Njord inlay will measure 44 millimeters by 30 millimeters (1.7 inches by 1.2 inches).

During the coming year, Impinj plans to release ICs with other features, such as brand protection. "We intend to develop more capabilities" into future products, Diorio states.